Disclaimer: this review was made possible thanks to a screener link provided by the film’s UK distributor, Curzon Artificial Eye.

Content warning: discussions and descriptions of sexual abuse and predatory grooming in Slalom.

In these last few years, a very public reckoning has been in (frustratingly intermittent) progress against our patriarchal society’s distressingly rampant and normalised attitudes towards sexual abuse and most forms of grooming.  A series of revelations involving high-profile abusers in the film industry empowered thousands of victims across the world to be able to speak up about their own experiences, spreading the #MeToo and Time’s Up movements through to the music, professional wrestling, and sports industries to finally out the monsters who had been allowed to hide in plain sight for so long.  Although it’s certainly no substitute for actual prosecuted justice (shameful figures that only keep dropping as the years pass), at least this difficult conversation is finally happening in the open.  This discussion has also seen an increase and evolution of how creatives approach the topic of abuse in the art released since, with shows like A Teacher and I May Destroy You seriously engaging with the psychological effects of abuse and affording genuine humanity back to their victims as a means of interrogating wider societal systems and reclaiming personal agency.

Charlène Favier’s debut feature, Slalom, aims to break down and then methodically piece together exactly how this kind of predatory behaviour manages to work on its abuser’s victims.  Her and co-screenwriter Marie Talon (with credited assistance from Antoine Lacomblez) bringing 15-year-old Lyz Lopez (Noée Abita) into contact with ex-ski champion turned professional coach Fred (Jérémie Renier, never quite as charming as it feels like he’s initially supposed to be but otherwise really solid for how he underplays the role), her psychological baggage creating a perfect storm for Fred to prey upon.  Lyz is a highly-promising young prospect who longs to become a champion, fiercely competitive whilst also willing to rise to and slightly push back on Fred’s feet-to-the-fire unrepentant verbal abuse style of coaching.  When she’s bombing down the slopes, she’s in her element and freed from her mind’s weight with a palpable exhilaration that Favier thrillingly communicates with bracing speed and control.

Off the slopes, however, cracks begin to show.  She’s unable to relate to or adequately socialise with any of her fellow trainees, whether they sincerely try to (Maïra Schmidt’s Justine) or just act like arseholes (Axel Auriant’s superfluous Max).  She hasn’t spoken to her divorced dad in a long time and her overworked mother (Muriel Combeau) can only sparingly show up, although Lyz’s resentment of her has clearly been festering for a long time beforehand.  She couldn’t care less about her academic studies, leaving her at constant risk of being kicked out due to failing school grades.  Lyz is isolated, physically and mentally since nobody she knows seems to pay close enough attention to how she’s really doing… nobody except Fred, that is, who quickly singles her out as his star pupil to invest a lot more time and attention into.  Unsurprisingly, despite the mountains of red flags in his behaviour around Lyz – clearly highlighted by Favier and cinematographer Yann Maritaud, whose work here is really vital to the film’s success – she finds herself drawn to him and desperate to impress in more than just her skiing.

And so Fred sets to work turning Lyz into his own personal property, right in front of his wife (Marie Denarnaud) no less.  First worming his way into Lyz’s life by giving her the validation and attention she cannot get from her own family, then isolating her further from her teammates with additional practice time, turning her on her own parents by appealing to that driven competitive nature and telling her what she wants to hear, before outright consuming her once all possible escape options have been successfully closed off.  Favier unsparingly plays this out step-by-step, at every turn demonstrating precisely how it affects Lyz mentally and just how hard it is for her to break free of this traumatic control in a manner that, at least to my eyes, never fully felt exploitative even if there are times where everyone seems to prioritise symbolism-filled shots over all else.  There’s a pivotal and highly-distressing rape scene at the end of the second act, where Maritaud’s camera and Favier’s staging are arranged as such to make it look like Fred is completely overwriting Lyz’s physical presence too, where I’m not fully convinced the execution is as deftly handled as it needs to be in order to avoid the baggage of decades of exploitative depictions of rape in filmed media.

The lack of explosive melodrama otherwise does help avoid the worst of it in that regard.  Favier and her team are going for something which is deeply unsettling and suffocating in mood rather than building to some kind of thriller-like bombast, a la Xavier Legrand’s similarly-austere looking but actually-quite-trashy Custody from a few years back (although that’s not about sexual abuse).  Her frame is never sexualised even though she and Maritaud engage in a lot of individual body part close-ups, warning signs of improper behaviour and later an indication of how Lyz’s own sense of self has been slowly stripped down to these individual pieces she truly has no control over other than on the slopes.  Abita’s performance emphasises that evolution with considered aplomb; how curiosity turns to attention turns to loss without Lyz truly understanding how she’s even gotten to this point until it’s seemingly too late.  She reminds me as a performer in many ways of Anya Taylor-Joy; someone who can logically guide the viewer through a character’s personality shift that is, by design due to these imperfect manipulatable things called emotions, illogical and the balancing of a character’s contradictory thoughts and impulses convincingly.

Favier is much less interested in the structural reasons for how the behaviour of coaches like Fred end up being not only swept under the rug but outright normalised under the unspoken social contract of victorious glory coming above all else, however.  She’s more fixated on the psychology of the abused; the mental toll it takes on them, how they are targeted and broken down.  This does mean that Slalom is only fleetingly tied specifically to the power structures and abuses thereof in the world of sport and, coupled with the lack of deeper psychological insight into Fred beyond dialogue that can’t help but feel a touch cliched, resultantly the film and Favier aren’t doing a whole lot new or different with this subject matter; horrible as that may be to say.  Despite the step-by-step demonstration of how abusers sink their teeth in, there’s a relative lack of specificity with regards to how the sporting world can enable and protect this behaviour which seems like a missed opportunity. 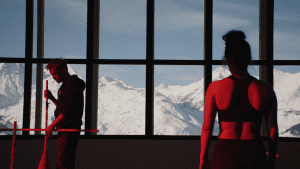 Of course, that could just simply be the point.  Films about sexual abuse and grooming are likely to end up hitting the same beats because real life abuse often works the same way.  It’s so normalised, accepted and protected that the interchangeable nature of Lyz’s story, even with additional extenuating circumstances that should perpetuate it, is exactly the damning point.  You can also arguably apply that same defence to the other drawbacks I have with Slalom.  Yeah, every character other than Lyz and Fred are underdeveloped, that’s the point; it demonstrates Lyz’s social maladjustment, isolation and lack of viable connections to escape from Fred’s grasp.  Yeah, the last third loses a fair bit of narrative momentum and the ending is kinda unsatisfying, that’s the point; once an abuser gets full hold of their prey, they sometimes don’t know what to do next, and nowhere near enough versions of this relationship end with a satisfactory hauling off to jail so you gotta savour the little declarations that let you reclaim your sense of self, even just a piece.

And… yeah, fair, honestly.  Each of the things that mean I don’t find Slalom truly great are the sort of critiques that feel really disrespectful no matter how I phrase them.  But, for as well observed as the psychology of its lead character is and the perpetually unsettling menace (with interspersed chasers of exhilarating freedom on the slopes) that Farier brings behind the camera, I wasn’t bowled over the same way I was by works like The Light of the Moon or I May Destroy You and the suddenness of the ending puts a dampener on things regardless of whether that’s the point or not.  It’s very… academic or clinical, which somewhat limits the heights it can reach.  That said, it’s a very solid debut with a really strong lead performance I can still recommend.

Slalom streams exclusively on Curzon Home Cinema from today, with plans for a cinema release in the future.