In preparation for the return of the Star Wars franchise to the big screen next month, we decided to take the next three weeks to look back at the six movies we already have to see where we stand so far. Now a cultural institution, George Lucas’ famous space opera has a giant fanbase eagerly awaiting the next installment, which no longer features Lucas at the helm and has instead been made by JJ Abrams and Disney after the multi-billion dollar acquisition of Lucasfilm in 2012.

Though the first film in the original trilogy, ‘A New Hope’, is some two decades older than this iteration, it makes sense to work in episode order and delve in to the prequel trilogy first. So without further ado… 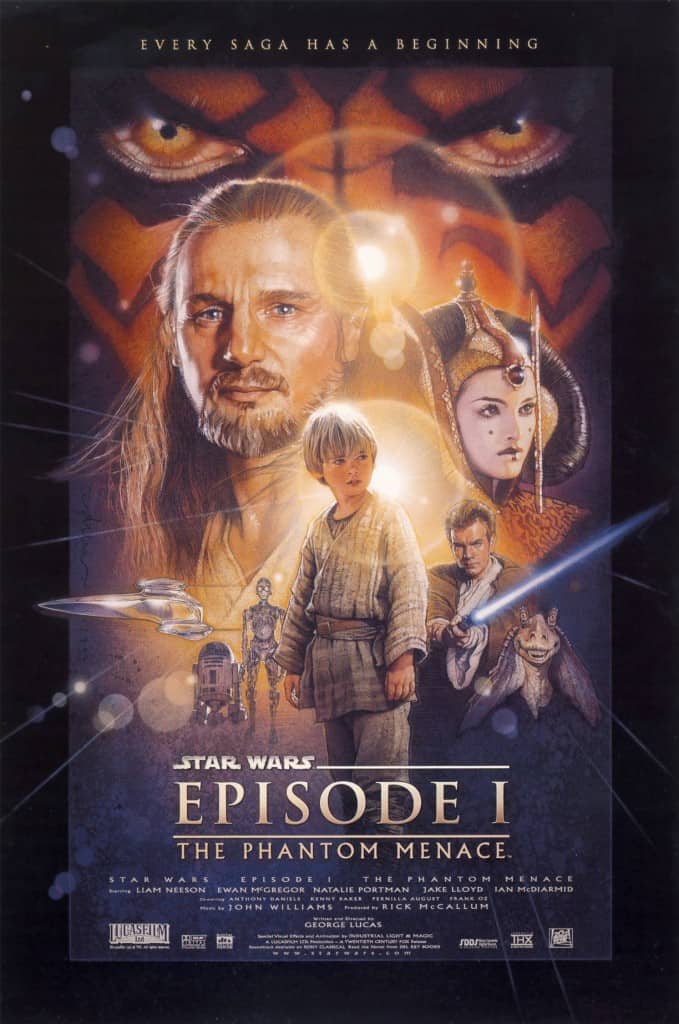 It’s worth remembering that ‘The Phantom Menace’ is the only Star Wars movie to break the $1billion dollar mark at the box office, a fact that derives from a mixture of the excitement that the franchise was back on the big screen after 16 years and the 2012 3D re-release which helped to push it over the precipice. Unfortunately, as Michael Bay’s dismal ‘Transformers’ and James Cameron’s bloated and overrated ‘Avatar’ prove, box office takings are not a marker of quality, and boy is that the case here.

Let’s just get straight to the point. ‘The Phantom Menace’ is dreadful. If we didn’t have the other two prequel films to look at, it could be possible to chalk this disaster up to the fact that Lucas hadn’t actually directed a film since ‘A New Hope’, a whole 22 years before this film was released. The film can never quite decide what it wants to be, with inexplicable tone shifts that are intended to allow Lucas to explore his comedic side, only to discover that his comedic side had long since shrivelled in to non-existence, if it even existed in the first place.

We start off with the traditional opening crawl, an iconic part of the franchise, which here serves to kill enthusiasm rather than to enhance it. Talk of taxation and trade routes does the opposite of whetting your appetite, the premise of two Jedi knights being sent to stop a blockade doesn’t really strike you as the best focus for a film.

Not to worry, because the film only gets more convoluted from there. Blending together an attempt to involve us in the political intrigue of the Republic and a desire to take us on a journey of mindless fun doesn’t sound like a good mix, and it really, really isn’t. One minute, we’re with the wonderfully slimy Ian McDiarmid discussing trade laws and debating votes of no confidence, and the next we’re with one of the most misjudged characters of all time, Ahmed Best’s Jar-Jar Binks, as he potters about attempting to engage us in slapstick humour but only really managing to come off as being a bit racist, a problem with many of the aliens in this film, who seem inexplicably to have been given certain distinctive accents, to signify just how annoying/villainous they are.

The pod racing sequence is another mark of just how all over the place this film is. With their ship damaged, Qui-Gon and Obi-Wan make their way to Tatooine in a sequence you might think would be fairly short, but instead takes up a significant portion of the first half of the film. Indeed, the racing itself feels like it’s been taken from a different film entirely, some knockoff parody sci-fi movie complete with stupid fart jokes, the most memorable of which being an inexplicable occasion where we cut to Jar-Jar and an Eopie, a camel-like creature. The creature farts, Jar-Jar looks disgusted. That’s it. In a film replete with pointless scenes, this one may well be the most inexplicable which actually makes it hilarious, though probably not for the reason Lucas intended.

This sort of jarring scene is indicative of Lucas’ struggle to both entertain long-term fans and bring in a new generation. He really succeeds in doing neither, the trade sequences are far too boring for newbies, and probably even die-hards, and characters like Jar-Jar Binks are so infuriating that you just want to punch the screen you’re watching it on rather than get emotionally invested in any way.

Then come the midi-chlorians. This subject has obviously been discussed to death, but the concept is no less ridiculous. Lucas’ transformation of the Force is one of the strangest things he does because he knows that it makes the message of the original trilogy totally redundant. No longer are Jedi people who harness a power that is more spiritual than anything else and available to be harnessed by anyone with the right training, they are now an elite group of superhero-esque people who stand above the rest. It’s an alienating alteration and one that is both confusing for a new generation and plain annoying for veteran fans.

After all that, we get to the acting. Aside from Ian McDiarmid, whose performance is really the only actually good one in the whole film, we are treated to a veritable wasteland of acting prowess. It’s weird to think that a bunch of the people in the film would go on to have successful careers and give brilliant performances, like Natalie Portman, and others, like Liam Neeson, had already excelled. Here Lucas’ script reduces them all to blank-faced wooden amateurs, delivering their lines like they’re performing at a village fete for a crowd of uninterested people waiting for the Punch & Judy to start.

Portman is a particular victim. On the back of this performance I would wholeheartedly have predicted that she would fade in to obscurity, such is the lack of any acting charisma in each and every line she delivers. Basically all characters, aside from perhaps Ewan McGregor’s Obi-Wan and Neeson’s Qui-Gon, who manage to have some bearable conversations, have no chemistry with each other at all, to the extent that it would probably be more interesting to mute the film and come up with your own dialogue, which hopefully would at least amuse you for a while.

Jake Lloyd also stands out as giving a cataclysmically awful performance as Anakin, a character you’re supposed to care about but instead marvel at Lloyd’s true inability to make anything sound sincere. “There’s something about this boy”, Qui-Gon says mystically at one point, a remarkable statement given the ineptitude of the performance, making the apparently brilliant Anakin the largest wet blanket of all time. Child acting has always been considered sketchy, but Lloyd takes it to a completely different level.

It may be difficult to tell, but upon rewatching ‘The Phantom Menace’ I actually disliked it less than I remember. Somewhere in there the magic of Star Wars still lingers, cloaked in Lucas’ delusions of grandeur , lost within the swathes of soul-crushing misery that make up his script. There are some well-shot lighsabre fight scenes, and Lucas still has a good eye for set design and John Williams’ score is reliably bombastic, but while I was slightly surprised by my more mellow reaction to it, there is no denying that ‘The Phantom Menace’ is a ludicrous, boring experience that feels like it’s over three hours long but only clocks in at just over two.