We continue our examination of Star Wars with the second film in George Lucas’ prequel trilogy. It’s worth saying from the start that this film is an improvement from ‘The Phantom Menace’, which is a welcome relief, but that does not equate to ‘Attack of the Clones’ being a good film sadly. While mastermind George Lucas’ plot ideas are more interesting, he still suffers greatly from an inability to write a halfway decent script, resulting in the downfall of many scenes that could have been more impactful. 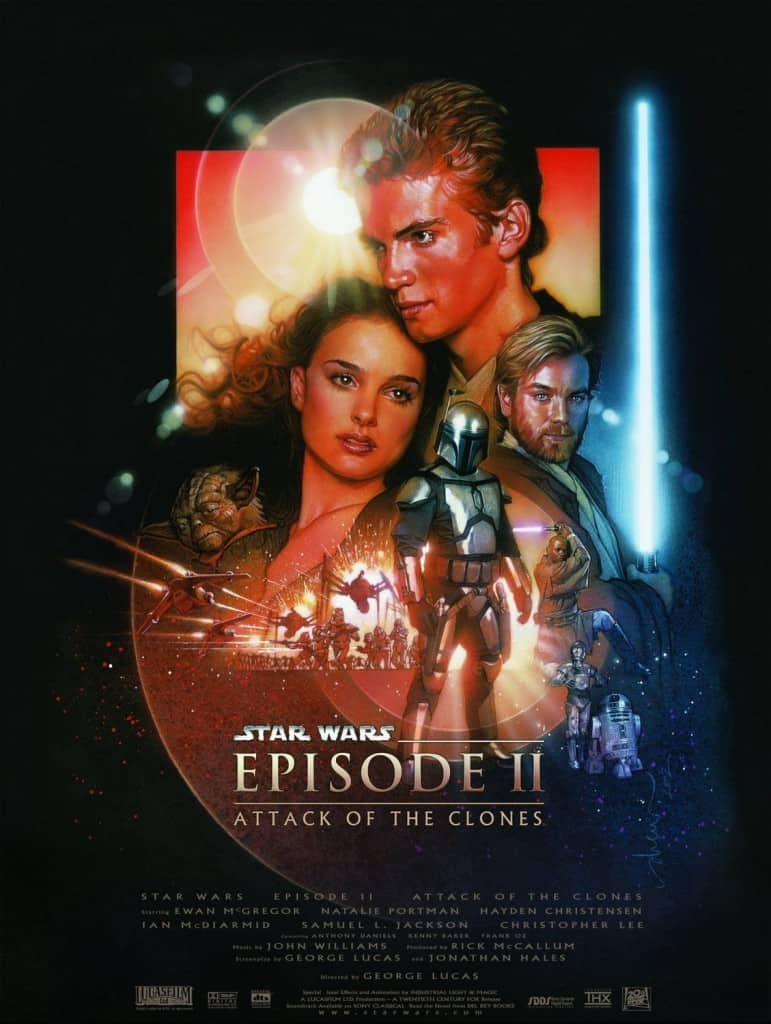 One thing that Lucas does refine is his visual sense. One of the main strength of this film are its visuals, the space environments are often breathtaking and the set design is great. Unfortunately often the set design is better than what’s actually going on, meaning that you’re admiring the small details in the background rather than concentrating on the actors, because unfortunately most of them still have no chemistry.

Since Anakin is now older, Lucas replaces Jake Lloyd, who was terrible in the first film, with Hayden Christensen, who is arguably even more terrible in this one. Where Lloyd was a charisma vacuum, Christensen resembles a block of wood for the majority of the film, delivering lines with such impassivity that he ruins every conversation he’s involved in. Anakin is with Ewan McGregor’s Obi-Wan for the vast majority of this film, and McGregor is left doing all the work, such is Christensen’s ability to make anything he says sound like he’s reading directly from the phone book. A ping-pong ball with a smiley face drawn on would probably have more personality.

The romance between Anakin and Natalie Portman’s Padmé Amidala may well be the most baffling part of the whole film. Portman’s performance is improved from the first film, though still a long way away from what she is now capable of, but she can’t do anything to make the words coming out of her mouth any less baffling. Lucas’ script seems to think that the chemistry between the two characters is there to see, but in fact it’s quite the opposite. There are some laughable sequences where Anakin ‘charms’ Padmé with some of the worst romantic speeches ever written (his ruminations on sand are particularly absurd) and we’re expected to believe that Padmé, who generally seems like a reasonable human being, would fall for the whiny, pathetic and altogether uninteresting Anakin. There is a moment, after Padmé declares her love for him, where Anakin says “you love me?” as if surprised (in a rare example of Christensen managing to convey something authentically) and I felt exactly the same.

These plotlines detract from the bulk of the storyline, which is actually quite interesting. Ian McDiarmid puts in another excellently unctuous performance as Senator Palpatine/Darth Sidious, though it remains baffling just how the likes of Yoda are oblivious to his deception. Lucas’ explanation that the dark side of the Force is shrouding their judgement may be tenuous, but it’s ultimately serviceable enough to allow the film that plot device. His machinations to destabilise the Republic are clever and intricate, Lucas dealing much better here with the political side of events than he did in the first film by blending in some strong action in to the mix, and it’s always nice to see Christopher Lee, here playing Count Dooku, a vital part of Sidious’ master plan.

‘Attack of the Clones’ is better plotted than its predecessor and at its best can be enjoyable and even somewhat engaging. Sadly, it has too many pitfalls for it to be a successful, the largest of which being Christensen’s utter lack of believability as Anakin, and the fact that so much of the story revolves around the character mean that scenes regularly become laughable. He isn’t helped sometimes by Lucas’ dialogue, which can be stilted and sometimes so hammy it’s a joke. We’re treated to an improvement here, but ultimately not enough of one.