And so we move away from the prequel trilogy and on to the originals and a time when George Lucas could still write a half-decent script. This film, originally titled ‘Star Wars’ before Lucas knew just how popular it would become, charts the start of Luke Skywalker’s journey towards becoming a Jedi and introduces us to the likes of Han Solo and Princess Leia. It’s a considerable improvement on any of the prequels, boasting charm and regular laughs together with enjoyable action sequences and strong character interactions, but it is not without its flaws. 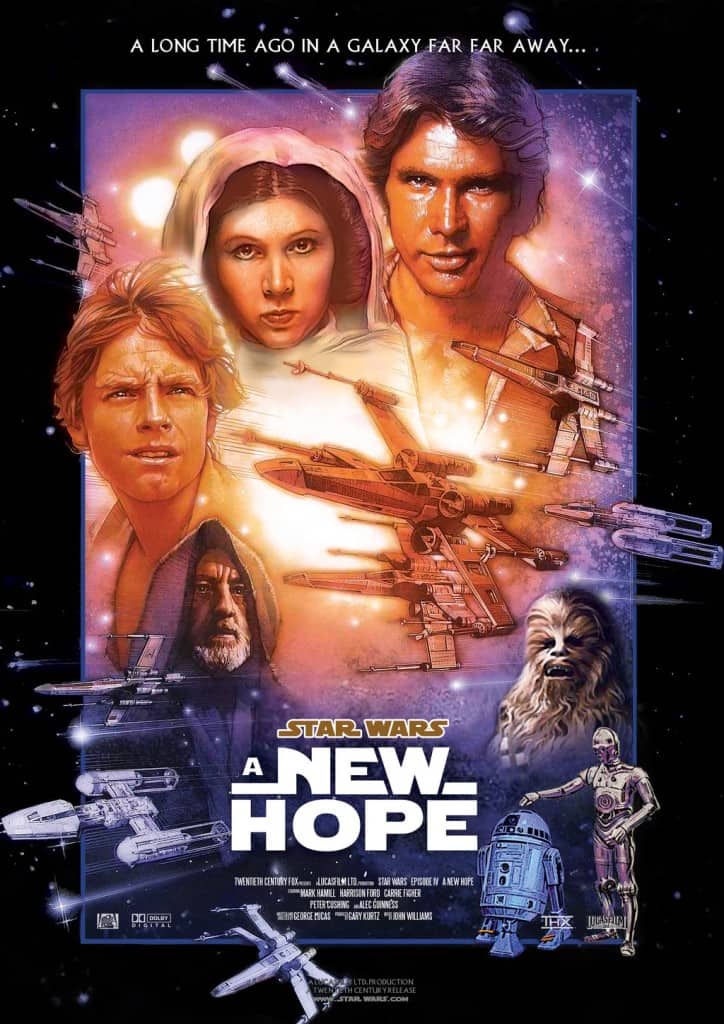 The success of ‘A New Hope’ lies in its ability to immerse you in to its universe and characters. Lucas is excellent at focusing on his grandiose settings, and the interior of the Death Star, where much of the story takes place, is wonderfully shot and provides a great backdrop to the action while snappy interactions and solid character exposition fill moments where he cannot focus on his set designs. Particularly successful is. Alec Guinness as Ben Kenobi, whose quiet authority and kindly but wise manner would have been hard to pull off for most actors, but Guinness was a stalwart of the profession and did it with ease. Harrison Ford is the other standout, playing sardonic smuggler Han Solo with gravitas. Ford has never been known for nuanced performances, his straight-edge style making him perfect for the role of action hero, but he’s also capable of portraying intricate changes in Solo’s mindset throughout the film.

The film’s weaker aspects are embodied in Lucas’ failure to properly embrace tragedy and portray it in a powerful manner. This is something he tried to do with the prequels with no success, but while in those films it’s just one of many failures, here it’s overshadowed by the good elements. Particular moments that come to mind are the destruction of Alderaan, something that Leia, who is from the planet, originally protests and then proceeds to totally forget in order to get an adequate amount of sass on, and the brutal murder of Luke’s aunt and uncle, which he looks upset about for a few seconds before, again, barely mentioning it at all for the rest of the film.

Sure, Lucas uses these plot points in order to provide his characters with motivation, explaining Leia’s lack of reaction away later when she says that there is no time for grieving, but they’re much more than that. These are incredibly substantial events that need to be addressed to a more serious extent than they are, and yet are strangely cast aside. Luke even has a grief-stricken moment when he believes Ben to be dead, but it never seems to cross his mind again that his adopted parents were burned to death with their bodies left in front of their house for all to see. Apparently this is an unremarkable and totally reasonable occurrence.

These things do take away from ‘A New Hope’, a film full of fun and exciting, adventurous settings and relateable, interesting and diverse characters, but it is ultimately a solid start to the trilogy, and one which definitely deserved sequels.