Having got the prequel trilogy out of the way first, it’s nice to be able to say that the improvements continue here, and it’s notable that this is the film in the original trilogy on which George Lucas has the least involvement. Obviously the saga is his brainchild and everyone is indebted to him for coming up with it, but it feels like this may have been the best way to go about it, taking Lucas’ story and allowing others to mould it in to something that works in all aspects. Indeed, here we get none of the awful lines that adorn the prequel trilogy and characters are fully fleshed out, making me think that the few problems I had with ‘A New Hope’ would have been resolved if director Irvin Kershner or writer Lawrence Kasdan had worked on that film. 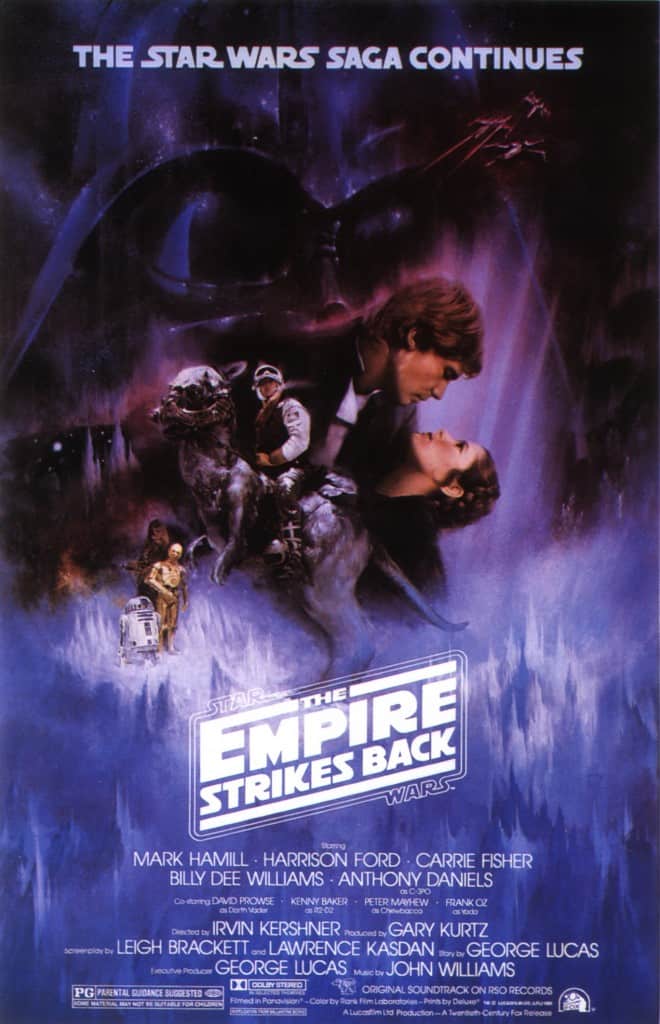 This film benefits from those new creative influences in the sense that we get to explore far more than in the previous film. Lucas has always been a master of visuals, but that sense is retained here and we still get some wonderful wide shots, but we are also treated to interesting character development, powerful and iconic scenes and engage with the film on a deeper level than the previous episodes reviewed here. Whereas in ‘A New Hope’ we are treated to solid spectacle and some rollicking action scenes, here the level of engagement is on a higher level, and that must be credited to Kasdan and Kershner.

‘The Empire Strikes Back’ represents the high-water mark of the series (at least until we review ‘The Force Awakens… we’ll see) largely because of how well everything comes together. Gone are the disjointed moments of previous episodes, and in comes the sense that we’re finally experiencing a whole mythology with depth and ingenuity. The reason ‘Star Wars’ is such a success as a space opera can be found in this film, from John Williams’ epic score down to its intricate plot details and sudden twists, it is a large story in the best sense of that term, making you feel like the whole galaxy is involved. Cinematography by Peter Suschitzky is excellent, capturing the scale of the universe excellently and making scenes feel claustrophobic or vast at will. Darker and far cleverer than most popcorn movies, ‘The Empire Strikes Back’ almost does the job of justifying the Star Wars hype on its own, which is a gargantuan task.