We come to the end of the original trilogy with ‘Return of the Jedi’, a film that doesn’t quite have the power of the previous one, but provides a fitting and enjoyable end to the trilogy. Some have called this episode ‘Muppets in Space’ which is an amusing and quite valid way of looking at the extended ewok sequences of the film, a species that Lucas appeared to lose his mind over, releasing multiple awful specials where they took centre stage with horrible results. If you think of them as part of a larger whole though, ‘Return of the Jedi’ is a thoughtful and interesting film about redemption which is also full of pure cinematic experience. 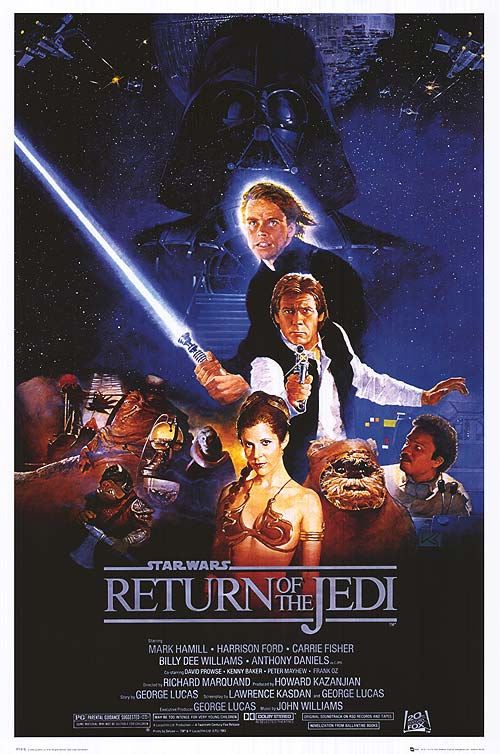 Following on from ‘Empire Strikes Back’ this is another film that Lucas relinquished complete control of, bringing in Richard Marquand to direct and continuing to work with Lawrence Kasdan on the script. These influences once again allow the films to be more than the visual spectacle they often fall back on when Lucas’ scripts fall flat and we get a mixture of that visual sense of wonder as well as some well scripted story, the relationship between Luke and Vader being the driving force of the film.

The opening section, where we spend a lot of time with Jabba and his cronies, feels like a long prequel for the main action, but it is nevertheless a fun ride complete with gladiatorial battles and interesting creatures and with that heist movie sensibility that is quite different in tone to the rest of it. Once we get down to the nitty gritty though we start to reach that operatic atmosphere again, the tale of the Rebel Alliance against the Empire being a far grander escapade than a few small battles and a prison break. Luke and Leia confronting who they are and just who exactly their father is continues to be the most human storyline in the whole saga as they wrestle with who they are and who Vader wants them to be, and this is where the film is at its strongest.

‘Return of the Jedi’ could do without the extended Ewok scenes and criticisms that Lucas’ fascination with the creatures undermined some of the gravitas of the power of the Empire are entirely valid, their battle scenes verging on the comical, but it’s to the film’s credit that it manages to overcome this and still be a powerful story and enjoyable cinematic experience, fulfilling its aim to engage you in a fully fledged space opera that sticks to its guns and provides a fitting end to the trilogy.