With the endless hype and secrecy finally over, ‘The Force Awakens’ opened to a massive fanfare, gushing reviews and general audience satisfaction. Everyone breathed a sigh of relief that this time they weren’t as catastrophically disappointed as the last time the Star Wars franchise made a return, memories of 1999’s ‘Phantom Menace’ expunged and replaced with happy thoughts. It is completely true that the revamping that has gone on following the prequel trilogy has been very helpful to the franchise since unfortunately George Lucas lost all ability to write in between ‘Return of the Jedi’ and ‘Phantom Menace’, the addition of JJ Abrams and return of writer Lawrence Kasdan injecting some lost impetus back in to the franchise. Despite the fact that both the direction and writing are markedly improved, ‘The Force Awakens’ sadly feels too derivative and respectful of previous iterations, and ‘A New Hope’ particularly, to break much interesting or innovative ground, making for a film that’s enjoyable but not as daring as it should have been. 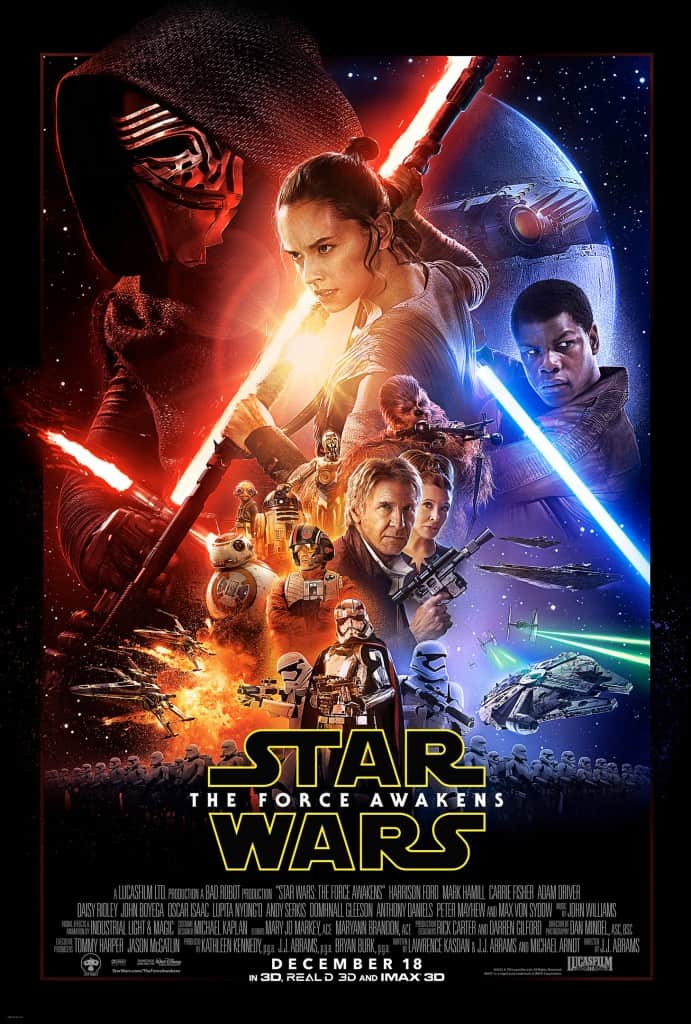 There are many good points though. Both Daisy Ridley and John Boyega give strong performances as Rey and Finn respectively, the two new leads who we will follow for the upcoming trilogy. Ridley in particular looks completely at home in a franchise as large as this, which is remarkable considering her lack of experience, but her and Boyega are totally capable of carrying the franchise in to the future, which is a relief. Oscar Isaac, who has made his name as an excellent character actor whose performances always carry a certain gravitas, also excels in a role quite different to any of his others and is a welcome addition to the cast.

Of course we also get to see a few familiar faces over the course of the film. Carrie Fisher and Harrison Ford make returns as Leia and Han Solo, the former having ditched the princess moniker in favour of General, the latter having regressed back to smuggling after some problems in his personal life (to keep it as vague as possible for you). They’re both welcome sights, though this is where the film unfortunately starts to unravel. As nice as it is to see these characters again, and I shouldn’t forget to mention Chewbacca too, Abrams and the writing team seem devoid of new ideas as to quite what to do with them, both of their most interesting scenes come when they’re in conversation with the new cast and Fisher in particular feels underused, though perhaps that will be resolved in episodes to come.

Adam Driver’s Kylo Ren is an interesting but ultimately underwhelming villain who does have some engaging character traits and even that sense of magnitude that Darth Vader so brilliantly encapsulated in the original trilogy, but ultimately falls foul of the film’s reluctance to branch out. Andy Serkis’ sinister Supreme Leader Snoke does look like an interesting character though, and one we will hopefully delve in to further with future episodes.

This sense of recycling old ideas and using them in almost the exact same way may feel like a loving tribute at first, but it soon becomes clear that it intends on almost mirroring scenes exactly, to the point where you’re recalling its correspondent scene and wondering if anyone in this galaxy far, far away learned any lessons at all from the previous ordeals, or if everything is simply destined to repeat itself ad infinitum for centuries in to the future. One particular beef I have is that the Dark Side insists on making giant spherical objects from which to plan its nefarious deeds.  Some variety at least would be nice, rectangular prisms don’t get enough love.

‘The Force Awakens’ is as visually striking as any of the best Star Wars films and there’s plenty to be excited about going forward, but it didn’t quite do enough on its own to be anything more than passably fun. It’s definitely the Star Wars film with the best sense of humour, effective jokes and physical gags coming thick and fast, breaking up the tension well and showing Lucas that you don’t need Jar-Jar Binks, the equivalent of cinematic cancer, to try and make the audience laugh, but it doesn’t quite contain enough substance to back up the humour and make something truly great. As far as stepping stones to greater things go though, it’s not a bad start, and as long as we can avoid continuing to mirror things from the past we may be able to break new ground in the future. For this one though, it’s more ‘The Force Rehashes’ than ‘The Force Awakens’.