This is an absolutely fantastic game, equal parts beautiful, aesthetically breathtaking, and full to the brim with monstrous, bloodthirsty creatures. 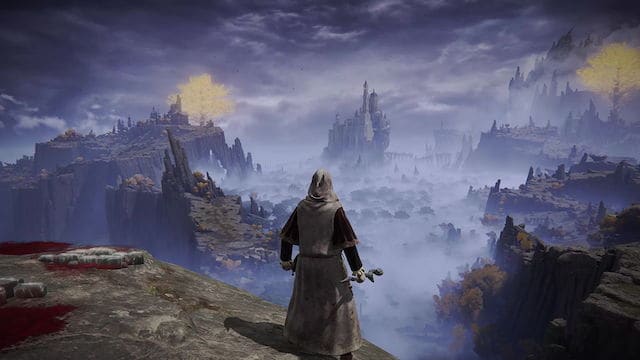 What else is to be expected from the Fromsoftware studio, this game follows in the footsteps of the Dark Souls series, Bloodborne and Sekiro, instead this time round, the bosses are scattered across a ridiculously huge map. The usual dark souls delivery of having the lore hidden within the world itself, be it weapon descriptions, quirky characters or giant piles of corpses is ever present. Although Elden Ring does offer slightly more guidance than the previous entries and as much as I adore this game, it may not be for everyone. It does feel more approachable but it is still a challenging game, unique monsters with insane attack patterns, lethal traps and other players are just some of the things that can and will kill you.

Some of the classic dark souls-style dungeons you can discover are pretty unforgiving (Hero’s Grave, I’m looking at you) and sometimes it might feel like you’re just throwing yourself at an unwinnable and unfair fight. However Elden Ring brings a new array of tools and mechanics to help you beat or burn down any of the hundreds and hundreds of monsters scattered throughout the Lands Between. 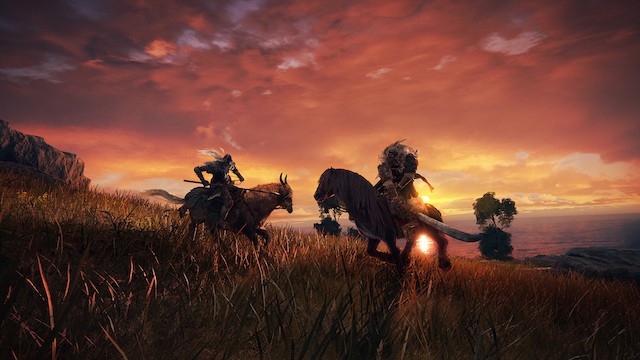 You can change how your weapons work as well as the skills they have to better suit your play style. Summonable Ashes, spirits you can call forth to aid you in combat, are incredibly useful. I found that my haggard group of wolves made a decent enough distraction to allow me to carve hunks out of dragons and skeletons alike.

The new crafting system, as well as the littering of materials spread across the land, seems to be a decent addition, bones, flowers, golden turds, it’s all there. However admittedly, I haven’t crafted too many items during my play through as the amount of rewards and items you get seem to be pretty generous.

The world is huge, and I mean huge and what better way to explore this new terrifying land, than with a new mount and new mounted combat. Torrent, our horned horse companion, is pretty effective at navigating the lands with his dash and double jump. I found him especially proficient at putting distance between myself and the giant rat-dragon firing a laser beam at me from three fields over- while I built up the courage to have another crack at trying to chop off its tail. But even with all of these tools at your disposal, it is still a pretty difficult game.

Dark Souls fans will not feel out of place either, discovering Grace sites, acting as respawn and travel locations. Gathering runes to level up and become even stronger, even the menus look identical. It still feels familiar but the new sense of freedom is a welcome mix-up. Being dropped

at the base of a great expanse, castles and destroyed monuments in the distance, ruined villages and churches, even some scattered monsters and mounted knights. And then being cut loose to explore and discover, ultimately creating your own, unique experience of what this incredible game has to offer.