So, it’s here. Batman: Arkham Knight – the final instalment in the ongoing Batman: Arkham series of video games. The Arkham series (2013’s lukewarmly-received Arkham Origins aside) has not only set new standards for games based on comic books, but also the medium in general. No pressure then – but with the franchise’s original developer Rocksteady back at the helm, we should be in for a good time, right? 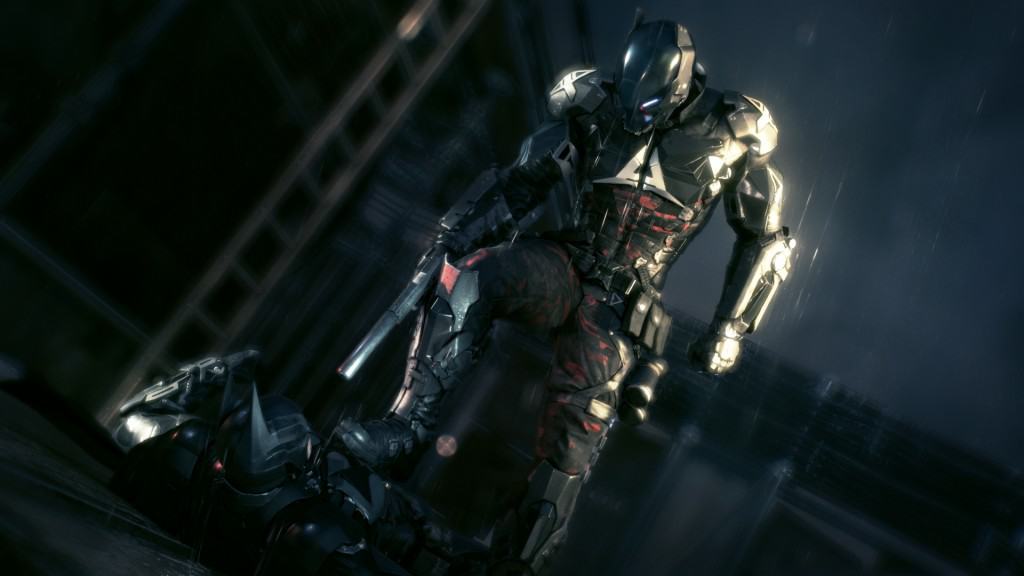 The plot picks up nine months after the events of Batman: Arkham City. Crime levels in Gotham City have fallen to an all time low, so everything is fine and dandy. Of course, nothing in Gotham lasts forever (except the ever-present rain, apparently), and the peace is broken when Scarecrow tests a particularly nasty strain of his fear toxin on the patrons of a local diner before threatening to unleash it across the entire city. One mass evacuation later, and the only people left in Gotham are the dregs of the city’s underworld and a highly organised, well equipped militia led by a mysterious new nemesis, the Arkham Knight. 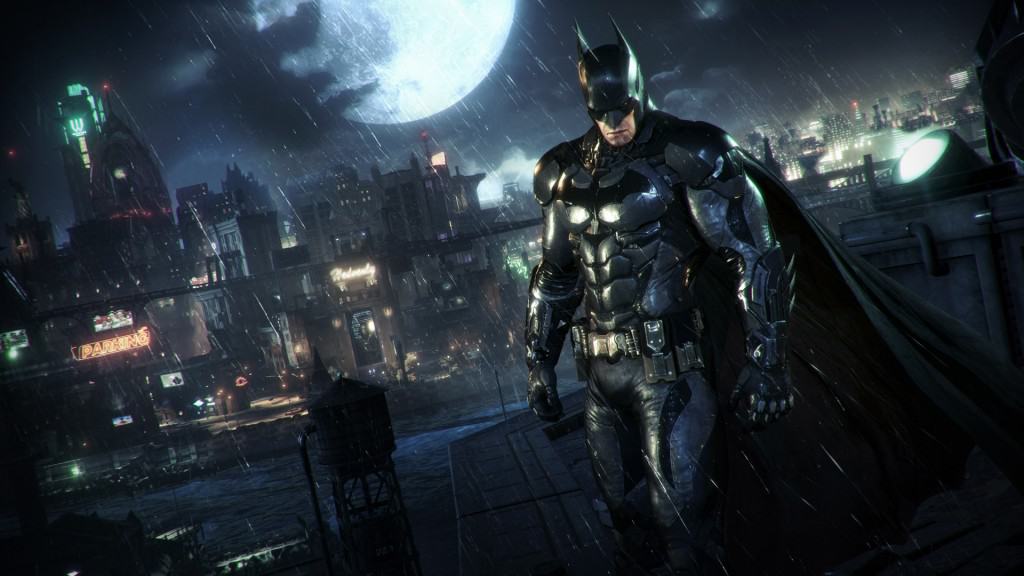 Fortunately, Batman has brought along something to even the odds – the Batmobile. But while it’s undeniably cool to get your hand’s on the Bat’s wheels for the first time in the Arkham series, the Batmobile does threaten to dominate proceedings at times. With the whole city at your disposal, it makes sense to have the Batmobile to get around in, but here’s a quick checklist of other things you’ll use it for – high-speed chases, timed race challenges, puzzle-solving, platforming, stealth sections… and tank battles. Yes, you heard that last one, right – at the push of a button, the Batmobile can transform into a freaking tank. Lore purists may splutter, but to me it didn’t seem *too* ridiculous – aside from the whole ‘Batman doesn’t kill anyone’ thing, which is hand-waved by the fact that all the enemy tanks conveniently happen to be unmanned drones. Admittedly that still doesn’t account for some of the Bat’s more bone-breakingly brutal takedowns, never mind the numerous mooks who’ll be shot (with non-lethal bullets?), run over, involved in car crashes or electrocuted during the course of the game – it’s almost hilariously at odds with Batman’s whole schtick, but perhaps it’s best not to get too worked up about it, eh?

Mechanically, the tank battles are roughly analogous to Batman’s on-foot fighting style – enemy attacks are heavily telegraphed, and your job is to dodge and retaliate. It’s solid and reasonably fun, but like a lot of the Batmobile-based additions to the game, your mileage (sorry) may vary. Personally, I had a lot of fun chasing enemy APCs down and taking them off the road with an apparently non-lethal rocket launcher, but found that the Riddler’s racetrack-come-puzzle-solving sections ranged wildly in quality from “oh, this is interesting” to “this is an utterly miserable experience.” At least those are optional though – the tank-based stealth sections (as oxymoronic as they might sound) are part of the main storyline, and will definitely rub some people up the wrong way. I didn’t have a problem with them personally, but they weren’t a particular highlight of the game either. 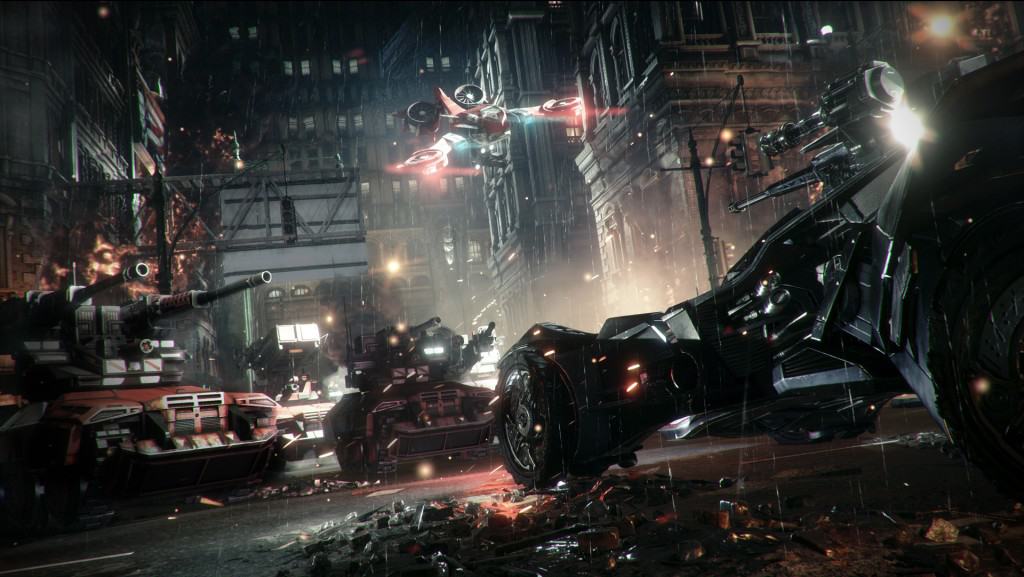 Indeed, it’s telling that Arkham Knight’s most compelling moments still come from the core ideas that were first established back in Arkham Asylum – the free-flowing combat and the more stealth-based predator sections. The former satisfies with its slick animations and visceral feel – series veterans should have no problem getting back into the groove, but newcomers shouldn’t be overwhelmed thanks to the gradual introduction of new moves and enemy types. It can be a little frustrating trying to pull off the correct attack to take down a particular opponent in a crowd, but when you get into the groove and are effortlessly taking out a horde of bad guys, it’s immensely satisfying – thanks in no small part to the powerful thuds and crunches you hear as your attacks connect. Special mention should go to the sections where you team up with one of Batman’s allies for a brawl – as well as being able to perform special team takedowns, you can freely switch to the other character, which keeps things feeling fresh. The predator sections are even more enjoyable when you get them right – sabotaging equipment and setting up traps using gadgets old and new, striking from the rooftops or underneath the floor, then getting out before the enemy knows what hit them. There’s even a neat new multi-takedown move which allows you take out a bunch of armed guards in one fell swoop – though getting the prompt to activate it can be a little finicky at times. Still, if it all goes tits-up, you can always try to fight your way out of most situations – just remember that even Batman can only take so many bullets.

Story-wise, while tracking down Scarecrow and revealing the Arkham Knight’s identity are the main priorities, side-missions see some of Batman’s most famous nemeses (as well as some more obscure ones) take centre stage. The main plot has its fair share of foreshadowing and at least a small dose of deus ex machina, but it’s an enjoyable ride nonetheless – and without wanting to spoil anything, the Joker still makes his presence clearly felt despite his fate at the end of Arkham City. In fact, I’d go so far as to say that he underpins the strongest plot device in the game (which again, I won’t spoil), thanks in no small part to Mark Hamill’s standout vocal performance. Once you’re done with the main story, there’s still work to do, as the credits won’t roll until you’ve apprehended the majority of Gotham’s most wanted and triggered the final, game-ending event – and even then, the true conclusion won’t be revealed until you’ve completed all the game’s sub-plots and locked up all the villains. Yes, that means you have to collect all of the Riddler’s trophies – goddammit, Riddler.

It also goes without saying that the game looks absolutely gorgeous (in a dark and gritty sort of way), from the flowing animations during combat to the views across Gotham’s neon-lit, rain-drenched skyline. It’s easy to take this sort of visual fidelity for granted in the new console generation, but Arkham Knight looks and feels like it’s pushing the PS4 to its limits. Sadly, I hear that the same can’t be said for the now-recalled PC version, which WB Interactive are now working to fix.

Overall, Batman: Arkham Knight is a worthy way for Rocksteady to bow out from the Batman franchise. While the Batmobile threatens to hog the limelight and will probably annoy a lot of people one way or another, the fundamentals of the game are as solid as ever. Whether you’re engaging in a fistfight with a horde of thugs, stalking militia from the rooftops, playing detective to solve puzzles and seek out sidequests, or simply gliding across the beautifully-realised Gotham cityscape, Rocksteady cements the fact that they really know how to make you feel like you are the Batman.