It’s just over a week since WWE ’13 got unleashed into our universe, and it’s taken this writer a week to sit down and type the review. It’s been played in the Soundspheremag HQ PS3 a lot. We really dig this game, as wrestling fans. We’ve obsessed over it, in fact! Graphically, it’s pretty much the same as WWE ’12, but conceptually this game is a proper beast – it’s a whole new level of gaming goodness. In the well-circulated promo videos for this title, there’s a lot of talk about revolution, and CM Punk is leading it, at the core of the WWE’s new breed. Thing is, WWE ’13 is at its best when it looks to the past – more specifically, the Attitude Era. Many longtime fans will say that wrestling ain’t what it used to be…this game is for them. 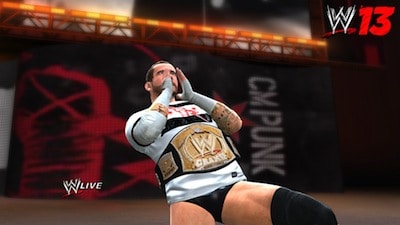 In terms of the interactive gameplay, overall, the quick grapples and attacks remain from WWE ’12; it’s certainly worth noting that the reversal opportunities are varied and keep things interesting as well – the pace keeps that all-important drama there. The Breaking Point submission grapples are intense to perform, as are the pins to the mat – it’s all about the button-mashing and timing things right in order to get the job done.

Another interesting (and thoroughly thoughtful) addition from those clever guys at the helm (THQ), is that you can now set the Experience level. Experience changes the amount of damage required to score a pin or a submission, and of course, this really makes the difference between a simple “squash” battle on the classic Raw Is War, and a Wrestlemania or PPV-style epic encounter.

Another aspect that helps the drama-side of things is the incorporation of the OMG moments – this is, of course, a really stupid name, but it is a direct  reference to Jim Ross’ epic shouting at standout moments during the Attitude Era (and ever since, to be fair). The way this works is rather simple – you charge up your momentum high enough (for a finisher) and place your opponent in one of several specific areas (like being on a table, on top of the cage, or against a barrier). The only major issue with this excellent little feature is that the OMG parts are limited to a handful of specific spaces, something developer Yuke’s would do well to expand on in the next WWE game release.

Moving forward, of course, we have the drastic change in modes from WWE ’12 – the popular Road To Wrestlemania has been replaced with Attitude Era mode. This is basically, a delightful trip through some of the coolest and most innovative moments in wrestling history, the different campaigns take you through highlights from WWE (the audio in the cut scenes is lifted directly from the original footage with the WWF references annoyingly cut out from the dialogue) that goes covers 1997 to 1999. As expected, you play as all the defining stars – Stone Cold Steve Austin, The Rock, Mankind, and more (you can unlock the likes of X-Pac and Ken Shamrock during the whole process – it’s so darn nostalgic) during some of their biggest matches, all supported by a wealthy collection of archival video footage breaks. It’ll be interesting to see if they move back to the RTM mode on the next games – we miss that, and as good as this is, we don’t honestly think that a strong reliance on the Attitude Era can be repeated again.

In slightly more detail now story-wise, DX, Stone Cold, The Rock, the Brothers of Destruction, and Mankind all have their own chapter sections, which lead into a culmination in the weeks leading up to Wrestlemania XV. Each match you play represents a significant historical moment for that superstar. For example, do you remember when Hunter Hearst Helmsley first teamed up with Shawn Michaels on RAW in 1997 to form DX? Or when Mankind won the WWE title for the first time by beating The Rock (with a lil’ help from Stone cOLD)? Even if you don’t, the story mode does a brilliant job of setting up each match and the storyline that went with it. It’s simultaneously educational and entertaining stuff.

While it’s true that certain fans will doubtless have an issue with the removal of Road To Wrestlemania this time around (perhaps it could have been included alongside the Attitude Era mode?), followers of WWE history will certainly embrace it. Thanks to the inclusion of so many superstars from the era (WWE 13 has the biggest roster in WWE gaming history), the mode provides the ultimate in nostalgia for retro fans. While it is quite frankly awesome, not all moments are perfectly recreated though: stars like Chyna, The Hardys, The Dudleys and Kurt Angle (understood though, because the latter few are under contract through TNA) are missing out, and that’s a damn shame. It’s important to take a sec to note that younger wrestling fans will still have a massive selection of current stars to choose from (Cena, Punk, Undertaker and more…) and settings to enjoy.

A real positive is that this year’s game introduces historical objectives that are both optional and mandatory – these unlock new superstars, costumes and bonus matches Most times, the mandatory ones simply involve winning a match a certain way, but other objectives can be far more specific. In the legendary Hell In A Cell match between Undertaker and Mankind, you are set up ahead of time to relive that match’s most brutal moments. You will throw Mankind off the top of that cage, through the announce table, and down to the ring. These are very specific moments where the game will split away to a pre-rendered scene. It’s all so real – and wait until you play out the “Montreal Screwjob” and have Bret Hart spit in Vince McMahon’s face – epic stuff. There’s a lot of work involved going through all the bonus historical objectives (which are required to get most of the unlockables), but honestly, after reflection, it is all so worth it.

One major gripe is that certain era-relevant superstars (aside from the aforementioned), like Al Snow, Hardcore Holly, and Steve Blackman aren’t around. We think it would have been better if the developers THQ had cleared some spots currently held by era-specific versions of superstars already in the game. Honestly, who the heck needs more than one version of The Rock and Triple H, really?

DLC is also (surprisingly) worth mentioning. The main roster itself is very up-to-date, and as a result of the downloadable stuff there are some recent additions like Damien Sandow, Antonio Cesaro, AJ Lee, and Ryback that are available alongside Attitude Era favourites like Val Venis, Rikishi and yes, even Gangrel…(he has the) best entrance ever.

Universe mode is pretty much as it’s always been, albeit with a few more tweaks in its randomly generated storylines to give players more control over what happens from week-to-week. Once all the content is available (Godfather, Lita, Edge and others are ready to go following the completion of the Attitude Era mode and unlocking of Off Script and a few more time-specific matches), it’s great to have potential dream matches like Ken Shamrock versus CM Punk or Godfather versus….Brodus Clay. Yeah, we played that one. It was good.

WWE ’13 remembers when wrestling was truly great. It remembers the entertaining silly moments (check the video cutscene where Mankind introduces Socko to Vinnie Mac – classic!) and the death-defying stunts (most, as expected, involve Mick Foley) that made wrestling so damn popular and took WWE/F above WCW in the all-important ratings war that the game’s central mode focuses on. Modern fans will still get the wrestlers and features they’ve grown accustomed to, while also getting a taste of what wrestling’s past is all about.