Gorillaz headlined the All Points East festival in London’s Victoria Park on Friday 19th August and it was a fantastic show full of classic Gorillaz collaborations and crowd pleasing tunes.

The show immediately got off to a huge start with a pre-recorded tease of the new album titled ‘The Static Channel’ and then into ‘M1 A1’ from the self-titled debut album. The set moving forward was very heavy on material from 2010’s universally acclaimed ‘Plastic Beach’, which I do personally, believe to be Gorillaz’ finest album to date. 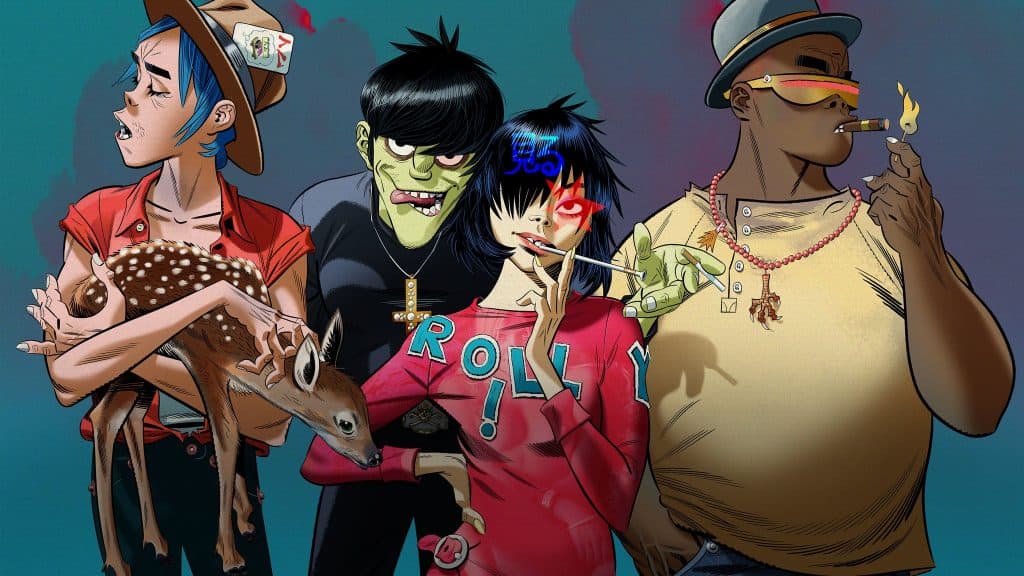 Frontman Damon Albarn made many references to this being a homecoming gig of sorts, as he’s London born and raised and this only made the local crowd scream with applause. As usual, Damon was very interactive with the crowd, at one point even being given and wearing some sort of novelty monkey hat during the performance of ‘O Green World’.

He then went on to wear another crowd-given article of clothing, a blue wig seemingly to draw parallels with 2-D, the cartoon lead singer and somewhat ‘’alter ego’’ of Damon himself. Halfway through the set saw the world premiere of an entirely new song, ‘’New Gold’’ featuring Tame Impala with additional vocals by Bootie Brown. This song is believed to be on the track list for the upcoming album, ‘The Static Channel’ where debut single ‘Cracker Island’ was also played earlier on in the set.

While the crowd’s energy never faltered, it hit new levels when Happy Mondays frontman Shaun Ryder, and Gorillaz longtime vocalist Rowetta appeared on stage to perform the classic ‘DARE’ from 2005’s ‘Demon Days’ album, this was followed by ’Momentary Bliss’ from 2020’s ‘Song Machine, Season One: Strange Timez’ and then Damon wished everyone a good night while the crowd started deafening chants of ‘’one more song!’’ which comically turned into ‘’five more songs!’’.

The encore started with Damon introducing bass legend from 70’s punk band The Clash and longtime collaborator Paul Simonon onto the stage for the song ‘Plastic Beach’. Unfortunately he wasn’t joined by Mick Jones like he was on the 2010 tour but nonetheless it was a fantastic way to kick off the encore which concluded with ‘Feel Good Inc.’ featuring De La Soul and ‘Clint Eastwood’ with additional vocals by Sweetie Irie.

This was the final show of the second European leg of Gorillaz’ 2022 World Tour, and it definitely felt like a homecoming celebration. Biggest highlight of the set for me was a fantastic performance of my personal favorite Gorillaz song: ‘On Melancholy Hill’. Other highlights included ‘Stylo’, ‘DARE’, ‘Empire Ants’, ‘Plastic Beach’ and ‘19-2000’. Damon Albarn is truly one of the greatest minds in music today, and I can’t wait to hear his next work with Gorillaz, especially when he performs it live.