What year is this? What year is this?? It’s hard to tell and for good reasons. I’m gonna be brave and say its Year Zero. During lockdown my studio guy told me this Covid malarky would be like the meteor strike, wiping away all the dinosaurs. I disagreed. I also liked dinosaurs.

But he wasn’t wrong. The world has changed. Bands, scenes and niche cultures have all seen a wiping away of everything that was before. Many have tried to get it back, but this time it’s different. People and punters are different. They want something different. They want to feel again. And guess what? That’s where Ben and Jon of Petrol Bastard have stepped in.

I’m not saying they are the meteor strike, but they are probably the resultant tidal wave here to sweep a whole load of dead fish away. Good riddance.

For those that don’t know Petrol Bastard. They were a deliberate awful ‘act’, a Tesco-value Prodigy in their own words. Although well produced, it felt like a form of self-loathing and trying to get the jokes in against themselves before anyone else did and a parody of some of the detritus we always try to avoid at gigs and raves.

It was brilliantly funny, car-crash techno that made us feel wonderfully uncomfortable. But it was a joke that started to wear thin, even for themselves. They had made their point but started attracting people who were just quite frankly, sketchy as fuck and that was it. They broke up (or was that part of the joke too?). Game over.

And this time it’s not funny. What I mean is that they are VERY humorous, but this time it isn’t a joke. Somehow they have become one of the most important acts in the UK and a potential epicentre for change. They are no laughing matter while still making your sides ache laughing.

They have launched themselves fully into gigs again and with an inner circle of like minded pals (Petrol Hoers, Hot Pink Sewage, The Ducks, Analogue Blood etc). They have done a UK tour, and it’s been brilliant. I’m going to call this crew the wider Petrol Scene, as all the bands on the tour have a lot on common.

I was able to catch them on three days, Blackpool, Manchester and Hull.

The feel to this is like something you only read about in music history books and few people understand the significance of these events until it’s all been and gone. This time round Petrol Bastard seem to have created the punk spirit of 1976. Yup, that’s quite a claim to make, and I will die on that hill.

In late 1976 the Sex pistols did their Bill Grundy interview while pissed. The world blew up for them with the controversy. After that, punk pulled in huge crowds, mostly of violence-seeking yobs, thugs and people who didn’t know what the original scene was like. I’d argue that the Grundy interview killed what punk was.

What punk was in 1976 is exactly where Petrol Bastard and chums are right now, just before it all kicked off.

In ‘76 the punk scene was mostly utter geeks, nerds, kinksters, queers and people that didn’t really feel at home in any other music scene. They rejected the dinosaurs and wanted something of their own. Nobody gave a fuck what bands you were into, it was all about now. It was year zero for them.

The original punk was still very street, very working class, while still being niche and feeling like family with like-minded oddballs across the country.

All the acts that performed with Petrol Bastard kept it minimal, none of that being a ‘proper’ musician bullshit. All of them put on a show. The 100 Club in London put on their first punk festival waaay back. It was all about putting on a show instead of being a ‘proper’ band.

My prime example is Siouxsie Sioux, performing with a young and then still nerdy Sid Vicious on drums doing an improv version of The Lords Prayer. It was (probably) shit, out of time woefully lacking in any musical skills, but it captured a vibe of ‘fuck everything before, this is us and its now’.

This is where Petrol Bastard are right now.

It’s exactly that atmosphere that Petrol Bastard brought to each gig and lit up the room like Peer hat in Manchester. Armed with just their wit and an ipod/iphone they played to a sold-out claustrophobic crowd. The heat and energy was off the wall, to a point I had to take a breather.

Just like the original punk gigs (Sex Pistols summer ‘76 in Manchester anyone?) folk found themselves at a strange gig. Some had never heard of them before and had wondered in. Seeing the sight and energy of Ben and Jon at full-throttle, the accidental punters just dived into it, moshed like fuck and looked like life-long super fans. They weren’t. This was the effect it had on them.

I was able to speak to those punters about it. It was life changing for them. It was here that it dawned on me about the 1976 atmosphere. I travelled to see them in Hull too, checking to see if I still believed this outside of the excitement of the Manchester gig. Yup, as soon as the awesome Rave Machete kicked in the gig at The Adelphi, I was even more convinced this was a ’76 vibe.

No one gave a fuck what bands you were into before all this, it doesn’t matter anymore. It was chaos, it was people dancing, probably making up new styles of dancing. It was folk making their own clothing, being expressive. At the Manchester gig we even got a ‘76 style Britannica, dressed up with home made Union Jack shield and a crown of beer cans (cheers to The Ducks). The ’76 punks like Jordan (cat woman) and the Bromley contingent would have been very proud.

This was the same vibe at the Blackpool gig (at the wonderful Horror Café) with a missing PA system and where no one gave a shit. I got to see some of the best things at that gig, including a headbanging stripping nun fall over, smash her head on the floor and just get up and carry on. Or as the curtains on the windows fell open, the shocked faces on pensioners outside the venue going for a pleasant evening stroll and seeing the horrors from within of Petrol Bastard doing a dance-off routine in sparkly short-shorts and hilarious cartoonish sound effects (“KLAAAAANG!”).  Or one of Hot Pink’s clowns running outside and chasing innocent pedestrians down the street, with the resultant screams being audible from inside the venue

Its kid’s stuff in the style of Animaniacs and long gone slap-stick comedies. Far too innocent and wholesome for its own good.

The original punks were quite innocent and social commentators record how those geeks used to be more about sharing bags of sweets instead of drugs, with the odd exception. That’s very much how this feels now. Sharing a bag of ear defenders with Petrol Hoers from backstage sums up very much what their scene is like now. It’s a safe environment without any macho, lager-lout posturing. It’s inclusive, and it is healthy. No one here wants the old ways anymore.

What’s next for Petrol Bastard and the Petrol Scene is up for debate. History shows their trajectory could also mirror the original punks – something controversial happens (the Grundy Interview) propels them to be a focal point of a zeitgeist they were trying to stay clear of. I’d like to say the current Petrol Scene is too nice, sweet and wholesome to let that happen. Petrol Bastard did all the fucking up in their early days, but that will be our secret.

Whatever it is that Petrol Bastard have now, they somehow have recreated the 1976 vibe by probably being oblivious or not giving a fuck at all about music history. Which is about as punk rock as you can get.

Go and see them on their next tour. You’ll either die laughing or bust a rib on the dancefloor.

All dinosaurs are dead. 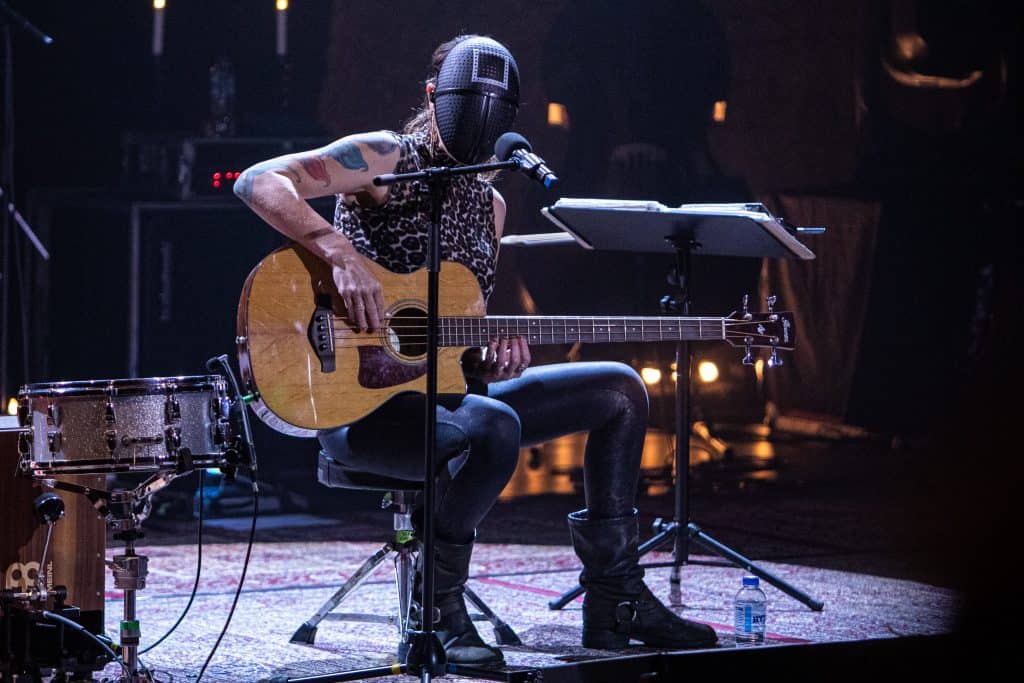