The audience In Manchester tonight seem to simply be in awe at the fact they are hours away from seeing Pixies. Their Cobain-approved brand of fiery pop rock has rarely been played on this side of the Atlantic, meaning that everyone is sure that they’ve signed up for a dazzling spectacle. 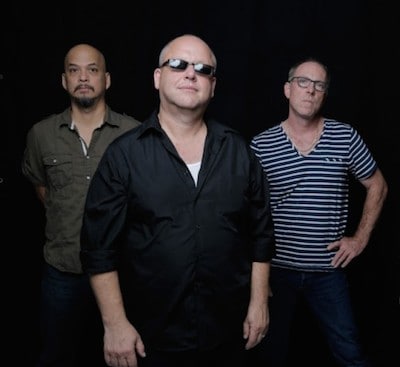 The night is set into motion by Arctic Monkey’s prodigal sons Royal Blood. Crushing drum beats combined with mesmerising pedal work marry to make a brooding behemoth of a sound, which demands attention. By the time they reach set closer ‘Out Of The Black’, the Brighton duo have captured Manchester.

They’re succeeded by northern tearaways Maximo Park. The set is peppered with hits but plagued by technical difficulties, and their catchy serenades fall upon unimpressed and frankly bored ears. Even during the blitz of ‘Our Velocity’, they look like a band out of their depth. But everyone is here for Pixies, and they’re not a band known to disappoint. They open with the visceral and bouncing ‘U-Mass’ before sweeping into the magical bass line that christens the classic Debaser. Even without mercurial bassist Kim Deal, the band still seem as strong as ever as the woozing sway of ‘Hey’ rings out in the Lancashire sun. Darting onto to new material, it goes down a treat. The lead single from their new album has received mixed reviews; but the hypnotic power of ‘Indie Cindy’ can’t be disputed, and the crowd are treated to a beautiful breathing spell. They risk not playing their crowning glory ‘Where Is My Mind?’ as their set closer, but it still unites and ignites the crowd. They finish on the admirably merciless drone of ‘Vamos’, channelling their youth and bringing the night to a sensational end with a grunge-indebted feedback heavy guitar solo. Incredible.