Heavyweights of the British metal scene Raging Speedhorn are back this year with a phenomenal full length album, the aptly named ‘Lost Ritual’. It’s been nearly a decade since their last release, 2007’s aquatic-themed hardcore masterpiece ‘Before The Sea Was Built’. In that same year, the band announced they would be splitting for good. Their return is as triumphant as it is brutal, though perhaps more organised than previous releases. However, we are sure that ‘Lost Ritual’ is set to be a crowning glory for metal in 2016. 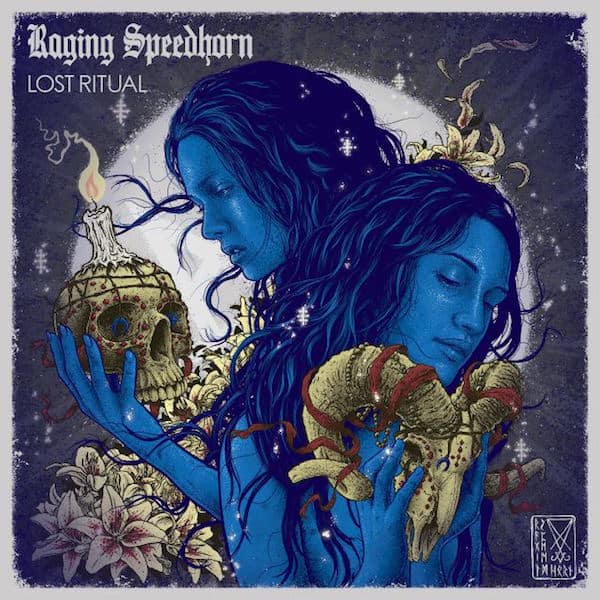 First track ‘Bring Out Your Dead’ is the musical equivalent of a punch to the gut. You can clearly hear the death metal influence. Combined with a killer riff and soul piercing twin vocals reminiscent of early material, this is a fantastic start to the album and sure to get your blood boiling.

Second track Halfway To Hell’ is viscous, in your face, and as groovy as metal can get. Along with next track “Motorhead”, you can tell that Lemmy has been a huge musical influence on this record. Although neither are about Motorhead the band, the evidence is clear in the structure of these great tracks. Both songs boast bodacious bass-lines and huge amounts of swagger. The break down in the middle of ‘Halfway to Hell’ is especially impressive, showing off exactly how much force this six piece can create. These are songs that will make you want to swig whisky and drive at 100mph down an open highway (although of course we don’t condone either).

Things slow down and get more sludgy with ‘Evil or Mental’; lyrics about hedonistic good times are replaced with screams spitting pure hatred about the false conceptions of a misguided society. Things get even more sludgy, even crossing over into Doom Metal territory, with ‘Ten Of Swords’ and ‘The Hangman’. This change of pace is what makes this album something special; from punchy and violent to claustrophobic and event haunting, the music and lyrics of these songs take a truly threatening turn.

‘Dogshit Blues’ gets the energy pumping again, blasting out of the enclosed space created by the last track. The use of screaming and melodic chorus works really well and turns this song into a certified rock n roll anthem. Another killer breakdown in the middle of this song will tease you and leave you wondering where everything is leading to, something that Raging Speedhorn is great at doing. ‘Shit Outta Luck’ is a similarly rocking song, with a fantastically funky breakdown, a great riff and frantic high pitched screaming. This one will stay in your head for a while.

The final two tracks introduce a more stoner rock feel, slower and with a bluesy element. Still, the lyrical content is just as dark as ‘Evil or Mental’, if not more so.

Overall, this is a fantastic comeback for the band. Their form may have matured slightly, but all that original rage and power reigns true. In light of so many musical talents disappearing this year, treat yourself to a record that pays homage to British Metal and Lemmy in all his glory, in today’s heavier and more outwardly savage style.