So, AFI pretty much blew us away this evening with a mix of blistering alternative rock instrumentation, delicate harmonies and blood-boiling screams – you really should’ve been in Nottingham…really. 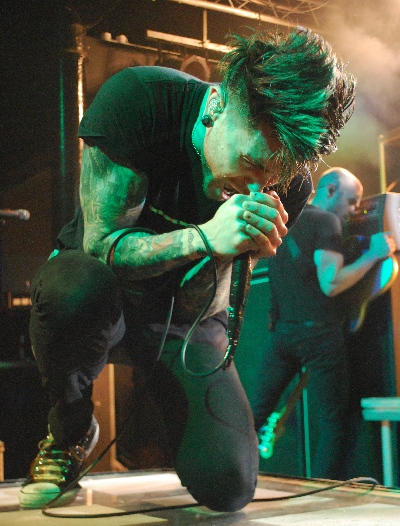 In our opinion the most interesting thing about AFI is their evolution from New York hardcore music somethings to decadent, dark pop-punk masters. It’s nice to see that their wide range of influences are evident within the bands supporting – Dear And Departed start off with their soft Cure-esque tones, accessible beats and slight keyboard touches that recall the best parts of Alkaline Trio. A Matter Of Time‘ stands out during this set as a strong, upbeat and almost anthemic track – we expect these guys to be doing some headlining tours next time they come back. D&D offer up a suprisingly poppy but welcome start tonight.

Meanwhile, Sick Of It All are the complete opposite with their balls-out, relentless hardcore sounds. These guys are arguably the defining band of the NYC hardcore scene and their influence can be seen the world over – the problem for us is that it all sounds the same from one song to the next. There are some real gems in this set including the defiant and proud ‘Take The Night Off‘ which features some awesome riffage and an ultimate sing-a-long chorus, other ear-splitting, pit-starting tunes include the instantly recognisable ‘Scratch The Surface’ and the aggressive powerhouse ‘Call To Arms‘. Throughout, the band work hard to entertain and unite the diverse crowd, and to their credit they do the job well, but for us the band lacks the creativity and depth of the headliners – then again, respect is due, when they have made a career (spanning some twenty-plus years) and played all the legendary punk venues the world has ever offered to thousands of sweaty people, we imagine that they just don’t give a f***. 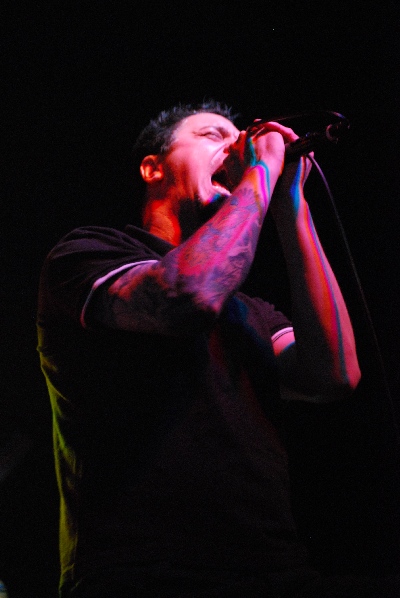 AFI are a complicated band, as people they share a lot in common with their music. The members seem quiet and reserved one minute (off-stage) but the next, once it is showtime each member is a whirling (literally!) dirvish of energy, vibrance and soul. From start-to-finish A Fire Inside twirl, mosh, jump, scream and dance to the delight of Rock City – we’d never seen them before within a raw live environment and if you’ve heard good things, then we swear that the performance is worth the hype.

From new material like the pop-tastic ‘Beautiful Thieves‘ and the pounding, party beats of ‘Too Shy To Scream‘ via the dark and desperate tones of ‘The Leaving Song Pt.II‘ alongside our grand standout of the evening ‘Death Of Seasons‘ (which sees vocalist Davey Havok writhing around on the stage floor seemingly dragged under the command of his music while the band fly about around him), the four-piece seem to bring their absolute best tonight. We didn’t know what to expect but we were most impressed by the energy, emotion and grit that carried an apparently jet-lagged band through tonight. Closing with arguably their most accessible tracks ‘Miss Murder‘ and ‘Love Like Winter‘ before a resounding rendition of the defining ‘Silver And Cold‘, and after a heart-felt final bow, the band will move on in their tour, but we’re confident that we’ve seen something special this evening in Nottingham. 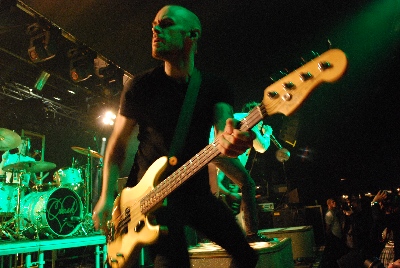 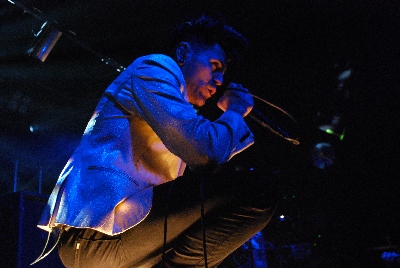 Watch the video for ‘Beautiful Thieves‘ below: