The trouble with being a Pink Floyd fan is that upon encountering another fan, it is often common to disagree on the band’s best work. Someone may prefer the fated Syd Barrett days of 60s psychedelica in ‘Piper At The Gates of Dawn’, another may swear by the ‘Dark Side Of The Moon’/’Wish You Were Here’ years where Pink Floyd were perhaps at their most settled creatively and personally as a band. Indeed, you are likely to encounter a fan that’s rather fond of a concept album born out of Roger Waters’ tyrannical artistic tight-grip, resulting in the rock opera ‘The Wall’. Pink Floyd’s varied discography means a die-hard fan is always more than prepared to debate the evolution of the band. 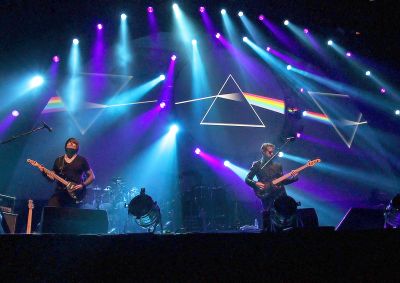 And so, upon establishing a tribute to such a band, one may be fooled into expecting slight favouritism for maybe just one or two aspects of Pink Floyd’s multi-faceted career. But in York’s Barbican, Brit Floyd produce a set-list that pays the deserved homage to almost every Floyd album, every line-up change and musical direction. From a stonking full-length (and by full-length, we mean a whole 20-minute) version of ‘Echoes’ to a expertly funky attitude-filled rendition of ‘Money’, finishing off with a brash encore performance of ‘Run Like Hell’ complete with bass player and singer Ian Cattell in biker shades and leather trench coat- just one of the more theatrical moments of the set which the band ardently attempt to recreate.

Brit Floyd excel in their visuals and in recreating the stories and concepts that often came hand in hand with the many songs which provide a core narrative to Pink Floyd’s albums. A touching performance of ‘Mother’ is granted added poignancy by the replacement of Gilmour’s traditional “mother” voice in the chorus in the original recording with backing vocalist Jacquie Williams and was just one of the many highlights of the show. The inclusion of ‘High Hopes’ from Pink Floyd’s final album (and the only one without Roger Waters) ‘The Division Bell’ is an atmospheric ballad and a choice song to remind fans that the Floyd still had it, even into the early nineties. A downer, if any, is the omission of a performance of ‘Great Gig In The Sky’ which would be a fantastic showcase of the backing vocalist’s talents and is briefly missed. However, flawless saxophone from Rob Stringer and shattering guitar from Bobby Harrison makes it abundantly clear that Brit Floyd has acquired the best and most accomplished musicians from around the world to truly recreate the Pink Floyd sound.

All in all, it’s staggering to contemplate that it was only in January 2011 that they performed their first ever live show at Liverpool Echo Arena, a venue they will return to this month along with London’s O2 Arena and an extensive world tour that continues into 2012. Brit Floyd are a must-see for any Pink Floyd fan or casual listener. Whether you were one of those lucky enough to have seen Pink Floyd live the first time round (it was said to have been a mere £10 to see them at Earls Court), or have always longed to experience the magic of the musical pioneers live, Brit Floyd confidently catapult that enduring sound aloft and soaring into the stratosphere.

Shine on you crazy diamonds….