Ah, Sunday, the final day of Download Festival 2018. The final day at a festival is always a funny kind of day. You still have one whole day of awesome bands to look forward to but you can almost taste the post festival blues already. With ‘Paradise City’ still ringing in our ears from last night we push past the thought of returning to normality and get ready for one final day at Donnington Park. 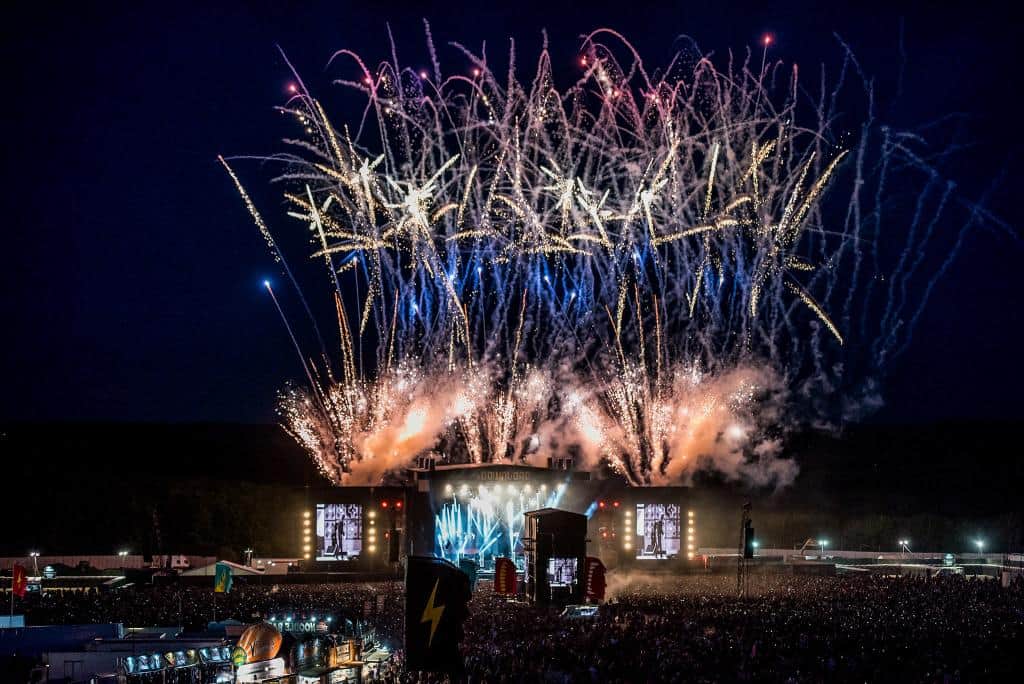 To start today’s proceedings we head to the Dogtooth stage, which this year has been one of my favourite stages featuring a stellar line up, to check out one of Yorkshire’s finest Shoegaze/prog bands, KOYO. It was definitely worth the early wakeup call as the young quintet fire through a fine set showing professionalism and talent beyond their years. A fine blend of Porcupine Tree-esque  guitars and a voice which, live, is at times reminiscent of a young Daniel Johns of Silverchair. This is a perfect start to the day as the dreamy soundscapes and crazy guitar effects breathe life back into the tent. The final song even saw an addition of saxophonist Nick Baya, A.K.A Fossa, to the stage for a brilliant finale.

Taking the Sunday midday slot on the Zippo Encore Stage are Michigan-based blues rock band Greta Van Fleet. Obvious Zeppelin-comparisons aside, this young 4-piece wow the crowd with a stunning show of soaring vocals and expert musicianship that far exceeds their youth. Guitarist Jake Kiszka has the makings of a guitar great, taking the crowd on a rollercoaster journey with his technically outstanding solos (including one played behind his head!), and it’s clear to see just how much fun the band are having on stage. With a debut full-length album due later this year, expect to see these guys skyrocket over the next few years.*

“Greetings Download, I am the living reincarnation of Jimi Hendrix”, quips Dani Filth as Cradle of Filth take to the main stage. Bringing the darkness to the midday summer heat, CoF showcase themselves with a brilliant set of old, new and terribly brilliant dad jokes. Opening up with ‘Guided C*nt’ it is clear that Dani and the gang aren’t going to be holding back any punches. A sizable crowd has gathered to watch to black metal legends in the blistering heat, I can’t even imagine how guitarist, Richard Shaw must feel, dressed in a full length leather trench coat but the unusual setting doesn’t stop them from putting on one hell of a show. One of my personal favourites ‘Born in a Burial Gown’ sounds just as brutal as it did back in 2001 and latest release ‘Heartbreak And Silence’ sounds brilliant.  Topped off with a crowd surfing Jesus and the classic, ‘Her Ghost In The Fog’, Cradle of Filth wows the crowd in a very unnatural setting. We caught up with Dani after the show, to hear what he had to say about the performance head here.

Following on from Greta Van Fleet’s technically brilliant, 70s-influenced blue rock, we get Norway’s Turbonegro. Set against a beautifully psychedelic backdrop, and in an array of flamboyant stage costumes, Turbonegro are a band who know not to take themselves seriously, but beneath the humour and campiness of it all, lies a band who know how to write a catchy hook (a common theme across a lot of the Scandinavian rock bands). ‘All My Friends Are Dead’ and ‘Hurry Up & Die’ get the crowd moving and singing, but the best is saved for last with a dueling crowd sing-along to ‘I Got Erection’ ensuring the crowd leave in high spirits.*

Sunday teatime comes along, and what better way to relax than with a bit of Swedish extreme metal! Kreator were described as the heaviest band on the bill this weekend but I think that crown bellows to the mighty Meshuggah. Considering the sheer number of people watching Shinedown on the main stage, Meshuggah still get a respectable turnout, and treat the crowd to a dazzling display of technical brilliance, set amidst a stunning stage setup. Today’s performance relies heavily on material post-‘Obzen’, and in a bold move, ‘Bleed’ is left off the set altogether, but their set still gets heads banging (or at least trying to, given the complex song structures and ever-changing time signatures!). And once again, Tomas Haake proves he’s among the world’s best technical drummers with a jaw-dropping display of concise timing. Definitely a contender for heaviest performance of the weekend!*

Earlier in the day, a plane passed over Donnington Park with a banner trailing behind. The banner read “JESUS [HEARTS] EVERY 1 OF U”. I can’t help but think that may be due to the earlier performance from Cradle of Filth and the Antichrist Superstar himself, Marilyn Manson. Over on the main stage. A monochromatic variation of the United States flag hangs and two MM crosses dangle from the rafters. The heat isn’t still isn’t letting up. So much so that I have actually witnessed people passing out and being dealt with by medics, (stay hydrated, kids!), but it hasn’t stopped a huge crowd gathering to watch the festivals penultimate act.

The intro to ‘Irresponsible Hate Anthem’ begins and the Manson hits the stage. In recent years, Manson has been somewhat unpredictable when it comes to live performances, even more so than normal, but tonight he starts the set in strong voice. Manson still puts on one hell of a show but in all honesty, it doesn’t seem the same ever since the departure of the band members we all loved; John 5, Ginger Fish, Twiggy and Gacy. “It’s like having sex with the lights on” Manson exclaims in reference to the heat before breaking out in to ‘mOBSCENE’.

Unfortunately, as the set goes on, more and more of the unpredictable Manson starts to creep in and the vocals start to sound sloppy, even messing up and forgetting a few lyrics. Between songs Manson punches the mic stand to the ground and gets towelled of by a stage hand, who seems to be getting abuse for his efforts. A girl in the audience gets brought on to stage after being pointed out by the man himself and you can see just how much it means to her, until she gets led to the side of the stage and Manson cheekily pats her on the arse!

‘I don’t like the drugs (but the drugs like me’) intro starts but is soon stubbed out when Manson says “I totally lied, that’s why I wrote a song called Dope Show”, before going in to the 1998 classic.

Attempted chants started by Manson of “I say God, you say ‘Say10’” seem lost on the crowd but a huge cheer erupts when the familiar intro of ‘Sweet Dreams’ start. Towards the end of the set, Manson seems to have regained some composure and starts to feel a bit more like the Manson we love. ‘Beautiful People’ sounds incredible and even has a guest singing from the side of the stage, our mate Dani Filth. I guess Goths have to stick together. Rounding the set off with an unexpected cover of the Gerard McMahon classic, ‘Cry Little Sister’ the set swings back in to glory. I’m still quite unsure as to how I feel about Manson’s set, as an old-school fan I really wanted to love it but I was left with mixed feelings. 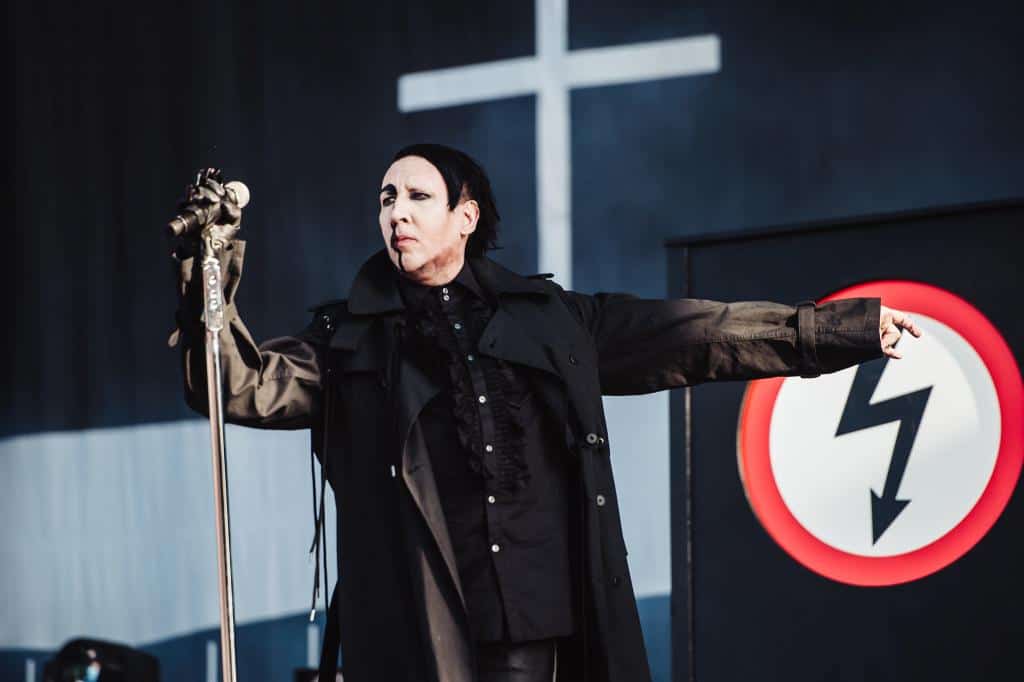 Rounding off the weekend on the Zippo Encore stage are punk veterans Rise Against, making their fourth appearance at Download (and their second time headlining the Zippo Encore stage on a Sunday). With an hour-long set list spanning their entire career, the Chicago natives put on an energetic show jam-packed full of crowd sing-alongs, Zach Blair’s signature jump kicks, and Tim McIlrath’s politically-fuelled rally cries against intolerance. As the sun starts to set over the Download faithful, and over the festival as a whole, set-closer ‘Prayer of the Refugee’ proves an unexpectedly poignant moment for those in attendance. A perfect way to end proceedings on the second stage.* 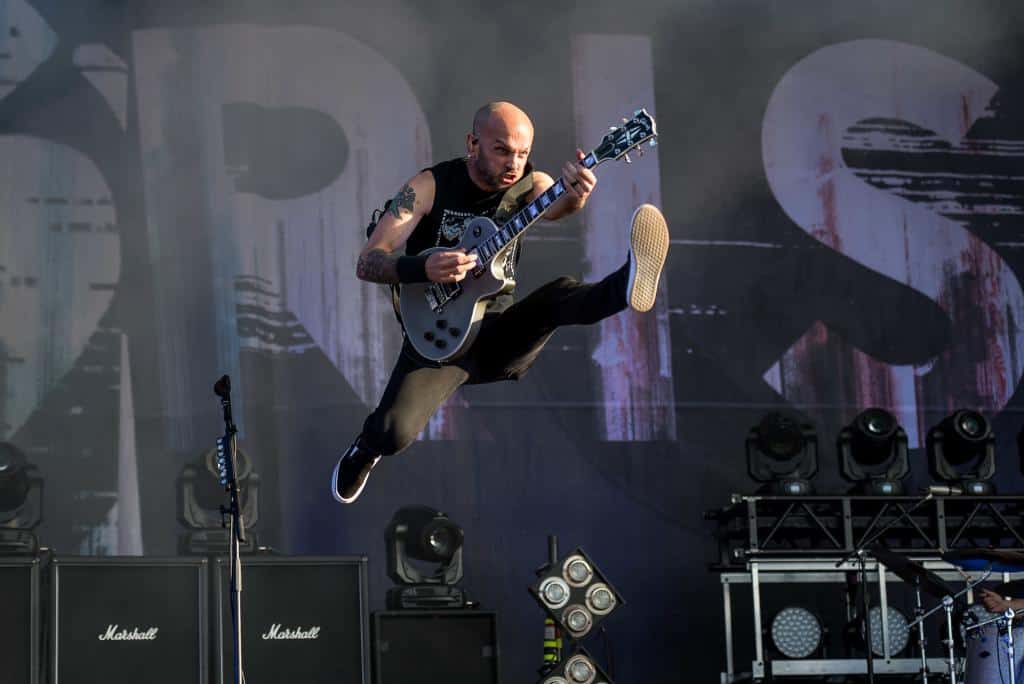 Ozzy Osbourne. Everyone loves Ozzy, right? I have seen him many times before but always in Black Sabbath. I have never managed to catch him solo so I was particularly excited about this set and with Zak Wilde back on guitar you just know it’s going to be a brilliant performance.  The stage is set; the huge crowd have gathered and wait patiently to catch a glimpse of the man himself. Occasional cries of, “SHARON!” below from the crowd which does lead me to fear that some of the audience may only know him from the hit reality TV show. 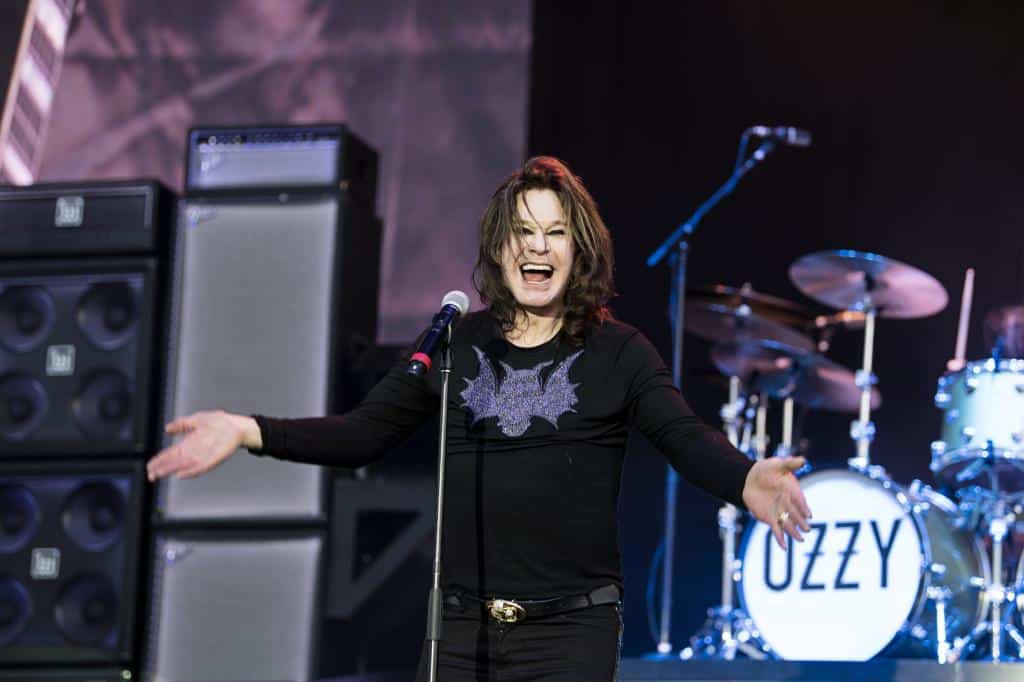 “I CAN’T HEAR YOU” shouts a familiar voice from behind the stage as a video begins to play on the screens showing just how incredible Ozzy’s life and career has been. Ozzy and the band arrive on stage to a rapturous applause and in front of a wall of amps break straight in to ‘Bark At The Moon’. When the opening keys of ‘Mr. Crowley’ begin, the crowd goes wild. Ozzy is in fine voice tonight and even after all these years is still one hell of a performer. I think that’s what some people forget. A lot of people will see him as this bumbling comedian we have all grown to love on our screens, but it’s easy to forget that this guy is the voice and living incarnation of heavy metal. An incredible singer, performer and frontman and it’s still clear that after all these years he still loves what he does. At his command, 60,000+ pairs of hands clap in unison and the crowd are lapping up every action and word Ozzy delivers. 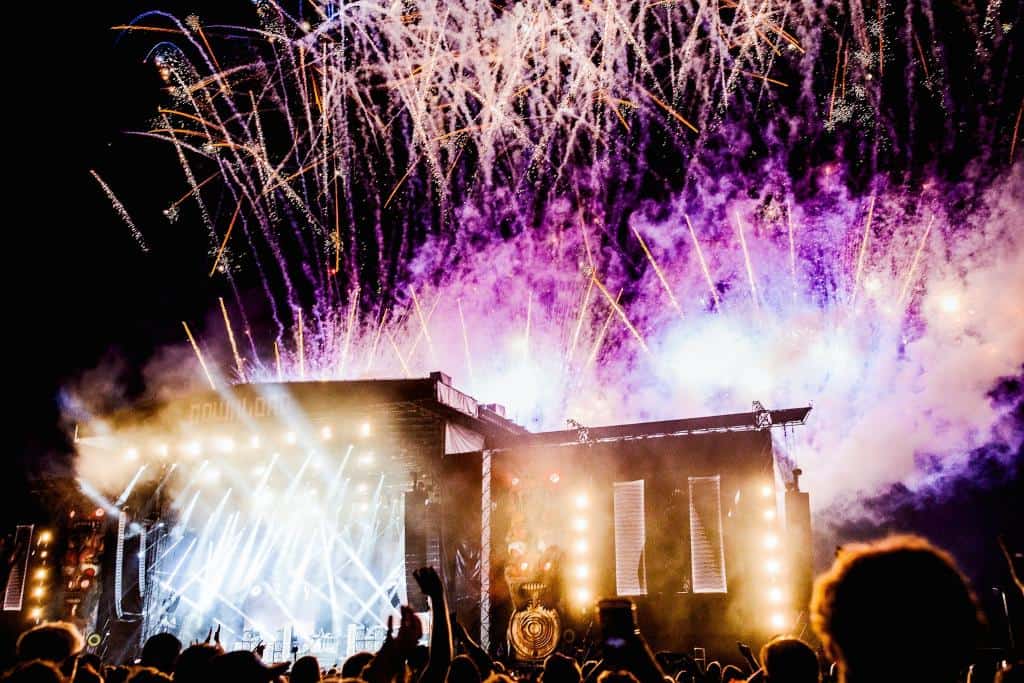 With a band consisting of Adam Wakeman (Rick Wakeman’s son), Tommy Clufetos, Rob Nicholson and of course Zak Wilde, Ozzy’s backing sounds incredible. Of course, an Ozzy show wouldn’t be complete without a couple of Black Sabbath track or two and ‘War Pigs’ sounds and dark and heavy as ever. After a couple of solo’s from Wilde and the guys, even ten minute ones, and an instrumental medley of a few songs, just enough time for Ozzy to have a breather and a cuppa, the set is rounded off with, of course, ‘Crazy Train’ and an encore of the brilliant ‘Mama, I’m coming home’ the set could only end on one song, the Sabbath classic, ‘Paranoid’. As the fireworks go off and crowd give one final cheers, Download Festival is over for another year. A brilliant end to a brilliant festival.

All words by Benjamin Gladstone except *
* Words by Scott Cardwell