By Administrator July 1, 2008 Live
No Comments

‘Woolstock’ is a very popular indoor festival in Leeds comprising 3 days
of Goth, EBM and Industrial bands that draws a crowd from all over the
country. This year the event was held at the underground club ‘The
Subculture’ and as the dark extravaganza was now in it’s third year, its
popularity and success are obvious. Featuring bands like Manuskript and
Inkubbus Sukkubus the event has a reputation for great headline acts
and it showed in the effort the crowd went to with their outfits. I was there
for all three days and managed to get an interview with a band who
many would argue are the UK’s best glam Goth band – Uninvited Guest.
As well as playing Woolstock, Uninvited Guest have toured in Europe
and played the Whitby Goth Festival and feature on Insomnia Media’s
latest CD ‘In The Dark Of Night’ which supports the charity ‘S.O.P.H.I.E’.
I caught up with Dean, Lucas, Jane and Ricky after their show at The
Subculture in the many tunnels under the Merrion Shopping Centre and
quizzed them about the north south divide, new albums, plastic surgery
and jiggery pokery…

a transient crowd moving from one room to the other, you need to have a
captive audience and that’s what we had tonight. To be honest with you
the northern crowds are really good…”
Lucas: “That’s the difference between the north and south.”

Lenore: What’s the difference?
Lucas: “They’re far more attentive to bands, big time, they shout…”
Dean: (laughing) “How to ruin our record sales Lucas!”
Lucas: “Can we edit this?”

Lenore: Of course we can, I’m writing it! (but I’m gonna leave this
bit In and let the UG boys explain themselves!)
Dean: “I think the northern audience tend to be a little bit more interested
in the music than the style that’s involved; I think the southern audience
are more engrossed in putting themselves together than watching the
entertainment that’s on.”

Lenore: Isn’t style part of Uninvited Guest though?
Dean: “Yes it is but…(laughing) I’m gonna shoot myself in the fucking
foot with everything I say, I’ve got to be careful!”
Lucas: “I just think that from experience it’s always been better in the
north. Why? We don’t know really.”
Dean: “Northern audiences take to us a lot better, I think because we’ve
obviously played a lot more in the north. When we played for the first
time in the south, at ‘Gotham’, we had a really good crowd and a good
reaction which was good for us as the opening act – obviously we’ve built
up more of a name now – but when we played Club Antichrist it was a
very different crowd moving from one room to another. It was a great
night out – I’d love to go there for a night out rather than being an
entertainer on the night. I think to be perfectly honest…”
Jane: (Interrupting) “I had a good night…”
Dean: (laughing) “Yeah you did! Jane spent her time in the other rooms
as well.”

Lenore: Which other room was that?
Jane: “Most of them really.”
Dean: “They’ve got a playroom thing, no not playroom the ‘Darkroom’,
and the other three of us were daring each other to go in and none of us
would dare go in. Jane had already been in, but us two (Lucas and
Dean) popped our head round the curtain but didn’t dare go in, but at half
past five, as the club closes at 6am, we said fuck this we’re gonna go in.
We went in, sat down and we were the only three people in there! Sitting
there like see no evil, hear no evil, speak no evil on the sofa!” (Everyone
starts laughing)
(Back to the topic!) “For some reason, I don’t know what it is, but the
northern audience has warmed to us more than the southern.”

Lenore: Do you know what I think it is?
Dean: “Do you think it’s a north/south thing?”

Lenore: No not necessarily, but when I moved to Manchester,
people up north talk a lot quicker, so in between songs when you’re
talking to the audience…(hesitates) I don’t understand what you’re
saying…
Lucas: (Laughing) “Well none of us understand what Rick says!”
Rick: “I’m from Birmingham!”
Dean: “That reminds me of pig off the Pipkins, you remember that?”
Rick: “No…”
(More laughter)
Dean: “Not that you look anything like him…”
Rick:  “The wrong moment and the truth comes out” (laughing)
Dean: (Laughing) “Start again start again!” 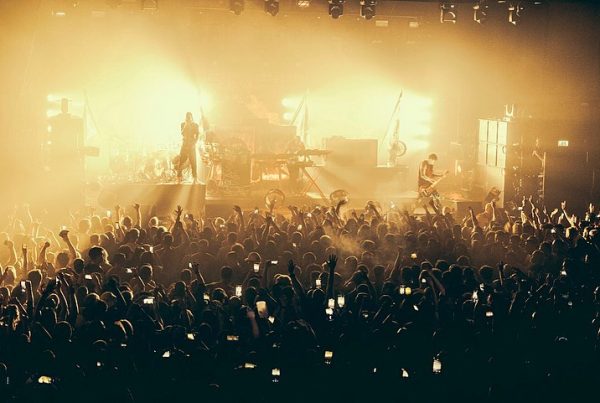