We ventured on to the Hull University campus this evening with high hopes that we would be getting an education in modern electro-pop from Londoners Flamboyant Bella and an lesson in reggae-indie-punk rebellion from Manchester’s own Kid British. We were not disappointed… 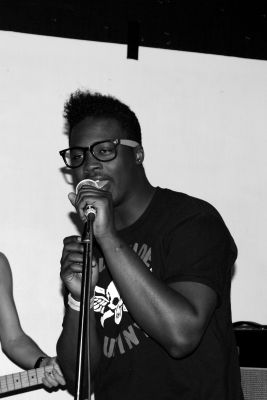 The opening act shone this evening, despite numerous sound issues and a lack of major support. Flamboyant Bella‘s quirky brand of disco-pop comes across like a louder Sixpence None The Richer or a heavier Lily Allen and it works. Opener ‘Get A Reaction’ is our favourite track of the evening and it sees the band take the small, cramped stage and turn it into a mini stadium for just a few minutes of blissful pop-rock that Debbie Harry would be proud to have in her back-catalogue. Also on tracks like the Cure-influenced ‘Cracking Up’, the four-piece jump around and keep the people in attendance happy with some jerky guitar work, nifty keyboard elements, spikey drums and Flo Kirton’s varied vocal tones. Similarly, on ‘Crazy Cool’ the band show themselves to be so much more than your average indie act – they use 60s pop, jazz and blues elements to achieve the maximum aural impact and likewise on their final track (despite suffering keyboard issues) the group showcase an energy that puts even the Foals to shame. Indeed, ‘Absolutely Wankered’ is a defiant tune that features massive beats, overpowering synths and James McBreen ‘s strong, almost punk vocal style along with a few tasty guitar moments to command any onlooker to bounce around like a maniac, and it works here – though Flo and co. seem a little unnerved by the loud-mouthed audience, they pull off a solid performance. In summary, this band should be on your ones to watch for 2010 – expect big things. 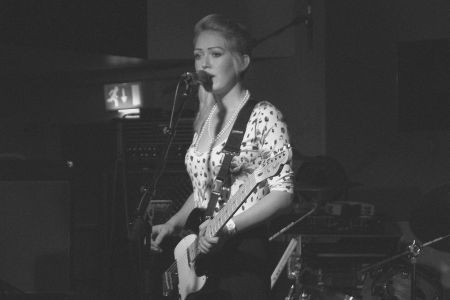 Kid British meanwhile are a different kettle of fish altogether and we should say now that we consider them to be a standout voice within contemporary Northern Britain’s music scene. From the off the band incite a small riot within the crowd using their vibrant, anthemic and totally raw ska-tinged indie-punk tunes. Standout tracks include ‘Elizabeth’ –  we interpreted this as a sexy tribute to our Queen, but it’s open for interpretation though, we are sure? ‘Our House Is Dadless’ (a humorous take on the Madness‘ classic) is the ultimate soundtrack to right now while ‘Part-Time Job / Shirt And Tie’ as a tune is pretty close to perfect and it takes serious issues and incorporates them into an accessible, dance-friendly powerhouse that is as inspiring as it is infectious. This aforementioned track has got such a wide appeal with its sprinkling of dancehall influence mixed in with a healthy dose of electro and a pinch of credible indie. This band are really, truly relevant and new. Their sound proudly borrows from proper influences including The Specials, and Gorillaz but the group certainly put an entertaining and slightly heavier spin on what’s been done before. It really is insane within this tight space and people are crowd-surfing to our left and right while the band keeps the strong atmosphere going (all the while promoting the peace by joining the Hull fans in their persistent chants of “Yorkshire” – admirable for a Manchester-based band, yes?). The night’s mood is summed up within the track ‘Lost In London’ in which the lads talk of their experiences of getting…lost in London – every Northerner has done it, right? – on this the clever lyrics include: “These maps I can’t use them, I just wanna get to Houston, I ask so politely, but they just walk right by me”, and they wrap nicely around strong vocals and chilled-out keyboard work to draw the evening to a close.

Nope, it’s not dark music in the slightest, but this stuff is pretty darn good and definitely worth your time. Check this lot out.