By Editor
By Editor October 8, 2017 Leeds, Live
No Comments

My first ever experience of Gary Numan was back in a music lesson at school where we were allowed to bring in a record of our own choice and to explain to the class why we liked it (Listen and Tell). This was July 1979 and I can’t even remember what I brought in(probably Queen II) but one girl in the class had Tubeway Army – Replicas  and I can still remember the general hush in the room when ‘Are Friends Electric’ was being played – it sounded like something from another planet, and everyone left that lesson with a new introduction and greater admiration for the girl, particularly as Top of the Pops on TV that night had a white faced android singing the very same track. 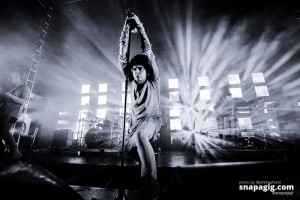 The first LP I bought and paid for with my own money was The Pleasure Principle and tracks like Cars, M.E. and Metal became staple sounds in my bedroom every night. However, this was largely the only dabbling of early synth music for me as post punk and metal took over my record player in the 80’s, as a result I never saw him play live – until now! 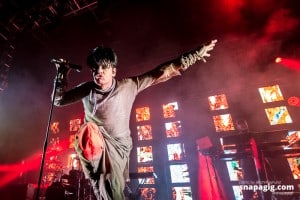 Gary Numan emerges from the smoke on stage like an extra from Mad Max, fresh from a post-apocalyptic desert in an all grey outfit, mummified ties around his hands. A permanent pout on his face emphasises his now slightly aging cheekbone structure. There’s some seriously heavy white light, strobes and flickering TV screens behind him, then a boom of sound with Ghost Nation belting out of the speakers, the entrance is quite perfect. 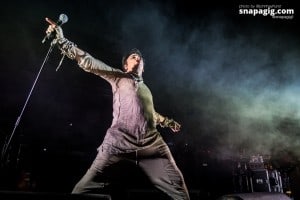 A third of tonight’s setlist will feature Savage – his new album, that’s the promotion bit for this tour – previous tours were all about anniversary albums but the new stuff has found its own neat slot in the set and now the band can move with ease across an almost 40 years career span. A new track like My Name is Ruin can now sit nicely after Love Hurt Bleed from Splinter, and before the classic Cars.  As you would expect the biggest reaction from the audience is reserved for the likes of Down in the Park and Cars and his reworking of these and other older tunes. 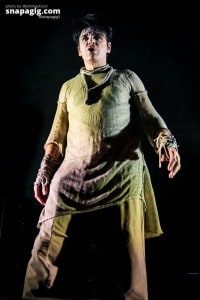 All the while Numan is in constant pout, pose, and contorted reaction to the shift of synthetic sounds coming from the machines, and from his human cohorts, who were equally fierce in stature.

This is powerful stuff and whilst the Numanoids are an incredibly loyal bunch and would follow him anywhere, and have through some quite difficult landscapes, there is much for the casual fan to appreciate here. The influence Numan has had on such bands as Nine Inch Nails, Rammstein, Ministry and even Basement Jaxx (M.E. sampled for “Where’s Your Head at”) is there for all to see.

Numan has had his critics in the past but in his senior years it feels like he is able to consolidate his career and still produce some stirring new material and play some commanding live shows. Final encore Are Friends Electric still sounding as alien now as it did almost 40 years ago….Nuuuuumaaaan! 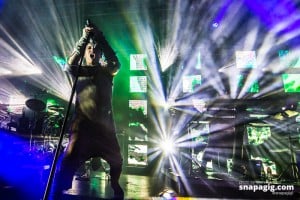