And Incubus are back and touring latest album ‘If Not Now, When?’. After a five-year album hiatus since 2006 (apart from their greatest hits collection, ‘Monuments And Melodies’ released in 2009), the Californian band perform an outstanding set in the first of two gigs at Manchester Apollo before embarking on the rest of their European and world tour. 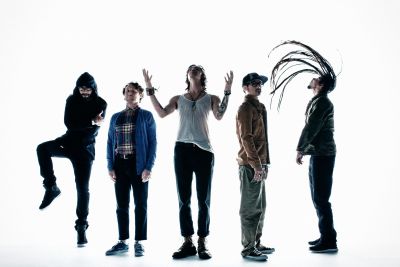 Before the band even step on-stage, the expectation for tonight’s performance is tangible. Northern Incubus fans have had a long time to wait in order to see Brandon Boyd and co return with new material, and the place is packed. London support act fiN start off proceedings confidently with their own brand of alt-rock and entice the crowd further with anticipation for the main attraction. With many expecting a seventh-album-heavy set-list, it is a delight to see Incubus begin with two vintage tracks, the politically powerful ‘Meglomaniac’ and ‘Wish You Were Here’; both spark a singing crowd into an excited moshing euphoria.

Notable in its absence is the feel-good powerhouse ‘Are You In?’, but an acoustic interlude with lead guitarist Mike Einziger and Brandon Boyd alone on-stage for ‘Love Hurts’ is a particular highlight tonight. With the rest of the band back on to do their thing, a rapturous crowd join in with ‘Drive’, a song that evokes early 2000s nostalgia and truly humbles the appreciative band.

As well as an impressive set by the group, Incubus put on a fantastic show; a large screen with atmospheric visuals and live images of the band playing add to the atmosphere and positive vibes. What is instantly clear is that despite an incredible twenty years together, Incubus have once again managed to hit another creative high, with their new album moving into a direction which signals a maturing group.

Brandon Boyd still sounds as good live and recorded as he did in 1999’s breakthrough ‘Make Yourself’ and still takes his shirt off, which… is nice. 2011 singles ‘Adolescents’ and ‘Promises, Promises’ sound new and innovative and yet are intrinsically like the music Incubus were always capable of making. The fact that the Manchester rocked out to these songs as much as classics like ‘Nice to Know You’ or ‘A Certain Shade of Green’ is testament to the band’s enduring appeal.