Amalgamation Festival in Leeds has a great concept – an Industrial-punk all-dayer that opens the door for more than a handful of acts each year to come and showcase their talents to Yorkshire’s dark culture masses. With Friday’s event featuring Action Directe, Death By Electro Giants and Imprint, Saturday’s event was a golden opportunity for fans of the genre to get involved in the scene. Unfortunately, the event suffered a few set-backs with a number of last-minute cancellations, but those who showed up worked hard and rocked the house as best they could despite numerous technical problems and issues. 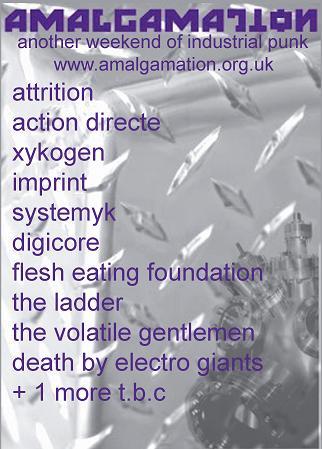 DAY ONE by Kevin TWF

) in. Bassist Chris couldn’t make the gig, unfortunately, but the inclusion of additional vocalist, Kelly, proved to be as brilliant as it was surprising. Their set is relatively short and to the point, ‘F*** the Wreckage’ fires things off nicely before the band quickly launch into new single ‘Dirty Bomb’ – vocalist Steven McGarry scowls as he growls out the post-war inspired lyrics. The trio are completed tonight with guitarist Brendan who provides the rhythmic slicing which unites with the pounding backing drums to complete the musical onslaught. Definitely a band for fans of the likes of Ministry and KMFDM.

) is laid back and calm. In all cases, Martin Bowes controls the backing track, which is often led by deep psychedelic bass-driven tones. Sin D’ Rella provides the enchanting vocals to material that really isn’t danceable. It’s just great to sit and watch. After each track there’s a silence before the applause, simply because everyone has to pick their jaws back up, before clapping. There’s something about this performance that just transfixes the eye and hooks the ear. We’ve spoken before about music that drags you and takes you to another world and that’s pretty much where we are tonight. It does seem a strange addition to the bill – but Goths and Industrialists alike all seem impressed.  A massive highlight would have to be the closing track, a cover of Joy Division’s ‘Love will Tear As Apart’.  This was something really special – a minimal deep-bass backing, with the vocals being the euphoric driving force of the song.

) headline tonight. They have two guitarists, keyboards, a synth-drum kit alongside event organiser Joel on vocals. This does make things quite cramped on the small Santiago stage – but the band just about manage to wiggle a bit. While the latest material has moved into a different direction, their classics are just…well, classic. The opening beats of ’60 Million Guns’ still have one stood to attention ready to riot. Tonight the group offers up a top-quality live performance and everything works together nicely. They were a good band before they split in 2008 and they have maintained that consistency since they reformed – their last song in the set tonight is ‘We Can Rebuild Us’ – and we most certainly hope they do build on their past and present material and evolve positively in the future.

The chaos, comedy and downright outrageous performance of Yorkshire’s own Volatile Gentleman (

) was definitely an intriguing start to proceedings and their silly-yet effective electro-punk was more than enough to keep people entertained and forget the absences littering the billed schedule. Tunes like ‘The Strange Death Of Liberal England’ and ‘Dirty Trick’ along with the vocalists’ persistent movement persistent movement (and attempts to annoy and invoke the sparse crowd), packed in just the right amount of uncomfortable atmosphere and balanced that against some punk-as-fuck riffs and fairly decent D&B-style beats. If you were to think of Killing Joke being raped by The Insane Clown Posse while being watched from afar by the lads from Pitchshifter, you won’t be close, but it’s a start. The Kraftwerk-style disco moves at the end definitely earn this lot an extra star.

) are infinitely more experienced at creating contemporary Industrial metal that packs an almightily relevant punch, new tracks like ‘Rise Up!’ with all its digital hardcore chaos balance nicely alongside older material like the NIN-baiting ‘Fatal Drug’ and the unit’s beer and sweat-fuelled take on ‘Too Drunk To Fuck’ by Dead Kennedys. Here in Leeds, despite a barrage of mic problems to open, the York natives show why they are one of the strongest talents on the Northern alt-scene.

) meanwhile are a whole different blend of cyber sounds. Taking elements of established Leeds act Cybercide and mixing that in with old-school Pysclon Nine, dual vocalists Vindicare and Marial-K (minus synth maestro Katrina Angst on this occasion) knock out some emotive and loud EBM stompers including the haunting ‘Clockwork Freak’ to the delight of those in watching. It will certainly be interesting to see how this relatively new group develops sound-wise in the future. Indeed, while there is certainly room for some growth and development, these boys don’t seem to be too far off becoming one of UK EBM’s standout acts.

), but man…it was worth the bloody wait (no pun intended…honest).With an entertaining stage show that consists of loads…loads of fake blood and some cracking techno-punk tunes like ‘Purging’ and ‘Dead Shall Rise’, it really doesn’t get much better than this two-piece right now. In fact, we would like to contend that Flesh Eating are the best live Industrial act on the UK underground right now. Whatever you are into whether it’s EBM, Industrial, punk, or Goth you really should see this crazy fu**ing band – it’s all about frenzied guitars, glitchy Industrial elements and diverse vocals. In our eyes, on this day FEF should have headlined as Attrition (

We do have mountains of respect for Martin Bowes and his band’s seductive Goth-trip-hop sounds that collectively fall somewhere in-between Tricky, Portishead and Joy Division on record. Tonight, unfortunately it just wasn’t this world-beating act’s best showcase. This could just be because of sheer luck, or the fact that the band appeared drunk, but any of the atmosphere created (by the smoke along with the slightly annoying-yet-fragrant incense carried by Bowes throughout) was destroyed early on by a mic blowing up twice. While standout track ‘Two Gods’ sounds just as hypnotic live as it does on disk, on the other efforts the male vocals sound unusually muffled and the crowd appears to be utterly transfixed or completely bored. That being said, Sin D’Rella’s vocals are definitely enchanting and the evocative rhythms are in place, but here there is a certain air of complacency within the music lovers and on stage that prevents this from becoming a particularly notable headline performance.

For more information on the festival visit the official website. 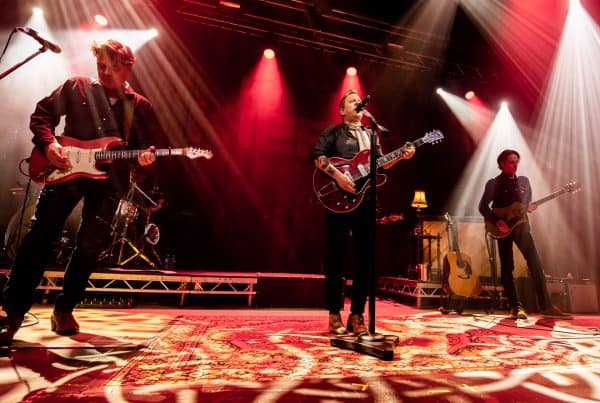