Very civilised gentlemen in their cricket whites play genteel games on the two pitches either side of the too-calm path. The sun has come out and the middle-England scene by the tree-lined roadway looks like something out of Midsomer Murders, before the murder happens. Is this really where a festival is going down? 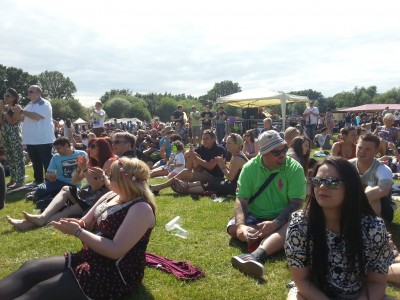 The path turns a corner and ahead there are families with prams heading towards the small ticket tent set between two hillocks. Must be the right place. Upon reaching the tent, the familiar low rumble of live outdoor music threatens to break across the mound – yep, this is it. But where is everyone?

One wristband, two hundred metres and three minutes later, over the crest of the mound and boom: over a thousand people mingling around food tents, amusements and the main stage on the broad field. Like much of York, the best things are always hidden away and despite the large crowd it feels like we’re all sharing the same secret: this is where the best music is today.

Arriving at the main stage just at the start of RedStar’s set, with no idea what to expect, a free spot on the grass is found and out comes the notepad and pen. However, no scribbles happen until at least three tracks in, because the pen hovers as Soundsphere sits mesmerised.

The energy is enthralling: lead vocalist Will Bloy leaps around the stage, dance moves reminiscent of Bez from the Happy Mondays, while synth player Joe Leadbeater lives up to his name by beating the life out of the keys while simultaneously thrashing and stamping and singing. The drummer looks bright red (even from here) with exertion, and the guitarists have their laid-back cool vibe going on.

Once the visual aspect has sunk in, the tracks start to speak. RedStar have great lyrics, stomping riffs and anthemic choruses. It is refreshing to hear the West Yorkshire accents seeping through the vocals, giving a feeling of home and heart right within the music. A mix of old-school rock like Led Zeppelin and new-school mashups of mould-breakers Arctic Monkeys fused with the swagger of Oasis means RedStar are moving their genre forward and are definitely ones to watch. 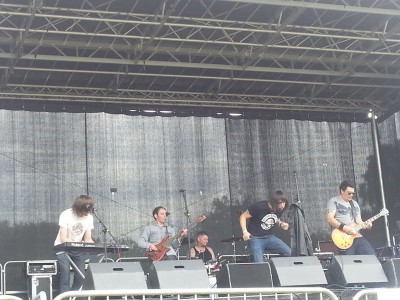 Next up, the chilled – almost lazy – vibe of Chris Helme is a perfect complement to the comedown of RedStar. An acoustic set with the unusual accompaniment of cello transcends the York location and delivers music that wouldn’t sound out of place in a film. Imagine the musical montage when the hero and heroine are separated in their first conflict, the moment when they realise they actually love each other: Chris Helme delivers smooth, soulful lyrics that plunge the heart.

Changing the stage up again was Hull band, Black Delta Movement. A four-piece guitar outfit with clear undertones of The Black Keys, and (perhaps weirdly) Razorlight, the self-confessed ‘neo-psychedelica’ band deliver a series of foot-stompers. The kind of music you would have loud while driving down an open road, the crowd bobs along to a range of decent tracks in a set which feels too short for the talent. 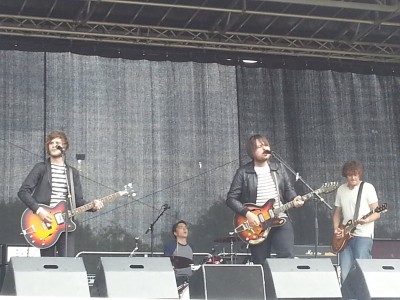 As the mid-afternoon heat began to fry the more Casper-like of the crowd, Mark Morriss of Bluetones fame steps up to the mic. A crystalline reed-like tone to his vocals, just him and his guitar hold presence on the stage with a laissez-faire attitude. Kicking off with some newer material, there are definitely some Morriss fans in the audience as they start to sing-a-long. ‘Consuela’ is a standout track, with a far more distinct, soulful country twang than the rest of the set. Older songs, such as Bluetonic, go down a storm with the crowd and there is a blissed-out atmosphere permeating the audience. 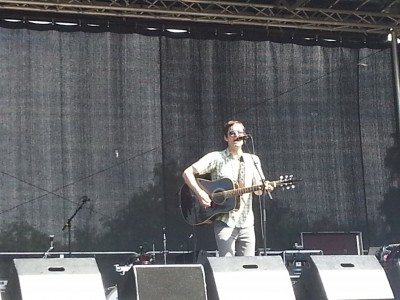 The lazy vibe is subsequently shaken up with the arrival of Death To The Strange, a unique band hailing from Salford. A ska-infused band with Madness-equivocal energy, the stage is overrun with playful vigour once again. Sarcastic and pointed lyrics are juxtaposed with the bright and catchy melodies to give a truly unique performance. Soundsphere wishes to stay longer, but alas is promised to the Entertainment Company tent for…

…And The Hangnails, the York-based duo who deliver a wall of sound seemingly impossible from just two people. But then, like the GravelTones, it isn’t hard to do when you have the talent. Vocalist and guitarist Martyn leads the way, pouring everything into the performance – while drummer Steven would win Olympic gold if facial expressions were a sport. The timing is cracking, the riffs solid, the understanding between the duo faultless – even on a couple of new tracks. Always a pleasure, …And The Hangnails draws a crowd to the smaller music tent who don’t want the set to end.

There aren’t many local festivals which bring such a showcase of music with great variety and talent, but the Apollo Festival delivers in a sun-drenched time-stop of an event. Bring on 2015.