Okay, so we were a teensy-weensy bit late getting to our interview scheduled in with Asking Alexandria this afternoon (the Leeds one-way system is insane… really), but thanks to an understanding AA tour manager, and ever-eager vocalist Danny Worsnop along with our own dedicated snapper Jamie Mahon (props for keeping everyone entertained there bud…), we manage to get everything sorted eventually, and the resulting (incredibly chilled) chat with Danny will be out in some form for your enjoyment real soon. 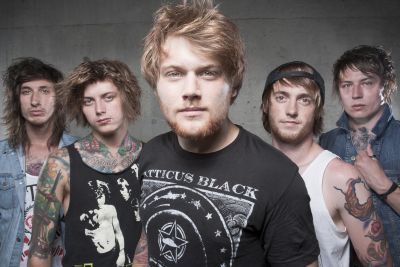 Anyhoo, come gig time and when Asking Alexandria take to the stage it’s all pretty intense… and bloody warm. As one can only expect from a band now used to regular international TV appearances and stadium tours, the band are on their best form for the excitable Yorkshire crowd. It is clear from the off that, while the band have moved on from their York roots to a rock-star-ish lifestyle in America, they haven’t forgotten the fans that afforded them that privilege in the first place.

The most popular tracks in the AA back-catalogue are played with real vigour and ‘Not The American Average’ is a particular highlight for us, and other fans who do their best to mimic the vocalist’s heavy growls. Worsnop told us quite honestly and truthully earlier, something he learned from supporting iconic rockers Guns ‘N’ Roses last year was that G’N’R fans are not really fans of his band, but for us at least, there is certainly a similarly addictive and anthemic quality to the material showcased tonight… yes, of course it’s a different sound, but the same conviction and undeniable confidence is there in most-every hook and beat. Though, it’s got to be said (and again, it’s simply our point of view…) that Alexandria offer a lot more variety in terms of vocal range and style exploration than the glammed up legends – yep, they have their dubstep moments in along with the pure metal and classic rock sounds, but to be honest the electronic hints that grace some heavy-as-frick tracks like ‘Closure’ are welcomed by the audience just as much as the proper hard beasts like ‘A Prophecy’, ‘Dear Insanity’ and ‘To The Stage’ are.

Indeed, as ‘The Final Episode’ incites a riotous response from onlookers and closes off the night, any critics, whatever they think of the band personally at this point, have to at the very least, respect the group’s collective showmanship, energy and desire to entertain and involve the audience. This has been some excellent work from a band that really do deserve all the hype.