Everyone knows that this band has been through a lot over the years and that they are no strangers to the spotlight or mass controversy. Last time Atari Teenage Riot were here was with the late Carl Crack and the band’s inner turmoil had reduced them to performing spiteful white-noise work-outs, as documented by their infamous ‘Live At Brixton Academy’ EP from 1999; all of this is acknowledged by a heartfelt Empire during their London return. 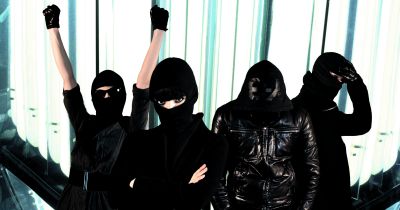 It’s only apt that this return should begin with new single ‘Activate’, a deliciously retro burst of rave synths and anthemic shouting. While The Prodigy’s recent attempt to return to their roots seems to have met with a mixed response from their long-time fans, ATR have no such problems. Everyone here seems helpless in chanting along as if they’ve known the song for years, the floor an instant anarchic mess of dancing and moshing. This also served as an introduction to Crack’s replacement, the dubiously-named MC CX Kidtronik whose dance moves and rapping vocals prove an effective counterpoint to Empire’s Iggy Pop posturing and unhinged screaming (it had previously been difficult to distinguish between the male members’ “singing”). Hanin Elias’ absence is not as much of an issue as expected either, with Nic Endo being more than up to the challenge of projecting her sex appeal and emulating her voice-straining shrieks. Anyone who doubts that a purely electronic band can put on a peerless live show has obviously not been to an ATR gig; while the amount of time all three members spend in the front row’s faces may cast aspersions on how much of the music can rightfully be called live, the sheer intensity of the performances and brutality of the beats make for an unparalleled experience.

The band barely stops for a breath between songs, the crowd responding to all of the material with the sort of special energy that both fuels and is fed by the performances. The set-list darts between classic singles such as ‘Sick To Death’ and ‘Deutschland Has Gotta Die’ and slower (for them, anyway), more hip-hop influenced songs like ‘Atari Teenage Riot’ and perhaps their ultimate call-to-arms, ‘Destroy 2,000 Years Of Culture’.

The latter song in particular sees the almost frightening level of moshing give way to a more unified bounce, everyone in attendance screaming along and seemingly knowing every word of the band’s anti-everything raps. On record, the politics of the unit can sometimes seem adrift in poor expression and mixed messages (see lyrics such as: “cut all policemen into pieces”, from the childishly genius ‘F*** All’), but their agenda seems to make even more sense today than it did 20-years-ago. The world is still going down the drain, and it’s getting even more difficult to know what to believe in; the band’s impassioned ranting may not put things into perspective, but it sure as hell offers an instantaneous release of pent-up pressure.

The later material on display sits more favourably alongside the bona fide classics than might have been expected, with ‘Revolution Action’ and especially an extended, squall-heavy ‘Too Dead For Me’ go down a storm here. However, the highlights are definitely the selections from the first two albums, which are both well represented by full-throttle renditions of favourites like ‘Speed’ and the pulverizing ‘Get Up While You Can’ (everyone has no choice in the latter matter). That the gig ironically ends with an incendiary ‘Start The Riot’, the first track from their first album, seems to signal not only that the band are taking tentative steps towards a full-time return, but also that Empire genuinely wants his audience to see his group’s music as being still relevant to these politically-chaotic times. Addressing the baying crowd before the finale, he offered a sincere apology and explanation for their last London show – over 10-years-ago – as well as displaying gratitude towards the fans, whose maintained interest in and passion for the band has helped make this current comeback more than a cynical cash-in. It seems only fitting that the gig should end in a hail of screeching synths and strobe lights, the audience lapping up every last note of noise as the band depart to rapturous applause. It is a literally bruising return that will hopefully last longer than the dates currently scheduled; despite Empire’s ongoing solo success, his stage presence is never stronger than when performing these songs with his ATR cohorts. It will be a real shame if we all don’t get the chance to savour them some more soon.