Binary are one of those bands for us, they tick all of our boxes. Catching them live and in living colour in one of our favourite North West haunts in The Mad Ferret in Preston, our enthusiasm for their fuzzed-up, distorted rock sound grows. 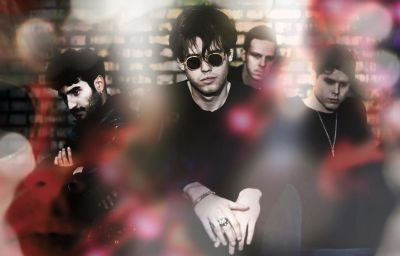 We like Preston. Not many other people in the music scene up north (yep, there is one…) seem to dig it, but there are plenty of great bands and artists here just crying out for some exposure. All these local bands are heavily influenced by Preston’s somewhat bleak industrial landscape; they try and bring some beauty, peace and where possible some good ol’ fashioned rock to the disenchanted (heavily student) population who feel like “there’s nout goin’ on unless we go to Manchvegas (sorry Manchester…)”. Tonight is no exception. The Antics team at Mad Ferret have put on a belter with some touching indie sounds from two standout acts; Blossomer, and The Escobars as well, introducing the event.

Indeed, it’s all very chilled and comfortable at the back of Mad Ferret until Binary take to the stage with their angst-ridden walls of Jesus And Mary Chain-infected tunes. If it weren’t for the fact that the one-time god of f*ck Marilyn Manson hand-picked the band for his last solo UK tour, we’d be at a lost to see the connection (for all accounts though, Binary actually blew Manson off the stage, performance-wise). Binary’s music appeals to the indie kids, it appeals to the goths and even a few metalheads too; it’s dark, dingy and a little bit wonderful. Heavier tracks like ‘You Need The Blue Key’ smash into the ears and give an indication of the heavier direction the lads have been moving in (see ‘Modern Man’ below for another fine example). Meanwhile, tracks like ‘Prisoner’ soothe, and evoke more accessible indie-led influences (see Editors and Some Velvet Morning). Nice work. We’re excited to hear the new material played out on this night put down on record. We’ve put them in our pick of the year and track of the year lists when they were just emerging, and now Binary have stood up, a couple of fingers raised and then moved forward to their own headline slots and rave reviews, we expect huge things from this lot. Don’t say we didn’t warn you.