In a small room in the middle of the Black Country, Wes Borland assembles his men and returned to the UK with high hopes and darkness in their hearts to give fans of both BLB and Limp Bizkit a taste of what he does best for the first time in Europe. 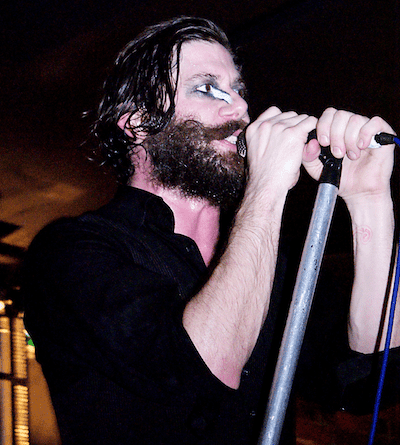 Main support for Black Light Burns tonight is Welsh electro-alt-rocker Jayce Lewis, who holds a dark, hard hitting industrial step. He lords over the crowd with a look and sound that resembles acts such as Combichrist (who he has supported) and Rammstein, and gives a cheesy grin with every bang of his head. Business as usual and a top performance from the lad.

As Black Light Burns arrives on stage, the room knows that they are going to have a tough time of it tonight, unfortunately. Wes has already been having trouble with the amps and after the under-rated but much loved ‘Stop A Bullet’ opens the set, he decides that there wasn’t enough light on neither the band or the audience. In true Borland style though, he manages to make it work to his advantage. In a jesting-style slagging match, he rips on the lighting crew saying that “the lights smell like grilled cheese sandwiches”! They push onward however, playing pieces from both albums and seque releases.

“As this is our first tour of Europe, we know that there will be a lot of Limp Bizkit fans wanting to know what I’m up to” says Wes in an interview with us before the show. “This is a taster for fans of both acts and hopefully when we return next year their will be twice as much interest!”

Most loved are the quirky covers that the band has released with the album ‘Cover Your Heart…’ Both ‘Lucretia My Reflection’ (by The Sisters of Mercy) and ‘So Alive’ (by Love & Rockets) are blasted out much to the crowd’s delight. A lot of the rest of the set comes from the last album, including ‘We Light Up’ and ‘Splayed’. There was time to even fit in some new songs like “Good To Be Gold’, which is set to be a fan-favourite. A very strong performance on UK shores for Borland and co, then. We’ll look forward to having them back!