Ska-punk; you just can’t not like it. Maybe it’s something in the water, but it seems to be catching the UK by storm at the moment. Go to any music venue this weekend and chances are you’ll see at least one trumpet lying around. Are we here in 2017, possibly facing a revival of what was basically a revival in the first place? We can only hope. Enter Broken 3 Ways, a six-piece ska-punk group from the Wirral with splashes of funk and even surf-rock thrown in there for good measure. 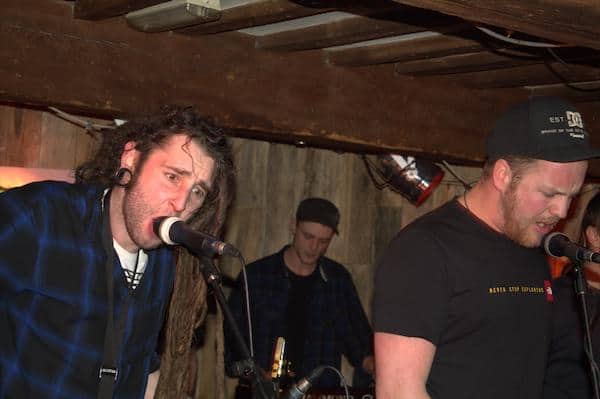 The dance floor of Telford’s Warehouse in Chester was dead as they began their set. Within about ten seconds, it wasn’t so dead any more. The busy Saturday night crowd had descended upon the stage, drawn in by utterly infectious brass melodies and stomping rhythm. Their stage presence helped this along too, as each member exudes a cool baggy-clothed sort of aura. Rest assured, this doesn’t stop them from dancing around whilst excitedly encouraging the crowd to do the same.

The refreshing thing about Broken 3 Ways is the call-back to a more pure sort of reggae style, which is almost entirely driven by keyboardist ‘Spud’. The organ-esque tone seems inspired by the likes of The Slickers (see Johnny Too Bad). This, combined with the punk-rock element, makes for a really interesting take on a genre that can sometimes go down stale. The only thing they could do to liven things up would be to deviate a little from the constant 4/4 timing, which would be sure to get the crowd moving even more.

The live performance itself was absolutely tight. Drummer Ben Green didn’t miss a beat for the entire set and the band as a whole generally displayed a proficiency with their setlist that only many, many hours of practice can achieve. It must be hard to pull off such neat playing when every member is going so crazy, particularly lead vocalist and saxophonist Jay Peers-Bow, who smattered each song with yells of encouragement to the growing crowd (not that they needed it). He even had a nice message for Donald Trump at one point, whom he called ‘A bit of a racist. Bit of a fascist. It’s the last time we’re all together before the nuclear war.’ Well if the world ends in a haze of radioactive fog, at least there was some damn good music to see it off.

That being said, there were times where some of it seemed to feel a little improvised as the members openly searched for ways to stretch the set out to fit their allotted time. It doesn’t give off an air of professionalism, though this slapdashery does lend itself to their charm.

The set was a perfect length though, consisting of 14 songs in all. By the end the crowd was chanting ‘one more song!’ This was clearly something that Broken 3 Ways are used to, as Peers-Bow feigned reluctance before launching into their electrically charged conclusion. ‘Alright,’ he conceded, ‘but you’d better go fucking mental.’ The floor was literally, and rather worryingly, sagging under the bouncing audience by the end.

Basically, go see Broken 3 Ways. The applause endured well after all six members had left the stage. Of all 14 songs, not a single one was weak, and the covers they played- The Specials’ Monkey Man and The Animals’ House of the Rising Sun were great fun. Turning House of the Rising Sun into a ska piece must have taken some doing, but it really worked. It made me ask myself- can EVERY song be turned into ska-punk? By the way, that’s not only a question, but also a request.