Walking into The Leadmill, you can feel the excitement and anticipation in the air. Crystal Castles are playing Sheffield several months after the release of their infectious fourth album ‘Amnesty’, released in August of this year. 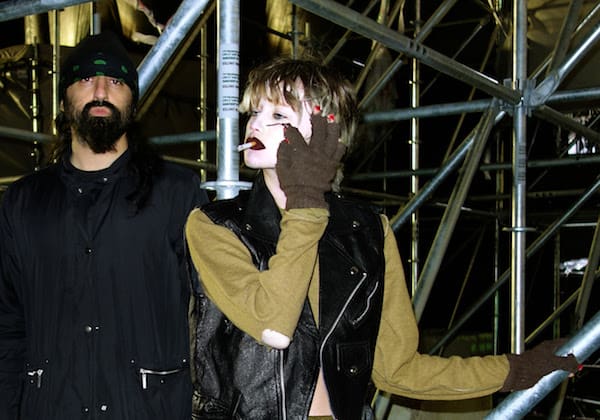 It is clear that Ethan Kath and Edith Frances will provide a captivating show, as the crowd move and chatter to the pre-gig music. Although you can feel the energy inside The Leadmill, there is still a luring sense of scepticism of whether someone can fill the shoes of the departed and recently replaced Alice Glass, who left Crystal Castles in 2014 after a four-year period and numerous EPs and LP s with the band. Leaving because of a “multitude of reasons both professional and personal”, it was always a concern whether anyone would be able to produce the enchanting performance Alice was so notorious for.

20 minutes late, with several throbbing strobe lights behind them, Ethan first walks onto the stage alongside the tour drummer, Christopher Chartrand. Ethan in a black leather attire and bandana and both with thick facial hair, they could almost be mistaken for Death From Above 1979- a band Ethan funnily enough sampled on the first album in 2008. As they tear into their opening song ‘Concrete’, Edith Frances bounces onto stage, dressed appropriately to the aesthetic of Crystal Castles, with a long sleeved dark t-shirt, black eye make-up and lipstick. Flicking her vivid pink hair around, any doubt of the show being tainted by the lack of Alice Glass instantly evaporates, as the crowd surges forward from the presence of the band.

The opening receives great reception, but it’s the pulsing synth sounds of second song ‘Baptism’ that inspires another level of energy and electricity in the crowd. Between the screamed vocals, Edith grabs bottles of water and sprays and spits it into the front few rows, fuelling the anarchic prowess Crystal Castles possesses.

The first half of the set comprises of some material from the new album. Although they welcome weaker reactions than earlier songs, new pieces are placed between anthemic selections such as ‘Crimewave’, which means the set maintains a high level of energy throughout the first half an hour.

Edith occasionally abandons her post as the front woman to become a silhouette in the rampaging strobe, and accompany Ethan on the left of the stage at his corner of various keyboards and synths. Roaring loops and high-frequency gameboy-esque sounds interlude the gap between songs, as the powerful lights assault the eye. The build-up grows louder and louder until Edith bounces back to the centre stage for fan favourites ‘Untrust Us’ and ‘Celestica’.

As Crystal Castles exit the stage, the fluctuating beats carrying on rolling, increasing in speed until the encore. Jumping back into the front of the crowd for the penultimate song, with yet another bottle of water at her disposal, you can’t help but smile at the magnetism Edith has as phones are thrown in the air and hands are out-stretched to try and touch.

The final rendition of ‘Not In Love’, has the crowd bouncing and destroys any doubts that Crystal Castles are not still one of the most exciting electronic bands around at the moment.