Sorry this is late dear readers…we think Jo fell down the loo. Anyhow, here’s her fantastic review of the ‘Demons on Tour’ stop in Sheffield…

Take one girl’s love for industrial music and one rather incredible gig and what do you get? ‘Demons On Tour!’ Now, no gig would be complete without the support acts to get the crowd going and all dancing ready for the headliner, and I have to say in Combichrist’s case they couldn’t have chosen better. 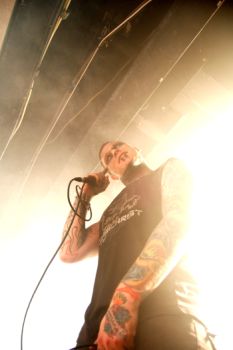 Uberbyte’s pounding self-proclaimed “sturm and drang stompers” certainly lived up to that description and had the glowstick wielding crowd up and dancing in no time. I have to say, the first time I saw this lot was back in 2008 and I was a little disappointed. I eat my words. Never have I seen such energy put into a performance as this. There was much crowd interaction prompting hardened fans to get really into the vibe. I would love to see Uberbyte headline at Corp in the future and no doubt they will be following the success of the latest album. Uberbyte I salute you. 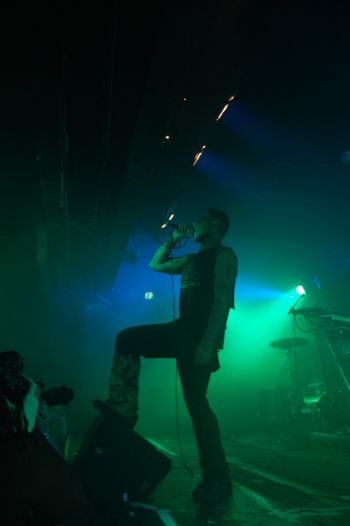 When I saw that Daniel Graves aka Aesthetic Perfection was the support I went mental. This dark and brooding songster describes his music as ‘emotronic’ which might put some people off. Don’t let it. He is one of the most amazing performers I have seen live. He used all of the stage rather than standing just in the middle so the whole crowd got a good view. He can really sing live, you’d think that his screams on record would really be difficult to pull off live. It’s like you’re there in the studio with him. It’s a well and truly top notch show.

Having previously interviewed Andy earlier I was already excited to see Combichrist again. Having seen them three or four times in the UK at various venues they seem to perform strongest at Corp. Upon opening with the first song ‘All Pain Is Gone’ the room bursts to life. Joe Letz’s drumming coupled with Z-Marr’s keys and synth added so much raw energy into the performance and was just amazing to watch. Also, Combichrist always seem to add an element of comedy to a performance highlighted by a drumstick fight between Joe and Z-Marr while Andy continued the standout track, ‘Without Emotion’. The set-list was well thought-out, songs from the new album and classic Combi were covered. It was loud, proud and most certainly in your face. Just the way that you like it.