Depeche Mode. Wow. So, yeah. That was pretty incredible. Dave Gahan, Martin L. Gore and co. school Leeds Arena (First Direct Arena, nowadays, mind) in alternative-electro-rock and pure showmanship and above all else, enthusiasm, in a way that those they influence (Trent Reznor and Robert Smith) just can’t quite manage these days – our opinion, of course. 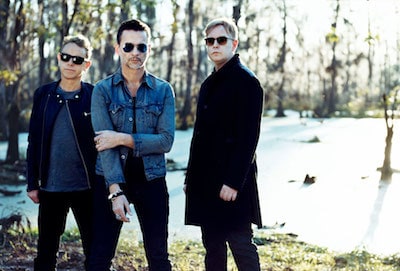 Firstly, we must give props to the guys over at Merrion Centre parking. Yeah, we know it’s weird, but this writer is a sh** driver and props need to be given, because without them, we’d never have gotten to the show in the first place. So, cheers to the staff at Merrion Centre!

Now, back to business. From start to finish, Depeche Mode put on one of the greatest shows we’ve ever seen, and probably the most glamorous show Leeds has seen in a long time. The band look well, like, really well. And they’re loving every second of performing together, and that’s just mint. New material from the guys like the industrialised ‘Angel’ matches up fantastically with the more melodic ‘Walking In My Shoes’ in the early going, and business just picks right up, as does the pace and tone with raging guitars and infinite amounts of swagger. Gore’s musicianship all-round is second to none, while Gahan conducts his audience (often by holding and swinging his mic stand…and hips), completely proud of the gloom-fuelled kingdom he has created over the group’s storied history. The darker, slower ‘Black Celebration’ links into DM’s more sombre tracks – ‘Home’ triggers some wonderful visuals (a blue glow surrounds the vocalist echoing the intense emotion that surrounds this track), for one of the many highlights.

Another real highlight of the whole night comes as Gore leads the charge into ‘Judas’ – now, as you know if you’re a fan of the Mode, this guy can really wail his heart out. Indeed, it’s our opinion that he is one of the best vocalists of our time. And watching this, is one of the finest moments we’ve experienced within any live arena as he leads the crowd in chants for minutes after the song’s conclusion.

Followed up is a remixed, rocked-up and revamped ‘A Pain That I Am Used To’ – it’s harder vibe really gets the crowd moving, and with the signature Mode triangle enveloping the back screens, this will be one that stays with tonight’s audience for a long while. We should probably mention here, the kick-ass contortionists that are the visuals for ‘Enjoy The Silence’ – a stunning and impactful backing to one perfect dark-pop song. An experience you need to see before you die, we think. On a similar note, ‘Personal Jesus’ hits hard, and as an anthem sends the entire space into a frenzy, fans’ arms are outstretched throughout and the band is all smiles, it’s great to see. And it signals the beginning of the end of a near perfect evening. But we’re not done yet. Martin Gore takes centre stage again for a beautiful version of ‘Shake The Disease’ (again, Gore has the repeating phrase “Understand me…” chanted back to him). Next up, we have the ridiculously poppy ‘Just Can’t Get Enough, which, while drastically changing the style of the set, allows fans to really let go and enjoy some grand disco-influenced pop music – cue Mexican waves and lots of jumping around! This leads into the rousing and addictive grooves of ‘Feel You’ before ‘Never Let Me Down Again’. This is the perfect finish to an immense evening, as dancing girls and a DJ with speakers hits the screen, everybody is having an awesome time celebrating a great alternative band’s legacy.