Halloween at The Speakeasy bar in York marked the triumphant return of Digicore, York’s most recognised Industrial metal band. It has been 14 months since the quartet were together on stage and playing their last full-length album ‘Self Armageddon’. 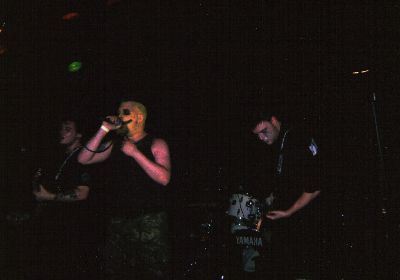 It’s been a while since we last heard from this lot but Digicore came together like they’d never been apart. The set had a definitive World War vibe, starting with a pre-war style sample of the song ‘I Don’t Want To Set The World On Fire’ by The Ink Spots. The air raid siren that followed signified the start of ‘The End Of Days’ and from then on it was very much a fast-paced techno-metal onslaught.

Despite the fact there was a new album to showcase, the group managed to keep an even balance and blasted out some of the favourite crowd pleasers from their first album ‘Synaptic Decay’, such as ‘Fatal Drug’ and ‘Rot’. One can definitely tell that there is some punk influence in a few of their latest songs such as the drum work in ‘Rise Up’. However, the guitar and bass remain true to the old-school Digicore and we were impressed by how well the mix went together live. Their cover of ‘Too Drunk To Fuck’ by The Dead Kennedys is frankly masterful and the mix of punk and metal within is perfectly balanced. It was also surprising to hear how well this song lead into the older tracks which dominated the centre section of the set. Toward the end, the act dove head first into their new material and already there seems to be some potential favourites such as closing song ‘The Guilty Masses’. The show was then wrapped up with the return to The Ink Spots’ sample, signifying the conclusion of the war theme.

The set had a natural fluidity and all four members seemed completely comfortable on stage. Aside from a few technical issues with vocalist Danny Carnage’s microphone, the set was played glitch free and it signalled the Core’s triumphant return.

Check out a live video below: