The hottest of days was the perfect time for one of Yorkshire’s hottest bands to unleash their new album and summer soundtrack rock tunes on the sunny city of York a few nights ago. 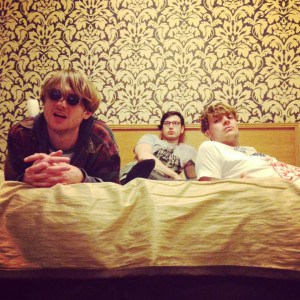 Dinosaur Pile-Up, in the midst of their first UK tour since releasing their sophomore album ‘Nature Nurture’ last month, make a triumphant return to The Duchess (you can watch our exclusive video interview with the guys before the gig HERE) Playing the best of their debut album, ‘Growing Pains’, new album material and even some EP tracks for the hardcore Pile-Ups down the front-those in question sporting Dinosaur Pile-Up t-shirts and a vow to mosh at every guitar-crunching intro.

Fan favourite ‘Mona Lisa’ is haltered briefly while drummer Mike Sheils breaks his bass drum pedal, an indication of the ferocity of the band’s playing. It is an unexpected delay, one which is taken in good humour and prompts the devoted crowd to continue singing the song anyway and cue the band back in once again for the chorus- a rapturous conclusion to a haphazard start.

One thing we note, Dinosaur Pile-Up are loud. Ears ringing from one song to another (the likes of ‘My Rock N Roll’ and new track ‘Peninsula’), the Soundspheremag scribes struggle to hear one-another’s awesome words of praise as we leave the venue.

Sweltering in the heat, the dedication of this intimate crowd is a testament to the devoted following this band has begun to cultivate since their formation in 2007, and as Matt Bigland (frontman and guitarist) declares to the fans gathered: “It’s great to be in York. It’s nice to play somewhere with actual people who listen to us. It means a lot.” And of course, the crowd has only one reply…wait for it…”YORKSHIRE! YORKSHIRE! YORKSHIRE!”