Donnington Park, the spiritual home heavy metal. The place where myths and legends exist and new blood rises to join the greats in the Rock n’ Roll hall of fame. Walking on to the hollowed grounds, memories of the greats who have graced the stage come to mind, the artists now known as legends and the performances that have gone down in the history books; AC/DC, Black Sabbath, Guns N’ Roses.

No matter how many times you come to Donnington Park you can’t help but feel excited and wonder just what will develop this time, and with some of those legends returning this year, will one of these performances go down in history? 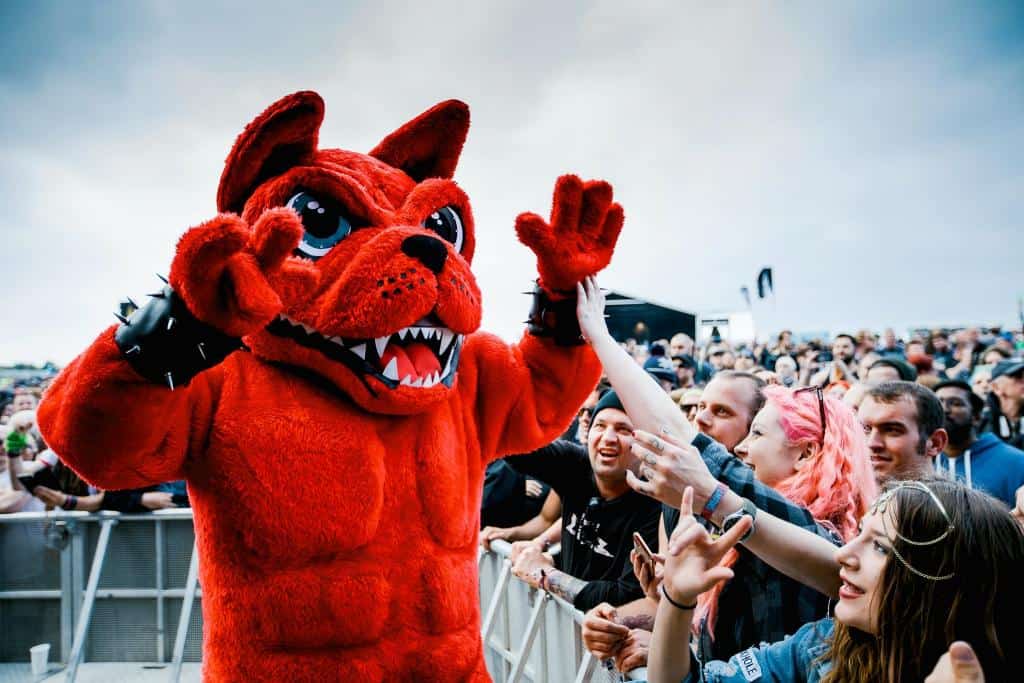 Starting the day over at the Main Stage, we see the famous platform draped in amber and red. The circus has clearly rolled in to town and the opening chords of ‘A Statue of the King’ announce the arrival of Avatar. As the chords ring out over the hallowed grounds, from the back of the stage, lead guitarist Jonas ‘Kungen’ Jarlsby, dressed in full king attire rises in his throne, towering over the band and huge crowd who have gathered to watch the spectacle. This is musical theatre at its best and the show is a non-stop visual work of art coupled with a brilliant soundtrack of catchy tracks. The self-proclaimed freaks show head bang and windmill in unison in this well-rehearsed and truly entertaining set.
Leading this masquerade of misfits we have the enigmatic and ever so deranged front man, Johannes Eckerström, dressed as you would expect in a ring leaders outfit and painted smile. His demanding presence captures the crowd’s attention instantly, “Let’s face the end of the world together” Eckerström announces as the horns rise and pits breakout. Pretty impressive considering it’s only 2pm on a drizzly, midlands afternoon.

Over on the second stage, we have San Antonio alt-rockers Nothing More. Frontman Johnny Hawkins jets accross the stage, jumping up on the the steampunk drum kit in the middle of the stage. with the industrial-esque duel drumming begins as they kick in to ‘Do You Really Want It?’ which sets the tone for the show. Highly energetic, highly entertaining, and sounding like a cross between The Mars Volta and Karnivool, they dart around the stage putting on one hell of a performance. No bells, no whistles, just great showmanship. 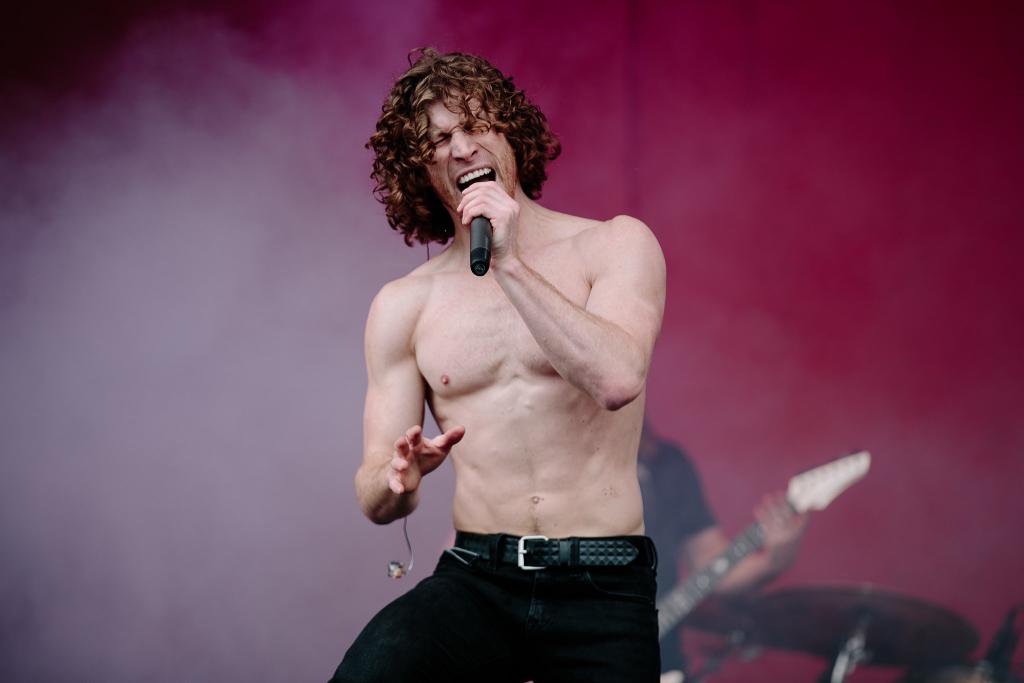 CKY arrive onstage to a rapturous applause. Almost as soon as opening track ‘Attached at the Hip’ kicks in, the pits break out. These guys have been on the scene for a long time and for most of the people here the Pennsylvanian foursome have become embedded within our own childhood and teenage years, whether that be through Jackass or Tony Hawk’s video game soundtracks. The thing is, CKY are much more than just that one song, you know the one, it goes “DUN DUN DUN DUUUN”! Delivering to the huge crowd a constant barrage of riffs, you can’t help but nod your head. As someone who maybe doesn’t know CKY’s back catalogue quite as much as their die hard fans out there, the songs sometimes seem to merge in to one and become very similar to the next but the atmosphere is infectious. “You heading to Download Festival?”, vocalist Chad I Ginsburg asks bassist Matt Deis in what they imagine to be a conversation of the typical festival goer. “Who’s playing?” replies Deis.  “Ah, loads of bands man, Guns N’ Roses, Ozzy…and CKY!”
“Who are they? I know the name!”
“They did that one song, you know, it goes DUN DUN DUN DUUUN….”
The crowd instantly finish off the rest in harmony as they break in to the classic ’96 Quite Bitter Beings’. It’s brilliant to see a band willing to poke fun at themselves.

If you have never seen an Andrew W.K show before then there is one thing you need to before we get started; this guys knows how to party! The legend himself hits the Zippo Encore Stage and breaks out into ‘The Power of Partying’. Instantly the mood and vibe changes when Andrew W.k is in the house (field). The party vibes are infectious. Joined by his full band, they bring light to what has been a fairly wet and dreary day, each one of them looking like they are having the time of their life. The lights suddenly turn red, the mood changes and the tension builds as Andrew pulls the most demonic, sinister of faces. Neck strained and eyes rolled in to the back of his head, the chords build up and up until finally the face breaks back into the smile we all know and love and the opening of “Ready to Die” starts; a song that is lyrically very dark but as you would expect from an Andrew W.K song, still feels so uplifting. “And now it is time for me to play a guitar shaped like a slice of pizza” he announces before comically shredding out a solo in true rock icon fashion before breaking into ‘she is beautiful’. When the last song comes around everyone knows what is coming but W.K decides to build the tension with a countdown, from 93!?! The crowd join in with laughter all the way down to 1 before we hear those magic words “when it’s time to party we will party hard” “This is what partying is all about” exclaims W.k, yes it is, Andy, yes it. To hear what Andrew had to say before his performance check out our chat here.

Jonathon Davis hits the Zippo Encore Stage looking like a man who means business. This isn’t the first time Download Festival has hosted Jonathon Davis without his usual brothers in Korn, but unlike last time, Davis now has a full album, ‘Black Labyrinth’ in his armory and what an album it is! This is a step away from his usual style; the heaviness is still there but it is a different kind of heavy. More atmospheric, more synth based, more refined. With a band consisting of a violinist and double bass player, Davis fires through a set with the professionalism and stage presence you would expect from someone who has been in the game as long as he has. His voice sounds just as powerful and ferocious as normal but with music that is this atmospheric, without the over heavy guitars and at times, even feeling middle eastern, it sounds even more ferocious. “Let yourself go” Davis tells the crowd, who seem to be lacking in size slightly, possibly due to Volbeat playing on the main stage. The show is overall is darker, more mature and refined but I feel it would be unfair to compare to Korn or a Korn performance. This is very different and it is beautiful. Even finding the time to play a song from the Queen of the Damned Soundtrack, Davis fires through a brilliant set leaving me wanting more. 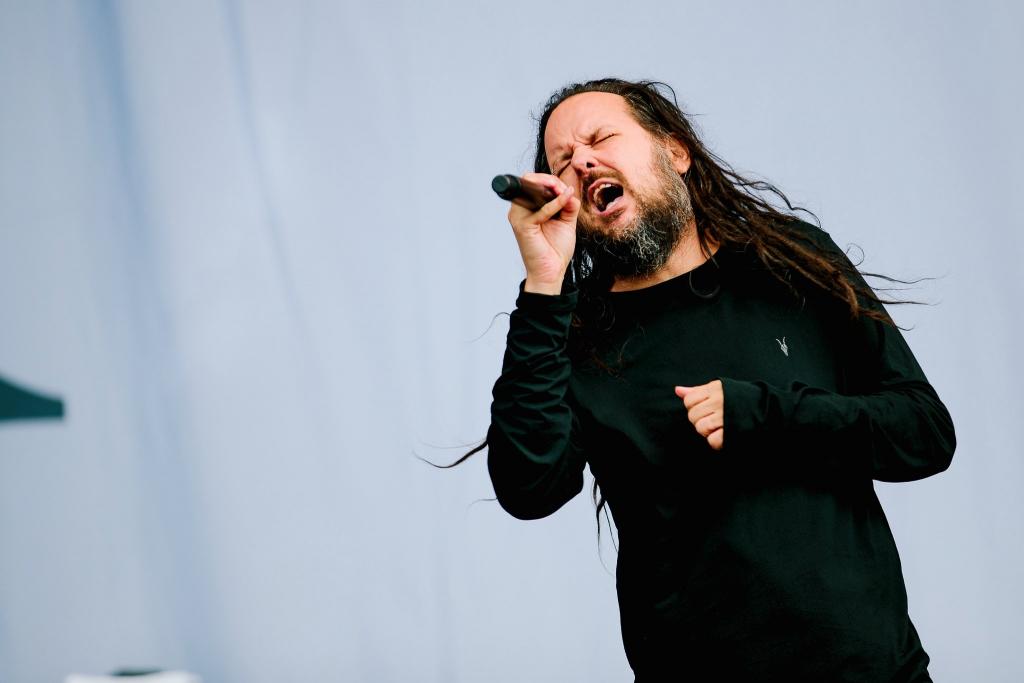 As the early evening starts to set in, Danish rockers Volbeat make their way onto the main stage with their mix of rockabilly and metal. From the off, Michael Poulsen’s voice is in top form, as the band rattles through a blistering set of crowd favourites including ‘The Devil’s Bleeding Crown’, ‘16 Dollars’, and ‘Still Counting’. There’s even time for a brief snippet of Johnny Cash, and a not-so-secret appearance from Mark ‘Barney’ Greenway on ‘Evelyn’ (given Napalm Death’s billing on the Dogtooth Stage later that night). Based on tonight’s performance, surely it’s only a matter of time before Volbeat get a headline slot at a UK festival.* 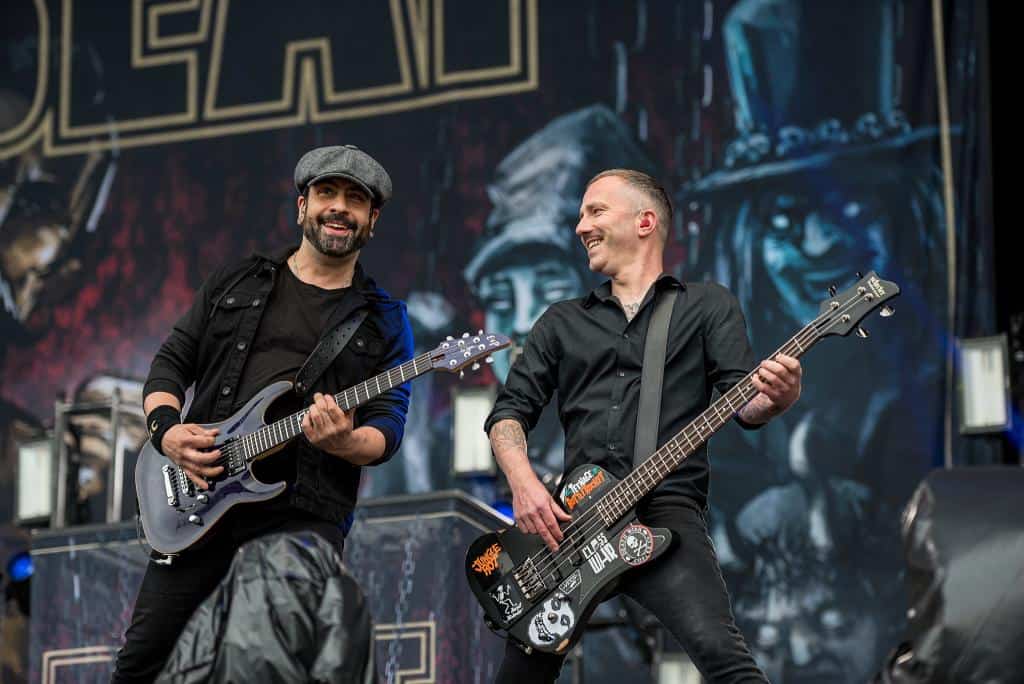 I’m an old school kind of guy when it comes to journalism. I prefer to walk around with a notepad and pen when reviewing bands. So, after heading over to the Dogtooth Stage to catch one of the bands I was most looking forward to all weekend, the only words wrote on my pad after the set was “HELL YES”. After all, I didn’t need to make notes of something that memorable. If you have never heard of Igorrr before and you like things on the darker side then go listen to them right now, seriously, I’ll wait here.

See what I mean? Igorrr are unlike any band I had seen or heard before. Solo project of Gautier Serre, as a friend perfectly summed up, they are an “Absolute assault on the senses!”. Imagine mixing Industrial with Death Metal, Black Metal, Drum n’ Bass, Classical and the final result actually working, it’s mind blowing. I’m a bit of a fan, can you tell? Probably the only band not to feature a live guitarist over the weekend, instead Serre handles all instruments except drums and vocals through the power of magic, or a laptop and decks, I’m unsure. Vocals are handled by Laurent Lunoir and Laure Le Prunenec. Prunenec darts across the stage looking like a deranged ballerina whilst delivering flawless operatic vocals and Lunoir, dressed in corpse paint sucker punches you with demonic growls and screams. I couldn’t imagine this feeling the same on an open air stage, but within this tent the gathering of loyal fans love every second. 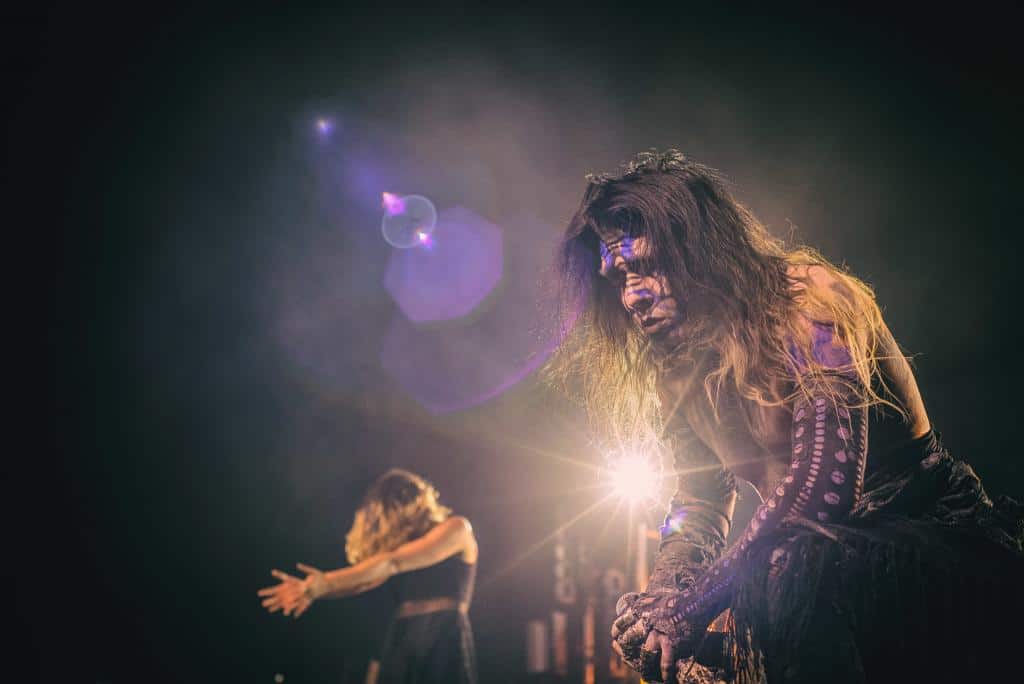 Tonight, Tesseract are spectacular. Truly spectacular. I could leave it at that but I will go on. Tonight Tesseract headline the Dogtooth stage, and deservedly so. This is a band who have constantly impressed, either through incredible song writing, flawless musicianship and impeccable albums or through their spectaular live performances and have gone from strength to strength. Last time Tesseract performed at Download Festival they played in the open air on the Zippo Encore Stage, but the atmosphere they create through their music deserves a light show and definitely a headline slot. Apparently, everyone else must think so too as, despite getting to the tent early, it is a struggle to squeeze in. It is packed! Opening the set with their newest single ‘Luminary’ the guys instantly deliver that reconcilable sound. Vocalist Dan Tompkins is in fine voice. A voice that has been tuned, refined and perfected in a relatively short space of time. It’s a great feat for any band to be headlining a stage at Donnington Park but a for a homegrown band that has really earned their way here through years of solid releases, it feels extra special and it is a headline slot well deserved. The band tear through a set of the old and newer songs from their latest release, Sonder. Songs like double header ‘Deception’ and ‘The Impossible’, parts two and three of the ‘Concealing fate’ concept album sound just as fresh and powerful as when they were released. Tompkins own the stage and the barrier, regularly getting up close and personal with the front line of die-hard fans. The crowd bellow every word back at the band and it is clear Tesseract are loving every second of this show. The light show gives the show an otherworldly feel and at times it made me feel like I was actually hearing the sound of the Aurora Borealis. To hear what Dan Tompkins had to say ahead of his headline slot, click here.

Tesseract are the perfect crescendo to a brilliant first day at Download Festival 2018. Let’s do it all again tomorrow, yeah?

All words by Benjamin Gladstone except *
*Words by Scott Cardwell