Wednesday’s experience cannot be expressed only with words. We’ll need some pretty explicit pictures to get the message across fully. Unfortunately that’s not gonna happen, due to various degrees of discomfort. So words it is. 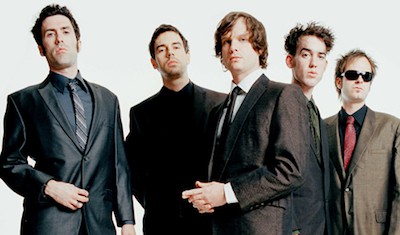 The night kicks off with a sparkling performance from The Blueprints, who lull the audience into transfixion with their melodies and combo of guitars, keyboards and harmonised vocals. The York band are a new discovery for this listener – yes, the shame of it, being a resident of the city and not knowing one of the locals! – and a fine one at that. Then Andy D and his disturbing moustache take the stage. Three words – What the f*cking hell is going on here? Yes, that’s eight, we’re aware. But here’s the thing, every three word action this guy does on stage deserves five more, the majority of which will doubtlessly be curses of amazement. He’s certainly very fond of one three word phrase in particular: “I love you”, which he repeats after saying things like “That was amazing”, or “This song’s gonna suck”. This is, without a shadow of a doubt, the most entertaining performance of the night, in a showbiz way. His energy is unmitigated, and the songs…well, they’re questionable, but pretty fun. Don’t try and take this act seriously or your head will definitely explode. No, that’s not a metaphor.

Then comes the moment we’ve all been waiting for. The moment when Dick Valentine steps up to the mic and tears the venue down (that one was a metaphor, otherwise there’d be a considerable amount of legal ramifications to shoehorn in) with the opening of the new album ‘Mustang’ (read our review here) ‘Nom de Plume’. It’s great to see the crowds getting familiar with it, with the majority of the Fronters (The guys who clamber to the forefront. Yeah, we coined that. Clever eh? No? Guess you’re right. Where’s the noose?) singing along. Then comes two more tracks. Dick refers to these three collectively as “The worst tracks on the set” before launching into the next which he sentimentally declares as being “off one of the albums”. The entire room lights up for ‘Gay Bar’, and then it calms down again  for more ‘Mustang’ tracks; ‘Show Me What Your Lights Mean’ and later, our personal highlight of the night, ‘Adam Levine’. The final song sees us crouching on the floor, tactically resting for the climax of the evening, when the true moshing begins. And then, who’d have thought it, an encore of ‘Dance Commander’ that has the room screaming. All in all, a wonderful night that solidifies this writer’s fandom for Electric Six. When they come to your neck of the woods, do not miss them.