“Scarborough has never seen anything quite like this. Not since the Vikings rocked up will there be such a ruckus in the South Bay,” says Mr H, alias Tim Hornsby. Quite right, good man. 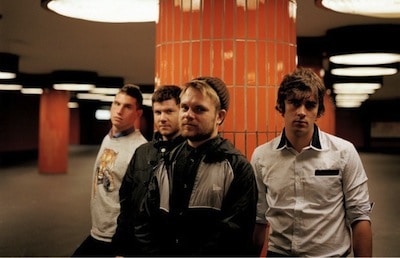 Shikari lay waste to Scarborough tonight. Before that though, The first artist on is new UK alternative hopefuls Baby Godzilla; despite their best efforts and some frighteningly energetic stage moves (good on you, guys), the fans here don’t seem too impressed, and the bar is suddenly rammed. Shame! Hacktivist are next up though, and their DJent blend of technical metal works wonders with the onlookers here. A particular favourite (of course), is the group’s cover of Jay Z and Kanye’s ‘Ni**as in Paris‘ which reverberates around the massive space. It’s great to see this young band thrive in such an environment.

When Enter Shikari take to the stage, ‘Gandhi Mate, Gandhi’ is the standout, and delightfully, everyone is drenched in each other’s sweat but they love every minute of it. With this song, there’s so much anticipation for vocalist Rou Reynolds’ rousing speech, and as he begins to screech his words of infinite wisdom, the crowd builds intense amounts of aggression before letting rip and nearly tearing the roof off the criminally under-used gig space that is Scarborough Spa and the Ocean Room.

Real props must go to the crowd who are incredibly supportive through the entire show tonight; the atmosphere has been incredible and the audience did Scarborough very proud!