2003 was a great year for British rock music and at the forefront of the scene were Funeral For A Friend. Back then, the Welshmen were troubling the charts with their masterful take on post-hardcore, before their formula was plagiarised by countless others. 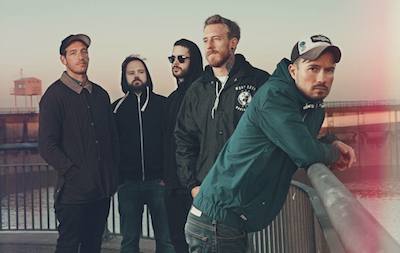 [like_to_read][/like_to_read]
FFAF were leaders in British rock music back then and they continue to be today, overcoming the challenges of lineup changes to remain a force in UK rock music. They may not be in the top ten anymore, but their longevity is indisputable. Bands they influenced and guided (The Blackout, Kids In Glass Houses) have lost momentum and broken up, though there is no stopping the defiant boyos from the valleys.
While Leeds’ Mine venue certainly isn’t the largest venue Funeral For A Friend have played, it’s impossible not to notice the unquestionable enthusiasm and energy they release on stage. They’re up for tonight and it shows. Back on tour to support their latest album ‘Chapter and Verse’, tonight’s set sees newer tracks interspersed with exceptional renditions of old classics, including rare performances of ‘Storytelling’ and ‘Bend Your Arms To Look Like Wings’. The album only came out this month, but the passionate sing-alongs for ‘1%’ and ‘You’ve Got A Bad Case of the Religions’ highlight that no one is here just for the oldies.
An issue with the lights means that vocalist Matthew Davies-Kreye can only see one person in the near-full crowd. However, the charismatic frontman takes the problem in his stride by cracking countless jokes and inviting the gig goer to crowd surf from the back of the room to the front.
Funeral For A Friend have remained relevant because they love what they do. ‘Recovery’ is played with the same bite and aggression that wowed crowds in 2005 and the impassioned rendition of ‘History’ will guarantee sore throats in the morning. ‘Roses For The Dead’ closes the gig as Davies-Kreye leaps into the crowd to be greeted by a swarm of high-fives, notching up another successful night for the post-hardcore stalwarts.

Funeral For A Friendmine leeds