Three days of craft beer, seven stages (plus even more performance spaces), and festival entertainment, all set in the grounds of a stately home? Must be Galtres Parklands Festival. 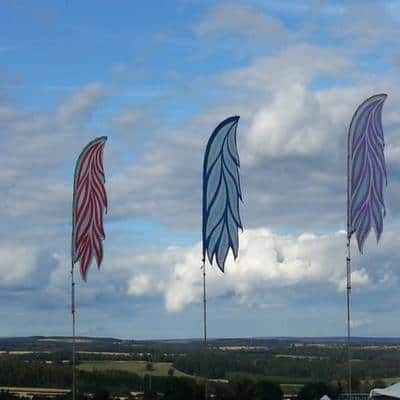 Celebrating ten years, Galtres has become a regular fixture in the festival calendar – and Soundsphere are particularly chuffed to be curating the #GALTRESROCKS stage on Sunday. Before that though, there is plenty to be seen, heard and done. Friday, after a bit of confusion getting in, the tent is pitched and the bass of the Black Howl stage lures Soundsphere across. Today it’s the BBC Introducing stage, with radio presenter Jericho Keys compering a great range of local acts to kick off the festival.

York psychedelic band, Psycle, pump out their sweeping sounds to start the stage with a flourish. Thick bass rolls alongside spoken vocals and a technically well-played overblown flute to create a laid-back chilled atmosphere. The meandering songs seem to have no real arc, however, and the tangibility of the psychedelic atmosphere feels just out of reach – it’s less meat, more tofu, and the new listener is alienated from a very niche genre. However, a dedicated crowd is swaying at the front, and the technical ability of the band is enough to make the set enjoyable.

Hot-footing it over to the Duke Stage, Soundsphere manages to catch The Talks for an altogether different experience. Ska reggae belts out of the speakers to rumble the very clothes of those standing close to the stage. Goose-toned saxophone reels alongside the effortless guitars, and a special note must be made for the bassist’s ability to skank and continue to play in time to drive tracks along. A high energy, enthusiastic and infectious performance, The Talks deliver a sunny set that boosts the mood and really gets the party going.

Feeling spoilt for psychedelic choice, it’s back to the Black Howl and BBC Introducing stage for a set by La Petite Mort. Avoiding the oft-encountered self-indulgent trap of the psychedelic genre, there is enough structure in the soundscapes to feel that the polyphonic tones are coming from within the listener, instead of being pushed upon them. La Petite Mort creates a trippy experience without the need for mind-altering substances, as well-managed noise pervades a chilled vibe.

Staying in the Black Howl, …And The Hangnails deliver a flawless set: the  alt-punk garage rock wall-of-sound duo draws a large and engaged crowd who sing along and dance with ground-driven heels to the dirtiest riffs and devilish licks. The atmosphere doesn’t just crank up a gear: it ratchets up an entire steampunk invention complete with extra cogs, grinding metal, and excessive thermogenic energy. Drummer Steven Reid breaks countless drumsticks, while guitarist and vocalist Martyn Fillingham belts out tracks capable of defining an era.

Later on, once the dodgems and waltzers have been dodged and waltzed, Soundsphere sits in the relaxed Ryedale Arts Bar tent, to find Amy Greene And The Charm Offensive delivering exactly what you’d expect: cute, charming upbeat folky tunes which fit perfectly with the sofa-bound, lampshade-lit setting. Following on, The Cover Lovers let rip with covers of classic party tracks, and the lure of the beat becomes too much: the entire tent gets up to the front of the small stage in a rhythmically-challenged, stompingly good fun dance session. Kudos in particular to guitarist Oli on the cover of Michael Jackson’s Bad – that solo: ear-rippingly great. 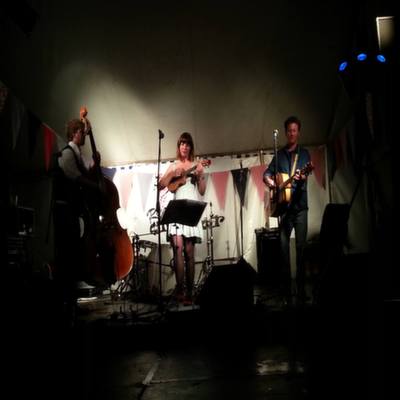 Amy Greene and the Charm Offensive

With the smell of morning bacon fresh in the nostrils and the sun beaming down from a mostly-blue sky, not much could improve the scene. Except, perhaps, the self-deprecating ska-reggae sounds of new band, Bud Sugar, filtering across from the Oxman stage and pulling in the (hungover) early risers for a happy-go-lucky, bouncy sound to ready the day. Alas, the weather has different ideas, as the sky cracks and the first rain of the day falls during their set, but the staunch Brit-‘tude of the audience means it’s ponchos out and brollies up instead of ducking for cover at one of the tent stages.

Rain still coming down, the next set is at the second outdoor stage, the Duke, for The Birdman Rallies. As tracks go on, the sun agrees with the music and comes out to play again, helping boost the energy of the soggy audience in the mixed-genre set reminiscent of ELO having swallowed Bastille in a hungry gulp, washed down with a swig of Supertramp spiked with London Grammar.

The appeal of a cup of tea and comfy seat draws Soundsphere back to the Ryedale Arts Bar, where the end of Fake Thackery’s comedy acoustic set is just about winding up. People are sitting on slouchy chairs and sprawled on carpets across the floor, laughing along with the quick-wit of fast lyrics in this Jake Thackery tribute.

Pulling out all the stops later on the Duke Stage, The Jim Jones Revue don’t drip sweat but pure essence of swagger as their classic blues rock sound sets souls alight. The rain means nothing to this crowd, who are dancing and jigging along as the insane piano solos are beaten only by the raspy, rugged vocals. A real shame that this band is coming to an end in October, the audience here knows this is a special moment and they make the most of it, swinging limbs and swigging from kegs through the romping set.

Dealing with the comedown of such an energetic outburst, the Black Howl tempts with The Rose Code Trio – a band who are performing as a trio for the very first time right here at Galtres. It must be said that they feel incredibly well rehearsed and put together, with the folk sounds a bit like a laid-back Mumford and Sons (and far, far less annoying). Some unusual techniques, such as playing the guitar across the lap while using a metal slide, mean the slight bluegrass undertones to tracks lift the sound away from classic folk and make it new.

Skylark Songs are up next, a folk duo complete with guitar, fiddle and well-harmonized vocals. There is a purity of tone to both voices, which beg for just a little more depth in order to feel gutsy enough to hold attention for a full set.

Today is our day. Today, Soundsphere brings all the rock to Galtres in the imaginatively titled GALTRESROCKS takeover of the Oxman stage. And man, is the excitement tangible. The Buccaneers begin the Soundsphere takeover, their harmonized blues rock perfect for a lazy Sunday morning start. Their Elvis cover of ‘Hound Dog/Tutti Frutti’ is a ballsy finish that rounds off a truly solid set of class guitar skills and rippled vocals.

Following on are Hull band, The Black Delta Movement. Another psychedelic offering, these guys bring more rock and less ambling melodies as seen earlier in the festival. Grinding basslines push forward under quietly competent guitars and forthright vocals from lead singer Matt Burr. The audience grows across the set, as deep beats and trippy loops swirl a host of influences into solid songs.

As the afternoon haze takes hold, Bull take over the stage, in every sense of the word, with an additional guitarist in James Barton and even violinist Michael Simison for a few songs, too. Their self-deprecating, chaotic style brings a unique energy to the scene, with their 90s American indie-pop inspired tracks bobbing along at great pace. Soundsphere are particularly impressed with youngest member Dan’s harmonised vocals, which have hugely improved in recent months. Bull never fail to deliver a bright, happy, silly set full of high jinx and japes – but beneath the fun exterior lies a solid talent for good songwriting, technical aptitude and tracks that catch at hearts to lift them towards sunny, nostalgic climes.

Keeping the energy at top level, Counting Coins take on the next slot, and their ska-punk-gypsy-hip hop style draws a bigger crowd than even the main stage. Bouncing effortlessly around the stage, they deliver track after track of golden ska, and the audience loves it. Skanking amongst the haybales, the feedback loop of the energy on stage driving the energy in the crowd just gets bigger and bigger as the set goes on. At the end, the demand for an encore is so strong they actually return for a final song – the only time Soundsphere sees this happen all weekend.

The polar opposite to ska sets the Oxman stage alight later on, with Pantheon delivering hot metal tones and some ridiculously impressive hair to the fore. Pentatonic harmonies pay homage to old-school metal, and some tricky licks riff out of all three guitars to create a healthy assault on the ears of the audience. 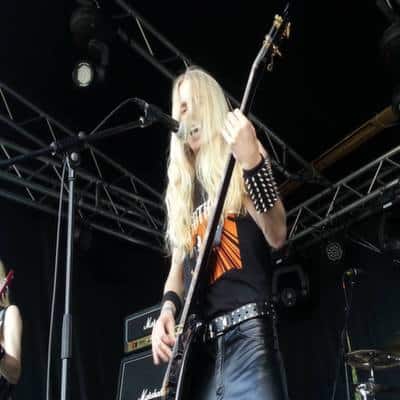 Si (or Matt, one of the twins…) from Pantheon doing his rock-haired thing

The noise levels are once more upped with the presence of ((RSJ)), bringing raw noise and monkey-style stage climbing antics for a full-on performance that could be heard across the rolling Dales for miles. Local sheep have an education in what makes good hardcore sound, that’s for sure. Their education doesn’t stop there either, with the next set being theatrical showmen, A Joker’s Rage. With painted faces and a level of exaggeration bordering on excess, their catchy alt-metal tracks have the audience bouncing along. A finale cover of ‘California Love’, inclusive of facepainted AJR supporters joining at the front of the stage, tops off the most dramatic set of Galtres 2014. 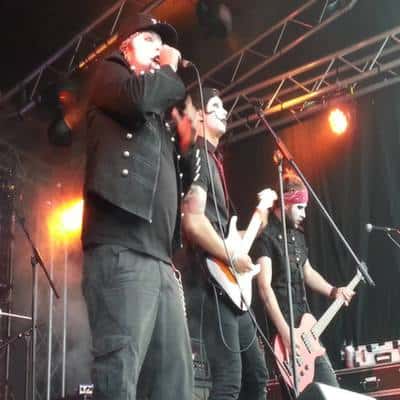 A Joker’s Rage take to the Oxman Stage

A short break later, Soundsphere is standing by a fire pit – not to keep warm, but to witness the poor souls tricked into a charity firewalk. Walkers include members of The Littlemores, …And The Hangnails, and Bull, plus several more idiots brave and thick-skinned individuals.

With our faces melted off and new heroes set firmly in our minds, it’s back to the Oxman for legends The Virginmarys, and later on, Rosie. The VMs give us the biggest crowd at the rock stage, and their anthemic Foos-inspired power-pop is just what the alternative music lovers of Galtres have ordered. Last but not least, the aforementioned Rosie bring the party with their closing #GALTRESROCKS set! Like Does It Offend You, Yeah? before them, this band mix wit and bouncing electro-rock rhythms to great effect. Fantastic stuff, and a great way to end a Sunday, if we do say so ourselves.

Galtres Parklands Festival is very much a family affair, with plenty to do regardless of how old you are. Whether it’s walking the plank at the Galleon Stage or sampling the finest craft ales, there is a great deal of entertainment all around. But the thing that sticks out the most is the sheer variety of the music on offer, as well as the camaraderie of the performers. Bands turn out in force to support each other, and regular attendees on the Yorkshire music scene clearly make the effort to get to each set of their favourite bands. This local community atmosphere is what makes Galtres unique: a relaxed and supportive vibe reflects what makes the Yorkshire music scene such a positive place for musicians and music lovers alike.