A couple of weeks ago, we went over to the fantastic Brudenell Social Club venue to see an all day event mixing up genres in such a way as we’ve rarely seen. Yeah. We know the review’s late, but it does deserve to be published. The quality on offer on this day/night was pretty brilliant. This entire review will be in past tense (as with all our late reviews…still waiting on Slam Dunk 2013 actually – should probably get on that), because it was aaaages ago, and should have been up before now. Apologies. We can’t be awesome all the time. 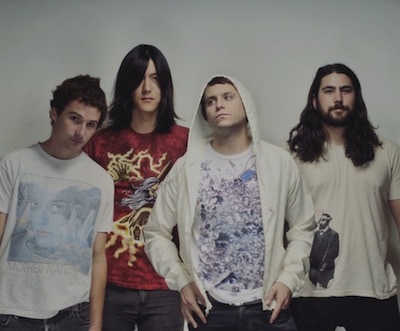 On to the action then, and we get introduced to Bloom, a band that put together some very pleasing and tasteful shoegaze-tinged rock, that sets the tone for a great mixed bag of sounds. On a similar note, after arriving back from a suitably filling pub lunch we catch Swimming Lessons, whose mastermind Ben Lewis is fast becoming a Yorkshire music legend in his own right due to a great work ethic and intelligent writing. He crafts some evocative and challenging waves of sound that would fit most bills within the alt-indie scene – subtle electronic beats run over some impressive guitar work for cracking results.

Following up, we had the pleasure of exploring the now globally recognised From The Kites Of San Quentin. This Manchester-based three-piece create a quite ethereal sound, and while it seems confused in parts (the seductive vocal tones sometimes clash too greatly with the pace of the electronic beats in the live arena), the overall impact is satisfying, and on record the band seems to have everything together. Indeed Alison Carney has some of the best vocals we’ve heard in recent memory, and the spacey backing sounds on their own are nearly always hypnotic. One thing we wonder though, as this band are clearly unafraid of experimentation, what could live drums do to take the show to the next level?

Next up though, we had our surprise of the night, and if we weren’t anticipating HEALTH’s set so much, they would’ve stolen the show. Two Trick Horse are insanely good, let’s just get that right out there. Mixing up the intensity of early Queens Of The Stone Age-meets-At The Drive-In-meets…err, Reuben. Ahh man, it’s just really good, ‘kay? One of the best bands we’ll see all year for sure. So impressed – brilliant breakdowns, fantastic stage presence and anthemic tunes. Win. Keep up the awesome work lads.

Another wonderful new discovery for our fine selves (Paul Faller was in attendance on our behalf too…so, that last statement works…he’s got mint hair) was Weird Era. This quirky Manchvegas (Manchester) lot have some brilliant well-crafted tunes that pull a sizeable crowd tonight; it’s the type of spacey-grungey-alt-rock-MBV-meets-Pixies-meets-Swervedriver that we really like. There’s no pretence here, just good musicianship and obvious drive. This band has a lot to be proud of, and if they keep getting on bills like this, they should be on bigger tours in no time.

Due to Visa/Passport and general travel issues, we were pretty sad that Doldrums couldn’t make this one, as their sound makes us particularly happy. Here’s some songs by them, so you can hear what they do if you haven’t already…

And what of HEALTH? Well, it’s just f*****g noise isn’t it? Good bloody noise though. From start to finish on this night (bar some lengthy sound issues) the US band destroy our ears with their raw and ferocious electro-powered lashings. The singles, ‘USA Boys’ and ‘We Are Water’ provide the crowd with some dance-fodder and tracks like ‘Death +’ (with its breakbeat drums – we love the dual drums by the way…more bands should do this! Drums everywhere!) are equally as appealing and energy-fuelled. All in all, this was one trippy set, and that is of course the way this band likes it. We’d have loved to see this band on a bigger stage with the likes of NIN though, as a showcase of this intensity (arguably) is best appreciated on a bigger stage. If you get a chance to see this lot at a festival or something, be prepared to have your lobes blown, and be prepared to like it. After the success of the Max Payne 3 soundtrack last year, we cannot wait to see what the band comes up with next.

We did actually interview the band last year, so we’ll leave that here…