There is always that one person at any gig, wearing a token tour t-shirt of a band they saw back in their glory days, who cannot contain themselves from going nuts with the head-bopping. That hypothesis is surprisingly met here. 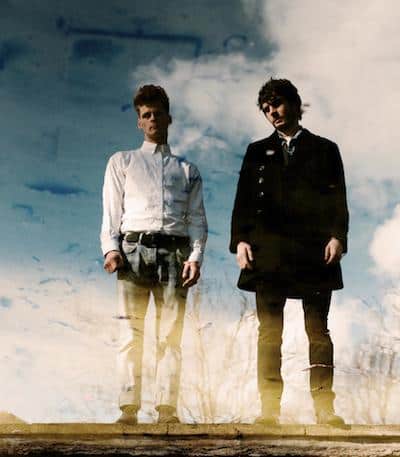 Listening to the pop-folk brothers on record, for them to evoke such body jerks is not expected. Hudson Taylor show the audience at The Wardrobe that, when teamed with a band and explosive energy, their live performances are a whole different experience. Harry and Alfie Hudson-Taylor from Dublin have only released three EPs but by gathering a following through festival performances and general hearsay, they have secured their first headline tour. The tour brings them to the small venue of The Wardrobe, which Harry compares to Narnia – a joke the venue surely is all too familiar with.

However, The Wardrobe can’t be more ideal for an intimate performance. “We are going to do this one on our own,” Alfie said as their band, consisting of the drummer, pianist and violinist and extra guitarist, leave the stage. They even sing the mellow ‘Left Alone’ without the microphones,  while the audience sing-along ever so softly not to sing over them. On the other end of the scale, The Wardrobe is so intimate that perhaps the boys can feel the energy of the crowd and vice-versa while playing the faster stomping tracks. Of the duo, Alfie is the belter; the one who is a force not to be reckoned with when a tambourine is in his hand or while vigorously strumming the acoustic guitar. He simply gives it his all and the crowd responds. Harry keeps it cool by providing the perfect harmonies and the other half of the acoustic melodies. He takes a humble approach to the audience’s cheers by sweetly saying “thank you” like a young polite child might say to their grandma after receiving sweets.

Meanwhile in the crowd, t-shirt guy was bopping. Fighting the urge to let go entirely becomes more difficult with each strum-happy song such as ‘Chasing Rubies’, ‘Drop Of Smoke’ and ‘Care’. As they announce their last song (the first time – you know how the encore works), a lad shouts: “It better be ‘Battles’ then!” All in good time, oh eager one, for the song that reached #1 on iTunes Ireland and #14 on UK, is the penultimate song. With the backing of the band, there is that extra oomph to the performance. For example, full advantage is taken of violinist, Tadhg Walsh-Peelo, for the finale with the sounds of an Irish jig storm. By this time, everyone has joined in with t-shirt guy. With a whole host of new songs on the set-list, including a lovely number dedicated to their sister, Holly, to which they receive a chorus of “awwws”, there is a lot more to come from Hudson Taylor, and we’ll look forward to seeing them (and another adoring crowd) in Leeds soon.