Leeds Festival, the place where dreams are made. Sort of. Ahh, it’s all good. I love it at Leeds – everything’s accessible, and chants of Yorkshire! Yorkshire! can be heard from miles around… 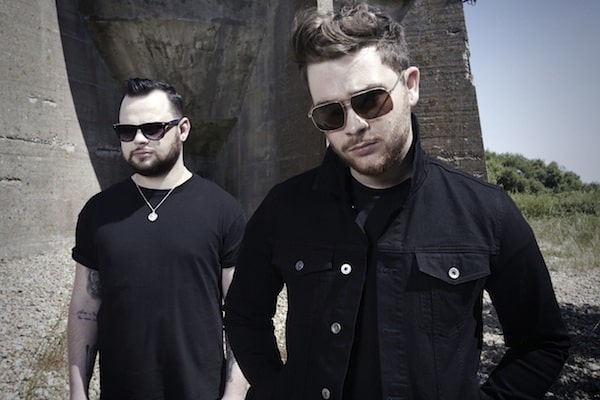 Today is an excellent day, we start off with the mega Hawk Eyes, who smash through the early-ish doors with their powerful and passionate efforts. These dudes are (of course) Leeds natives, and the crowd are certainly enjoying a damn good thrash about to the sounds of pure…stunning riff-tastic chaos.

Next up, we’ve got the quality rock sounds of LA’s Queen Kwong (featuring, of course, Limp Bizkit’s Wes Borland, and ex-Marilyn Manson member Fred Sablan), despite a couple of sound issues, Kwong put on an excellent showcase, and work hard to entertain their audience throughout. They’ll be earning their stripes through solid sweaty live shows from now on, and pushing beyond any great pre-conceptions (that come with having notable members) if they keep performing like this; it’s not nu-metal or alternative metal, it’s just good, yo.

Leeds/Harrogate native Skinner is our next choice for today (over on Introducing), her decadent electro-pop stylings make her recent Anonymous Records signing all the more important…and clever. This girl, and her fantastic live band are capable of taking the world by storm in 2016. A proper quality performance all round.

Mixing it up next, we leg it over to the pit to catch the rather awesome Bury Tomorrow and their ferocious, un-relenting (but entirely uplifting) set that works to motivate and inspire us…to mosh our fucking socks off. What a mint first introduction to this band on a live level.

Frank Iero and his Cellabration are up next for us, again on the pit stage. We love Frank, his near-perfect mix of pop sensibility and raw punk melody just works for us, and also for the legions of teenage MCR fans just waiting to errr…see/touch their idol.

Bulldozing us directly following good ol’ Frank are the Cancer Bats – who wow with their (incredibly popular) Southern/stoner rock vibes – they are just as good as everyone says they are, and you should definitely, most emphatically see this band before you die.

While She Sleeps follow-up (and yes, we’re still in the pit), and they just smash everything…well, not literally, but it’s delightfully noisey, loud and very well done metalcore, to the…core. Oh, yeah, the band are from Sheffield too (as if you didn’t know), and that just makes them that little bit cooler in the eyes of the defiantly Yorkshire Soundsphere magazine team. Sleeps have a great reputation among alternative music fans, and they’ve proved here, that they’re worth every bit of it. Good on you, lads.

Neeeeeext, it’s the legends house of Leeds Festival (yes, we’re still in the pit), as the almighty Refused take to the stage. This is an alternative punk music masterclass, ladies and germs. See Refused, and they will change your fuckin’ life; the new album slays, the performance rules – at one point, vocalist Dennis Lyxzén actually stands on the crowd. Get off your arses, and see this band. Refused are true alt-icons and as they run through the likes of ‘Refused Are Fucking Dead’ and ‘New Noise’, it’s clear to see just how much impact this band can still have on a global scale.

This one starts a little later than planned for us, though we manage to catch the ever-epic and completely cool God Damn. They’re so mint. Oh, sorry we’re gushing a little. While Royal Blood might be really awesome, God Damn are the best two piece band in the UK right now, there, we said it – what are you going to do about it? This band are just something else live, and of all the acts we say that about in this review, God Damn are the ones you should be paying the most attention to, without doubt or question.

Moving over to Introducing, we catch most of Hull indie rock standouts Life who are blazing a trail as standouts for East Yorkshire’s music scene with their geek-punk approach to music making; definitely worth a look-see if you think Hull is just about The Beautiful South – Life are on another level, completely.

Oh, Andrew O’Neill you funny, funny bugger. Over on the alternative stage, the man takes us through his history of metal; covering everything from Metallica to Iron Maiden and Korn, the leather clad comedian and his thoroughly entertaining band provide one of, if not the most entertaining spectacles of this weekend. The crowdsurfing (while Andrew comperes for the following act) was also pretty damn cool. Respect.

Back at our favourite haunt The Lock Up / Pit stage, we check out the anthemic pop-punk of The Menzingers – many an uplifting tune is gifted to us, and the band’s dedicated fanbase know all the words…which, you know is a good thing. ‘I Don’t Wanna Be An Asshole’ anymore stands out as a highlight, and a testament to just how good this band are at tapping into raw emotion to delight a crowd.

Over to that there NME stage now for a bit of PEACE, and well…the less said about them the better, really. A little bit jingly, a little bit jangly and…some good dress sense. Yeah, that’ll do it. Immediately following we get RUN THE JEWELS (caps because this writer was most excited about this band, for sure).

While Killer Mike and EL-P could definitely do with some additional instruments on stage (maybe some guitar and live drums, we dunno?), the atmosphere is certainly positive for RTJ’s first time at Leeds. ‘Blockbuster Night…’ comes across well, despite a few problems re sound, and the whole set gets the crowd pumped. The only issue is sometimes Mike and EL interrupt each other during verses at times, which we get is a challenge to not do, but it’d be nice to get each verse clearer with maybe Killer Mike taking the predominant vocal role as on the records, would certainly add to the impact. Man, that sounded pretty formal, didn’t it. Bollocks. There.

Next up it’s the BIZKIT baby, yeah! If only we could flllly! Ah you know the deal. This is just good ol’fashioned rap metal…in the NME tent (whuuut?). Anyhoo, the classics are all here, ‘Rollin”, ‘My Generation’ and ‘Shotgun’ all serve to wow the over-capacity crowd, and Fred Durst seems to be on fine form, with the rest of the group seemingly enjoying everything about their 2015 life together. Here’s hoping for a new album in the next five years then, eh, boys? Believe us, Limp Bizkit are a band for your bucket list, whatever you’re into. We hope to see ’em a few more times before they call it quits, for sure. Real nostaglia, true power.

Ohhhh man, it’s Sunday, and things are getting serious……errr….no. Not really. We’re back, and for the very first time this weekend, we’re over on the main stage for a little bit of classic alternative music with Alexisonfire; these boys have recently returned from a lengthy hiatus, and it’s good to see ’em again. ‘Boiled Frogs’ and ‘Young Cardinals’ are the major talking points of this set, oh, and vocalist George Pettit taking a ride on a dingy in the crowd – that’s pretty cool, isn’t it? Yeah. Yeah, it is.

So…then, it’s Royal Blood time. What do we make of the world’s new buzz band? Utterly brilliant, and no we’re not just saying that are we? They really are that good, maybe there’s a little bit of ego there these days, but it certainly adds to the performance. ‘Out Of The Black’ belts out, and proves in a few minutes just how valuable RB are to the UK’s music scene. These songs (they go through their entire debut) are brooding, and strong. We predict that Royal Blood will experience a similar global rise to The White Stripes, and more specfically Muse – stadiums beckon these boys, and we expect a legion of two-piece bands to emerge over the coming years too. Royal Blood will inspire more people to make simpler, more direct rock music, and that’s no bad thing. What a showing. What a damn show – they’re just as good as all the hype claims them to be. And you know what, they (absolutely) deserve it.

Bring Me The Horizon see us stay on the main stage for a bunch of (not so) Happy Songs and a lot of (good noise). There’s something very special about BMTH, they’ve just got that appeal that means that they can bridge serious gaps between the hardest alternative and metal music and the mainstream.

Tracks like ‘Sempiternal’ are so intense, but it’s definitely the passion that is Olli Sykes’ saving grace, while his band pour their bleeding hearts into instruments, Ol is leaving his soul out there for all of Leeds to see. This band are doing great things for rock and metal in 2015, and they may be the ambassadors of the movement for the next ten years. ‘Throne’ which emerges from the band’s forthcoming album (‘That’s The Spirit’), out this month, really shows how far the band have come and how much they can achieve going forward. This band have started a revolution in the OOs for metal, and everyone seems to be getting on-board with it.

A quick nip back to our favourite spot (The Pit/Lock-Up), and there we find Ghost, who are definitely one of the more interesting metal bands of the entire weekend. Taking ghoulish (and quite creepy) imagery and mixing it with good humour and a sterling live performance is Ghost (sometimes styled as Ghost B.C, FYI) – certainly one of the more genuine, and entertaining all-round entertainers at this festival; tracks like ‘If You Have Ghosts’ (originally by Roky Erickson), and ‘Secular Haze’ are incredibly well put together, and the whole gimmick of vocalist Papa Emeritus III controlling his Nameless Ghouls is very well received. You’ll never see anything like this, gals and dudes. Well worth your the fuss.

Annd so, we’re going to see Metallica now, right? Nope. Heading over to the 1Xtra tent we go and see Azealia Banks who, with live drums, a DJ and some killer lyrics absolutely smashes our expectations. Live, this girl is less hip-hop superstar, and just a tad more “punk”, and for the people on this occasion. Honest, and it’s very cool.

Yeah, yeah. We’re going, we’re going to see Metallica for a bit. We catch the classics ‘Enter Sandman’ and that mint Lizzy cover, ‘Whiskey In The Jar’, and to be fair it is pretty mint. You have to see ’em really, don’t you? They seem on fine form, and to be enjoying their night (though, there’s a tonne of pomoposity here from each of the members [Lars!], but it’s ‘tallica so what do you expect?). Still, if you’ve not seen ’em, you probably should. As….well, not many do metal better (or with more swagger) than this lot.

Anyway, that’s it! Thanks for having us back