It is a moment this sweaty bunch of nostalgic Bizkids have waited for all night. You know? That bit in ‘My Generation’.“Do you think we can fly? Well I do, I do…fly! DJ Skeletor! Bring it on!”*Rocks ou…* Hey, wait a minute! That’s not right! Where’s DJ Lethal? 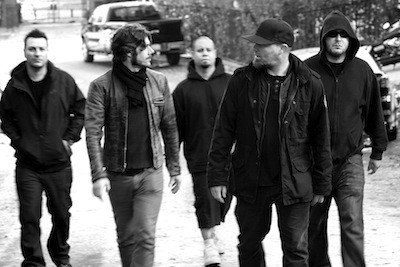 Sadly, the absence of House Of Pain’s disc-spinner from Limp Bizkit’s line-up isn’t all that feels a little bit off during this ambling Florida show. This just isn’t as much fun as it should have been. It just feels a little awkward. Like lunch with an ex who hasn’t moved on; you soon realise, you’re only there for old times’ sake and it can’t be the same.

Don’t get us wrong, this show isn’t straight-up bad. We really like Limp Bizkit and its opinion-splitting, juvenile frontman Freddy D; always have, so there’ll be no derision here, only a gloomy realisation that we’re all a little older and that it may be time to hang up the baggy shorts and baseball cap once and for all. This is the band’s first US Tour since 2006, with Durst recently citing a lack of interest in his homeland and a concession the band were “a movement in time that had passed”.

After all, the guy is 42 now, and the year 2000 was longer ago than most of us who dined on albums like ‘Chocolate Starfish’ and ‘Significant Other’ as teenagers would care to admit. But some bands age like wine and others age like milk.

Despite the surprisingly bushy-bearded Fred’s glum outlook, this show is sold out, with more red lids than you’ll ever see outside of a Bisto factory. And there are moments when the old energy that made Durst a love-him-or-loathe-him nu-metal icon rise to the surface, while eccentric guitarist Wes Borland’s down-tuned riffs are as guttural as ever. Otherwise, this is Bizkit-by-numbers stuff.

Some of the band’s signature songs; ‘Break Stuff’, ‘Rollin”, ‘My Generation’, ‘My Way’, ‘Take A Look Around’, ‘Rearranged’ and Livin’ It Up, are worth the admission price (which is much more than 3 Dollar Bills y‘all!) without blowing the roof off the place, but everything else feels like filler and the seemingly endless breaks between songs continually kill the flow.

Strangely, Durst refuses to play ‘Nookie’ (“f**k that song,” he says in response to chants from the audience) and there’s no sign of the band’s awesome cover of George Michael’s ‘Faith’, despite cranking out an awesome nu-metalised version of ‘Killing In The Name Of’. That summons more passion and energy from Fred than any of the self-penned songs that earned the band 40 million record sales.

Towards the end of the show, Bizkit also plays its new song (yes a new song!), ‘Ready 2 Go’, which will headline a new studio album on the hip-hop label Cash Money later this year. Minus the ridiculous mid-track cameo from Lil’ Wayne, it’s an absolute monster, with a booming riff and ridiculous lyrical arrogance reminiscent and typical of the band’s turn-of-the-century glory days. Maybe there’s hope yet?

“Back it’s the mother fu**in’ rock god / I’m so poked faced ladies goin’ Gaga / That’s right, it’s Freddy D, the public enemy / You know the one that had Britney, droppin’ to her knees!” You tell ‘em Fred. After all, age is only a number. Isn’t it?