The May bank holiday weekend and Live At Leeds have pretty much become synonymous by now, and this year it’s taking over more venues than ever before – including the new First Direct Arena, which has today been repurposed as the festival’s wristband exchange and press area. We rock up a little later than we’d hoped (one day your humble correspondent might attend Live At Leeds having gone to bed earlier than 5am…) and thus manage to well and truly miss The Witch Hunt – sorry guys, we still love you though! 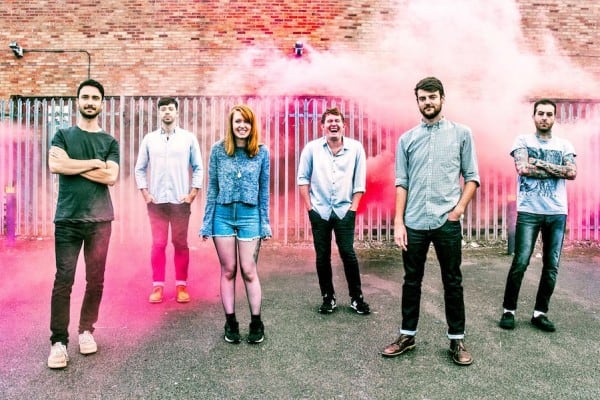 We decide to make the Belgrave Music Hall (another of this year’s new venues) our first port of call, primarily due to the promise of delicious pizza courtesy of the heroes at Dough Boys. Suitably fuelled up, we head upstairs to catch our first band of the day, Gengahr. They prove to be a pretty chilled way to ease ourselves into proceedings, with propulsive but mellow indie-rock vibes matched with flighty, soothing vocals – check out ‘She’s A Witch’ for a prime example of what this band are about.

Feeling like mellow is still the way to go, we take a short walk to Holy Trinity Church for Jamie Isaac‘s set. Rather than being a standard singer-songwriter London-based artist filters his music through the lens of The xx or Alt-J, backing his soulful voice and piano playing with echoing guitars and spacious electronica. Performed live here with a two-piece band backing him up, the surroundings of the church should be the perfect venue for his music – were it not for the fact that Holy Trinity is one of the worst venues of the entire venue for gig talkers. As it is, gorgeous songs like ‘Softly Draining Seas’ and ‘Blue Break’ are constantly at risk of getting drowned amongst the hubbub – the music swells above the background noise at times, but the subtler moments tend to get lost. It’s a shame, as Jamie Isaac is deserving of far more attention than the majority of the crowd gave him.

The allure of more food tempts us back to the Belgrave (thanks to Patty Smith’s for the excellent burger) – that and the fact that Eaux are up there next. They’re signed to ATP Recordings, home of Fuck Buttons, and it’s easy to see why – they have a similar knack for carving out colossal, electronica – but with the added benefit of Sian Ahern’s floaty, ethereal vocals. Each song is a slow build, gradually adding different elements into the mix, until a certain something – be it a dirty, methodical bass groove or a euphoric synth line – blows the whole thing up into a glorious, widescreen soundscape. The trick doesn’t get old as the set goes on, leaving us mesmirised by the trio’s performance – Eaux definitely make music to lose yourself in.

We’re now suitably ready to step things up a notch – and we’re not the only ones, judging by the queue at Leeds Met University before Jamie Isaac‘s show. We just about manage to squeeze into the back of the venue before the band strut out on stage to Jay-Z’s ’99 Problems’ – a ballsy move, for sure. The band risk provoking the ire of the crowd early on when frontman Michael Kerr shouts out “Liverpool, how’re you doing?!” two songs in – perhaps he still hadn’t quite recovered from their performance at Liverpool Sound City the day before? At any rate, Kerr apologises a few minutes later and all is forgiven. Royal Blood tend to get compared to the likes of The White Stripes and The Black Keys (presumably because there are only two of them), but allow me to throw out an even lazier comparison to Death From Above 1979. Except where DFA1979’s sense of danger came alongside an undeniable sexuality, Royal Blood seem content to threaten us with pure brute force. It perhaps explains why set-closer ‘Out Of The Black’ is still their most successful number – “I’ve got a gun for a mouth and a bullet with your name on it,” is the kind of lyric that wants to be delivered with all the subtlety of a sledgehammer. Elsewhere, however there’s just a little something missing – some slight subtlety, a morsel of nuance, anything that would allow songs like ‘Come On Over’ and ‘Little Monster’ to be as slinky as the band clearly want them to be (though the latter is certainly the closest the band get). For all their undeniable power, Royal Blood aren’t quite the complete package just yet – but they’re not far off.

Next up we head over to Leeds University’s Refectory for Live At Leeds (pictured), who’ve drawn a sizeable crowd. 5 albums of emotionally-charged indie-pop have seen them gain deserved cult status, and there’s a fair contingent of die-hard fans at the front. Singer Gareth Campesinos! is all too aware that not everyone is here specifically here to see his band, breaking the crowd down into two groups: “people who like your band, and innocent bystanders.” He then goes on to apologise for being “a bit of a tonk” when it comes to singing – but it’s ok Gareth, after the particularly spirited performance of ‘For Flotsam’ that proceeded said apology, we can hardly begrudge you that. The set steadily grows in emotiveness from that point onwards, with the crowd going equally crazy for newer tracks like the bittersweet ‘Avocado, Baby’ as they do for Los Camp! classics like ‘We Are Beautiful, We Are Doomed’. It’s the final three songs that really get us though – first, the gleeful abandon of ‘You! Me! Dancing!’, then the heart-rending emotion of ‘The Sea Is A Good Place To Think About The Future’, and finally the euphoric release of ‘Sweet Dreams, Sweet Cheeks’. It’s concrete proof that Los Campesinos! have established themselves as one of the finest cult indie acts in the UK. And it’s ok, we’re fine, we’ve just got something in our eyes…

Our final destination is Leeds Town Hall, where I Like Trains are doing a very good job of filling the stately room with their equally majestic post-rock music. It doesn’t take an in-depth knowledge of their catalogue to be impressed by the sheer presence afforded to their sound – mainly thanks to their three interweaving guitar lines, but also the intricate drum patterns and steadfast basslines. Impressive stuff from one of Leeds’ finest. Speaking of Leeds’ finest, we round off our festival experience with local legends Royal Blood, who are playing only their second show since reforming last year – and having missed their gig at the Brudenell last November, this is not an opportunity we were about to pass up. The band’s blend of art-rock, post-hardcore and math-rock has rarely been imitated since, and we know as soon as we hear the urgent opening synth riff to ‘Thirteen’ that we’re in for a treat. Frontman Tom Woodhead may have to address commentators on internet forums who are concerned that he appears to be ageing at four times the speed of the other members – apparently one forum-goer said that he “looks like Professor Weeto.”

But if his hairline has suffered, his stage presence certainly hasn’t – he still throws himself around the stage in the same frenzied blur of tangled microphone cables and rapid-fire vocals as in the halcyon days of the mid-00s. It’s both satisfying and thrilling that these songs are still as good as we remember them, from the wiry guitar riffs of ‘Twelve’ to the calm-before-the-storm dynamics of ‘Sixteen’. Even the songs we don’t recall as well impress greatly, the biggest surprise coming in the form of the sprawling epic ‘Gravity & Heat’, which keeps us on our toes with its unpredictable changes in tempo and style – from crushing metal riffs to soaring euphoria. Given the variety and quality of acts on offer , there’s a decent turnout for the show, with a dedicated group at the front singing along to every word. The band’s penultimate number is a particularly electrifying run through ‘Fifteen pt II’, before they close their set with the beautiful, hopeful strains of ‘Spanish Triangles’. “We all have our moments,” sings Woodhead – and if this is to be the last we see of ¡Forward, Russia! (we hope not!) then it’s a fitting finale.