The glistening walls of The Cockpit in Leeds on Wednesday, October 10 trembled under the strain of blasting speakers and a sweaty raucous crowd from when the doors opened at seven till the last battered attendee staggered out into the fresh air around four and a half hours later. The Southern and international line-up of Gnarwolves, Don Broco, The US rock outfit The Dangerous Summer and the headliner Lower Than Atlantis did not disappoint the Northern crowd. 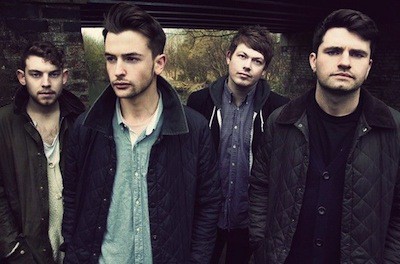 The Brighton ‘punk fu**ing punk’ers Gnarwolves started the rock assault with a line up of tracks from their much hyped 7-inch ‘Cru’ including tracks ‘History Is Bunk’ and ‘We Want The Whip!’. Having only just released their debut ‘Fun Club’ at the start of the year, these guys are a band to watch.

Next it was the turn of Don Broco. The four-piece formed in 2008 whipped up the crowd with a masterly and fast paced set, off the back of their debut album ‘Priorities’ released in August of this year.

Back from touring the US and Toronto, the relative veterans of the line-up The Dangerous Summer showed their experience of extensive performing with a confident and warm set, appreciating and feeding off the now very charged crowd.

With the somewhat cramped space become more like a sauna by the minute, the customary shoves of more people squeezing themselves into every available nook signaled the arrival of the headline act, Lower Than Atlantis. As the lights dimmed, the screams intensified as the band walked onto the set, starting hard and strong with their single ‘Love Someone Else’ from their new album ‘Changing Tune’.

This gig – amongst others since their formation in 2007 – cemented their reputation as being at their optimum best live. The music and their audience consumed off each-other energy in frenzied harmony with hits such as ‘Motor Way Of Life’, ‘Deadliest Catch’ and finally an audience sung ‘Another Sad Song’. It seems that such a potent atmosphere even contributed to the four going back to their hardcore punk routes half way through the set, reliving their ‘Far Q’ days as well as an impromptu song titled ‘Fuck’, seemingly created to reflect the raucous festivities with as much ear-piercing noise as the speakers could allow. Other tracks included the brilliantly written ‘Normally Strange’ and ‘Scared Of The Dark’ from album ‘Changing Tune’.

Along with notoriety and climbing success, Lower Than Atlantis still retain the cheeky glint of four guys having huge amounts of fun living the dream, fuelled by their fans and their love of music. This was backed up by sincerely warm words by Mike Duce, humbled by the loving fans, through a haze of steam, mosh pits and genuine youthful positive vibrancy.

The more the band hailed this gig as one of the best on the tour, the more the noise intensified. If anyone there had gone along that night with a neutral view of Lower Than Atlantis, wanting to check them out for the first time, it is guaranteed that they will want to see them again. This reviewer is hard pressed to find a negative in a set which showcased their music both old and new, along with a signature stand-out live performance.