It’s a muggy Monday evening in old York, and The Basement of City Screen cinema is abuzz with clamorous chatter and a pervading warmth of spirit. There are a lot of us here, and we’re here because – true to form – promoter Please Please You has put together a pretty irresistible lineup of acts for the night, all of whom represent a sort of alt-folk subgenre which is a pretty ideal accompaniment to a mellow summer’s night. Tonight’s formerly York-based headliner Luke Ritchie (along with two notably excellent backing musicians) is here to promote his new album ‘The Water’s Edge’ which he recently launched at London’s Bush Hall. You’ll hear about how enjoyable his set proves later in this article. 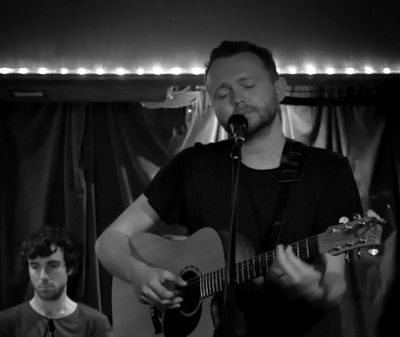 First things first. The evening’s entertainment commences with a set by Epilogues, a fraternal acoustic guitar duo who you actually quite direly need in your life. Formed on the basis of founding epilogue Mikey Donnelly’s percussively fluid rhythm guitar parts and embellished with the delicate lead flourishes of the terrifyingly prodigious Joe Donnelly, the sound of Epilogues’ music is enchanting – at times jazzy, at times Heaton Kenson-ly hip, and often totally mesmerising. Add into the equation the older brother’s velveteen voice which flits around acrobatically with both virtuosity and emotion, and it’s clear that Epilogues are something rather special. Stand-out track ‘Walls’ closes out their beguiling set, and it’s soon time for the night’s second act to take the stage.

Said second act is solo artist Alisia Casper, who brings a slightly darker note to the evening with her quite haunting music. With a combination of deceptively twee guitar parts and an anguished croon which straddles the stirring and the jarring, Casper sounds much like an anglicised Joni Mitchell might whilst in the throes of an existential crisis. It’s arresting stuff and accordingly the crowd respond incredibly well. What Alisia Casper does definitely wouldn’t be everyone’s cup of tea – fans of light-hearted and easy-going music probably need not apply. The singer from Leeds would undoubtedly prefer them not to at any rate.

Slightly softer on the ear whilst still pleasingly nuanced is headline act Luke Ritchie. His set which builds from a gentle solo intro with Luke on guitar and vocals proves to be a varied and enjoyable affair, blending brooding lyrical references to a modern Britain bathed in the unnatural light of mobile phones with generally very pretty vocal melodies, seamless guitar playing, the marching shuffle of snare-heavy drumming and lurching double bass. It’s folk music for our time – sourced from and relevant to contemporary experience, rooted in traditional instrumentation and craft but never redundantly nostalgic or vacuously derivative. Of all the quite varied songs the trio played, this scribe’d recommend you look out for slightly White Stripesy stomper ‘Shanty’ – it’s the best of a good bunch.