It takes some fairly big balls to open the show for your own band. Or in this case, bands plural, as the combined membership of Manchester Orchestra and The Goddamn Band are first on as Bad Books. The dancing harmonies between Kevin Devine (TGB) and Andy Hull (MO), show the frontmen in a more twee and sentimental light, neither holding anything back for the rest of the night to come. Hitting tracks like ‘Forest Whittaker’ and ‘Petite Mort”, BB channel the mystique of Modest Mouse with the charm of The Postal Service. Kevin Devine and The Goddamn Band show promise, but lack the strong melodies of Bad Books. 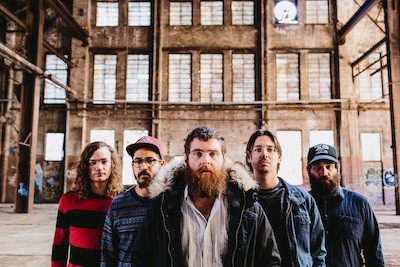 Devine keeps the energy going though, playing with an enthusiasm which sadly isn’t matched by the strength of the material. Manchester Orchestra drive their early set through guttural bass peppered with Andy Hull’s masterful vocals which flit between confident restraint and full-tilt bellowing. Picking out tunes that suit the raw, nutsy tone of their recent full length, ‘Cope’, opening track, ‘Pride’, feels like an embryonic version of the band’s new, back-to-basics direction. The riffs feel more pronounced, the bass is more driven; locked in with a kick-drum that goes straight through your chest and soul.

Less focus is on the massive production and orchestral nuance explored on ‘Simple Math’, with the band showing their back-catalogue’s raw potential by stripping away the glitter. In front of a slightly subdued crowd, MO toy effortlessly with their older tracks; theres a different drop-beat here, an extended solo section from Hull there. ‘Pensacola’ and ‘Pale Black Eye’ blend seamlessly into the lo-fi rawk of ‘Every Stone’ as the show gains momentum and everyone settles into the pounding pace.

While Manchester Orchestra plough through hit after hit with barely a break, you’d be forgiven for thinking they’re knackered; simply churning through the set to get to the end. They have, of course, all played about three gigs tonight. The first “stage banter” arrives late in the set; a story about how Andy fell down the stairs at Santiago’s and couldn’t sleep on his right for a year. The story is perfectly plausible. The announcement, “This song’s about that…”, before launching into masterpiece ‘Simple Math’, is a touch less believable. As a finale we’re treated to the duelling guitars of ‘Everything To Nothing’ and ‘Deer’, with the show slowing to a quiet intensity that’s almost louder than the pure beef of the earlier set. MO boil their songs back to their essence, mirroring the stark ‘Hope’, their minimal reimagining of ‘Cope’. It’s a performance so delicate that you can just about hear the peeling shuffle of Vans against the sticky floor. Make no mistake though, tonight has truly been the Andy Hull show. The serial frontman flaunts his versatility in a final solo number, slowing everyone’s pulse with a perfect version of Bad Books’ track ‘Pyotr’, given new context by the introduction (I won’t spoil it, just Google ‘Pyotr Tsar Head Jar’ to read the story). The anti-crescendo of the encore is only really spoiled by Kevin Devine re-joining the stage, whose promise earlier in the night now pales in comparison to the sheer incandescence of Hull. Tonight has been a sales pitch. Even with the conspicuous absence of killer classic ‘Virgin’, Andy Hull has shown that whatever he touches turns to gold-plated gold. And if we were ever in any doubt, the final song (a surprise cover that the Youtubers will recognise), sends everyone away with a grin bigger than his tour PRS bill.