Metieval has been known as one of Yorkshire’s best metal events and with good reason. There is a buzz of excitement flowing through the crowd as the first band, The Occupier, take to the stage to open up for the 12-hour event… 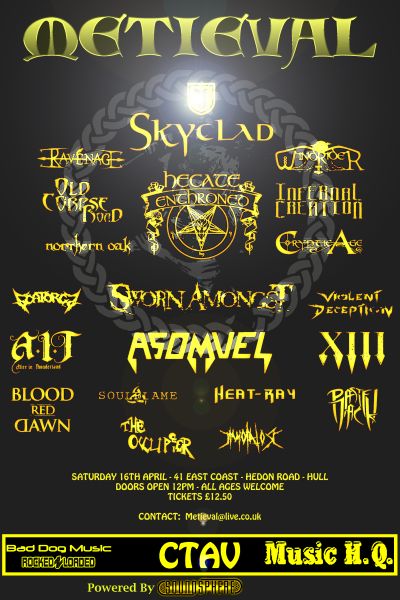 Beginning their set with ‘Sonny Chiba’, they receive a great response from the near-capacity crowd. This front man clearly knows how to work his audience as he interacts with them extremely well during and between songs. Indeed, The Occupier stand out as one of the best bands of the night and are far too good to be the opening act.

Meanwhile, local classic rockers Pastel Jack perform a stellar set, including a brilliant cover of Dio’s ‘Holy Diver’ and a soulful performance of their own song ‘Condemned From The Start’. Local group Windrider come next to take the stage. The collective produce an energy-filled set with powerful songs such as ‘Across The Seas’ and ‘The Hall Of The Slain’ from their recent EP ‘A Warrior’s Tale’. The only down-side to their performance though, is the playback of the keyboard sections. Again, as a young band these are improvements that can be made with more live experience.

More folk metal finds its way on to the stage at Metieval in Northern Oak. They perform some real crowd pleasers in the form of ‘Madness Of The Feral Moon’ and ‘Silvan Lullaby’. Up and coming thrash metal band XIII are next to take the stage, bringing with them some seriously aggressive riffs which are warmly welcomed by the crowd for the song ‘Eclipse’ specifically.

Old Corpse Road are the next to perform, with an immense set while Bridlington classic rockers Alice In Thunderland are certainly another highlight of the night, performing two new songs from their next album ‘Frozen’. They also produce some classic tracks from their album ‘Into The Darkest Night’. Black metal-influenced Infernal Creation along with the blues-styled Soulflame are also warmly greeted by the crowd who greatly appreciate their efforts as well. Hecate Enthroned, however, steal the show as they begin to perform. With a tight set and great stage presence, they are certainly the best band of the night. Sworn Amongst make a rare appearance at Metieval to follow-up, with a brilliant performance before the beginning of the Scandinavian leg of their European tour.

As rumours begin circulating that the headlining act Skyclad had pulled out but these rumours are soon squashed as they take to the stage to perform their set, which consisted of songs from each album including some of their greats like ‘Spinning Jenny’ and ‘Parliament of Fools’. Though their performance is nothing compared to that of Hecate Enthroned. After all the great performances of Saturday, no one can deny why Metieval has earned its reputation over its short existence. We will miss you.