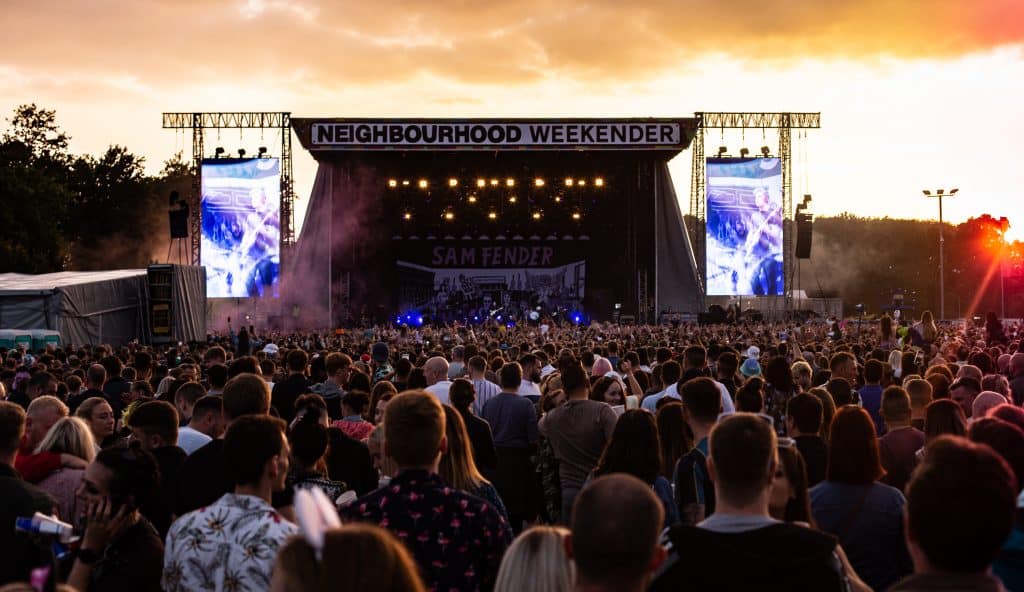 We’ve been saying live music and festivals are back for weeks now but most big events have needed to be on the Government test scheme. Not so for ‘Neighbourhood Weekender’ and it is to the credit of the sponsors and hard working event production team that this festival took place at all – without viable government insurance and so soon after restrictions were lifted. The gamble paid off though, as this was a huge success and a brilliant weekend for everyone that attended.

NBHD is an independent set up with a community feel, and it is really just for the North West of England. Placed in a fairly central position of Victoria Park in Warrington, there are NO camping facilities, and so you are reliant on bus/car/taxi/train to get you there and back each day. The curfew is 10:30pm so not too late for those local transport options – this works really well, and means you are not having to schlep there with a ton of camping gear and have the hassle of packing it all up.

This is only the third year of the NBHD Weekender – described as an indie festival, it certainly lives up to that billing, and hits that sweet spot of enough artists that the thirty or fortysomething Mums and Dads will know, and that they can safely bring their teenage kids along to, who themselves are more likely to be watching the younger bands – future year’s headliners.

One of the stages (Viola Beach) is reserved for those newer artists and then the Big Top (2nd Stage) and the Main Stage hold those that require a larger audience to view. With lots of space around – it felt really safe at all times, and the amount of bars here meant that there was never a long queue to be served – the ratio of bars to people were actually the best I’ve ever seen at a festival, this did mean that there were a couple of areas where the blokes couldn’t quite hold it in any longer, and even for them there were urinal troughs placed open air against walls – something that Leeds Festival organisers should take note!

Foodies were well provided for with lots of quality vendors spread over the site and a couple of rides there for the thrill seekers too. It is a pretty much a perfect set up for the size that it is, and with great weather for the weekend there really isn’t a better place to be, to revisit your memories of live music with some of the best bands from the early 90’s through to current break-throughs.

What about the music? Oh yes that’s why you’re here right!!

I started early on Saturday with The K’s – nice bunch of lads with big dreams and some indie tunes to match, they have drawn a good crowd to the main stage for so early in the day and pull off a surprisingly enjoyable set – what a warm up! 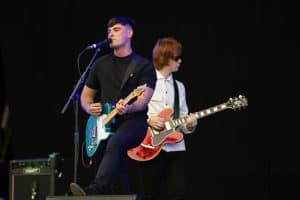 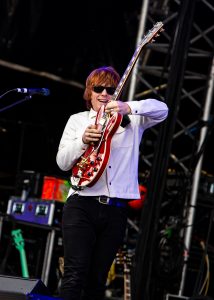 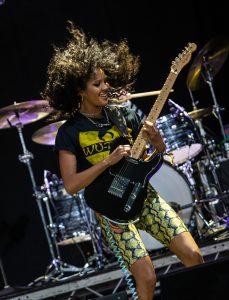 Elsewhere in the Big Top newcomer Aziya proves she can hold a good rockin tune and play a mean guitar. There is a guy down the front who has travelled all the way from New York to the UK for live music and festivals, he’s loving every minute and she claims him as the best punter in the tent – we can’t quite match his enthusiasm at 13:30 on a Saturday afternoon – maybe after a couple of drinks.

We are really in the Big Top for Liverpudlian Zuzu who we saw tearing up Leeds Festival last weekend – expecting a similar set there was a slight technical hitch with the sound at the start. This became the only glitch in the system at the festival as every artist on the Big Top stage had problems which delayed the start of their set. It didn’t stop the party though as indie djs provided plenty of hits to dance and sing to, if the live acts were not ready. Zuzu eventually completely smashed it again, and there is no stopping this scouse girl from taking on some bigger stages next year. 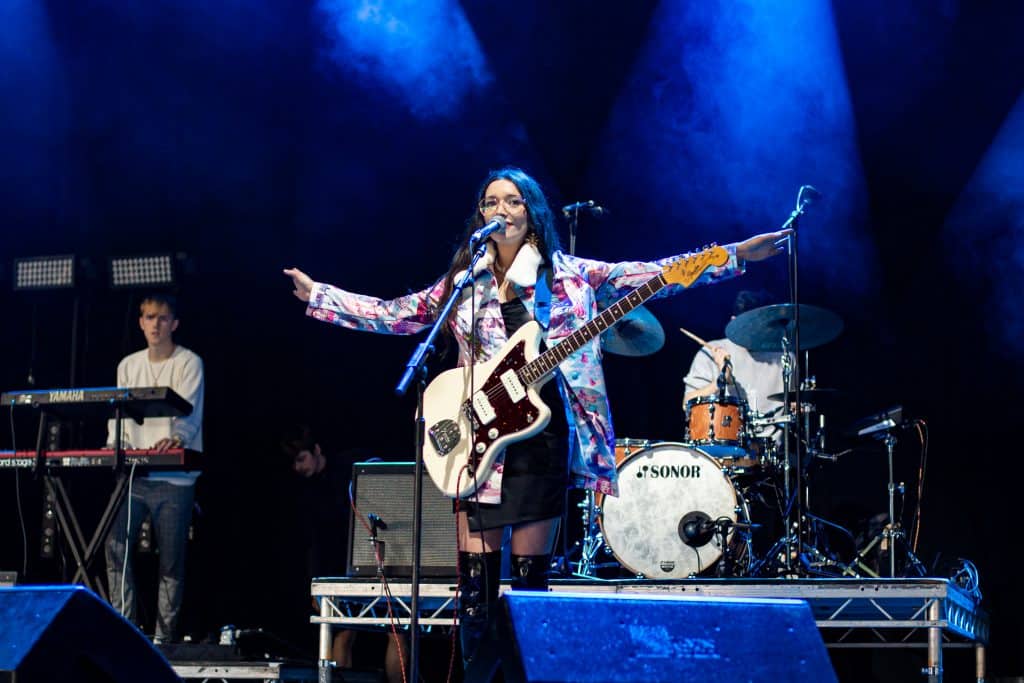 I’m missing The Sherlocks deliberately (completely bored of them – although I hear they went down well), instead I chose to watch a young Scottish band called Spyres who were quite superb, and then Self Esteem back in the Big Top.

Rebecca Taylor aka Self Esteem is a no nonsense girl from Yorkshire and woe betide you if you can’t get the f**king sound in her girl singers/dancers ears. They were reduced to four songs because of the cock up, but there was a brilliant piece of stand up from Taylor who kept the crowd going by asking what drugs they’d taken. They packed a lot of sassy attitude into those four songs which made us all wish they could have stayed for a bit more but in the end she summed it up with “Even my top is broken now…so…you’re welcome”. After that The Coral were a bit of a damp squib on the main stage until they played ‘Dreaming of You’ at the end which did get everyone up and dancing. 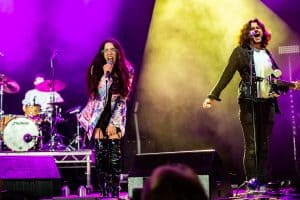 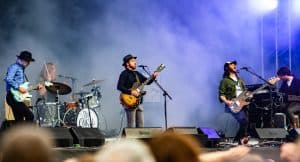 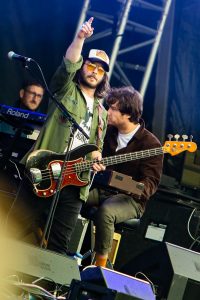 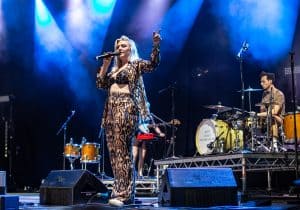 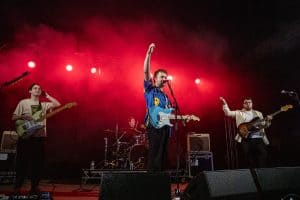 Jake Bugg was announced as the special guest on Main, and as The Snuts had pulled out from the day, Vistas – a much better Scottish indie band IMHO replaced them. Its the 2nd time in a week that I had seen this band play, and they have this completely unassuming way of just tearing the roof off a place with great indie ladish anthems, something The Sherlocks could learn a lot from.

I then have the mother of all clashes, after girlie indie pop The Big Moon finish on the Big Top, its either my hometown York legends Shed 7 on the Main Stage, or, I get front row for the finest band to emerge in the last 3 years – The Murder Capital. I’ll be honest, the main reason I’m here is because they have travelled across from Ireland to this festival and I’m not going to miss this explosion of pure energy and drama from a 5 piece, the likes of which most of the audience will never have witnessed before. Their performance is suitably epic, they manage to include a new song which is more akin to Radiohead than anything they have done before, which bodes well for the 2nd album. James McGovern manages to leap into the crowd for a spot of surfing during ‘More is Less’ and I end up helping him back over the barrier. That was it, the highlight of the weekend and after that nothing could possibly top it. 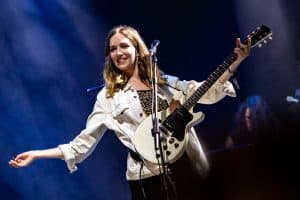 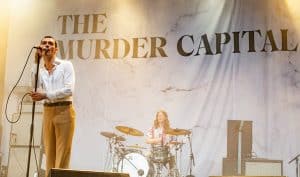 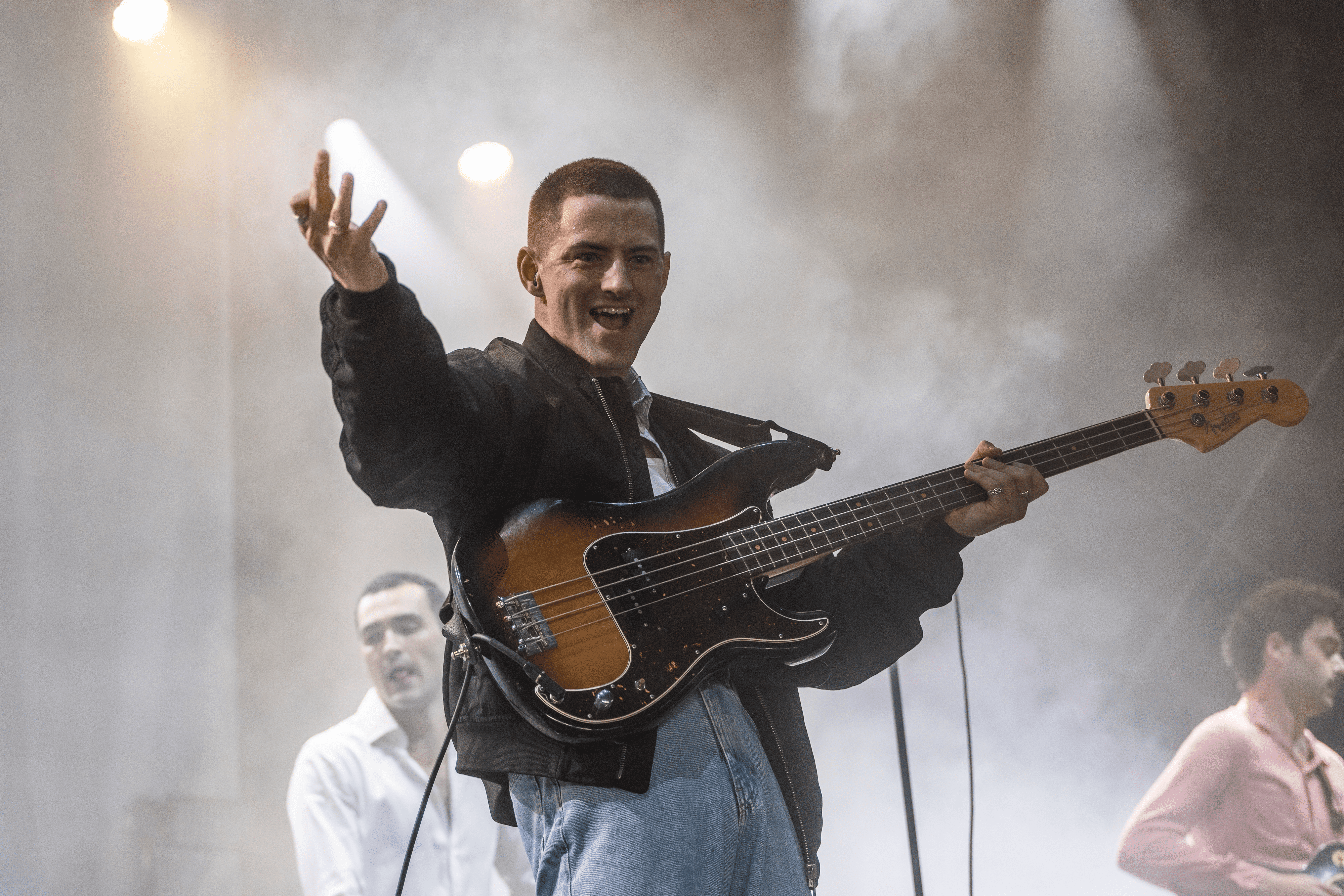 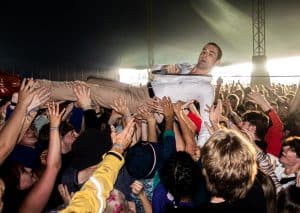 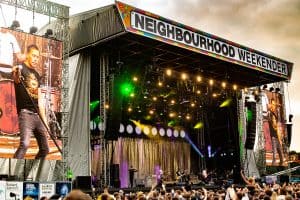 I raced back to see Shed 7 finishing ‘Chasing Rainbows’ to a big reception from the crowd, and then stood for a while watching the sun set listening to Sam Fender’s Springsteenesque musings. He will without doubt be headlining this festival within the next few years and even had the grace to stop the show to help a girl in need of medical attention. 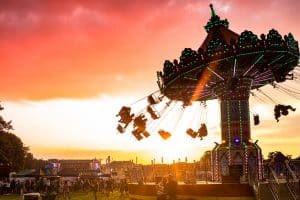 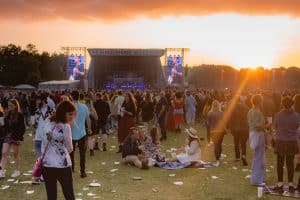 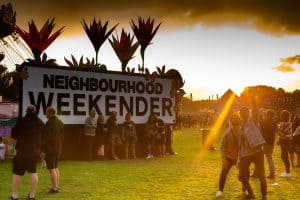 However, after a bit of food and fancying a bit of a bounce there is no better place than at the front of a Reverend and the Makers show, as the Rev himself will repeatedly say “Banger after Banger”, or, “From the front to the back lets bounce”. He’s not wrong, and from the opening ‘Bassline’ through to ‘Heavyweight Champions’, we have a non stop bounce-a-thon, which manages to shake the big top to its foundations, a brilliant comeback and showing that their festival credibility has not waned in the last couple of years. 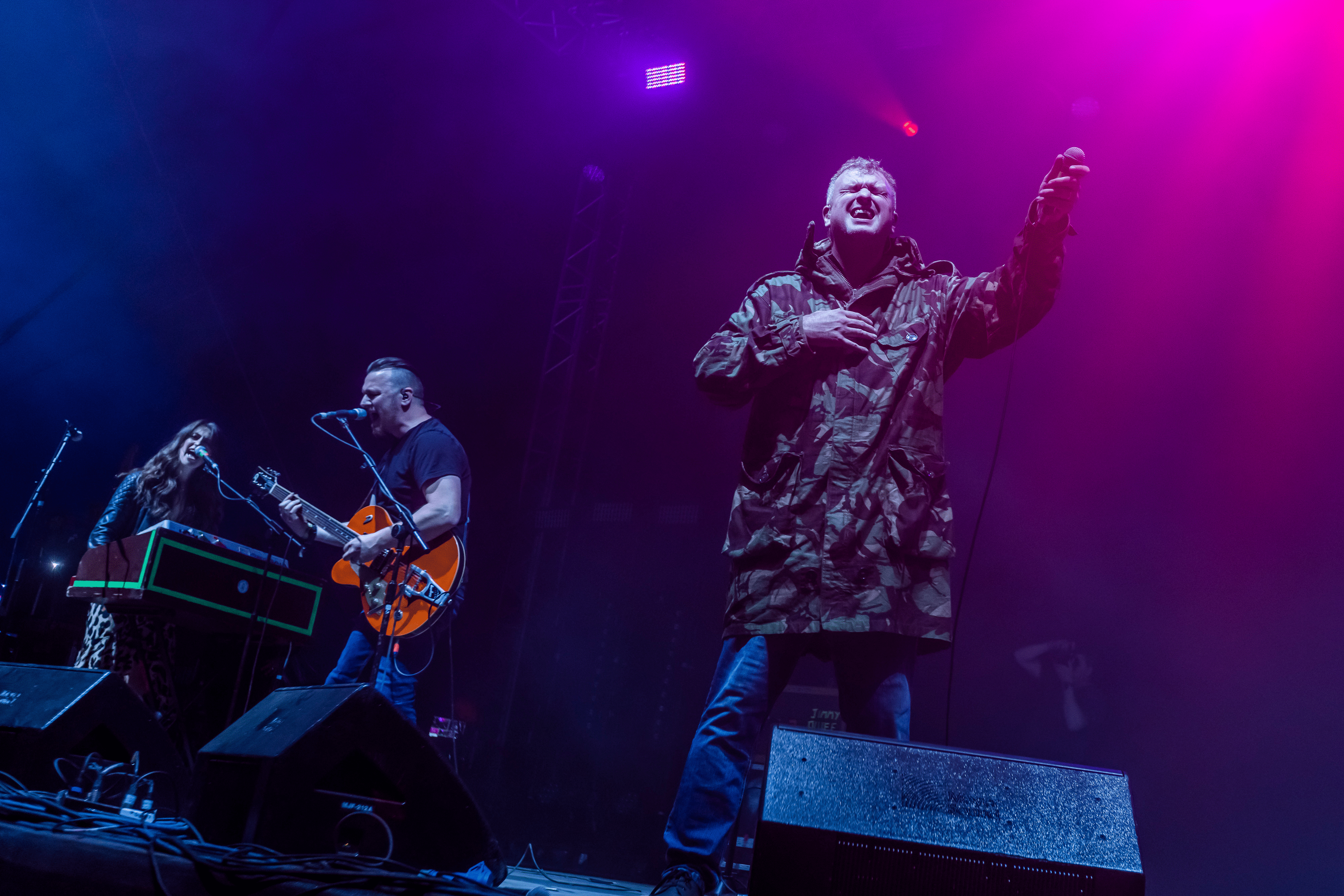 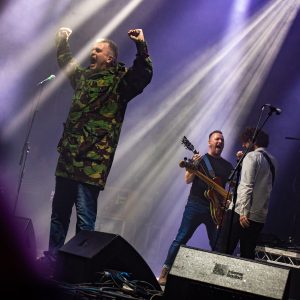 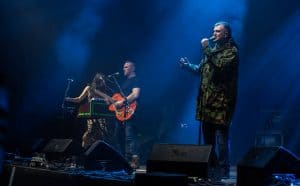 Having watched two sets from Easy Life last weekend, I’ve decided to view a bit of James from a distance. They are a perfect headliner for an Indie Festival, provided that they are playing the hits – which they thankfully did! ‘Born of Frustration’, ‘Sit Down’, ‘Sometimes’, ‘Sound’, ‘Laid’ and ‘Come Home’ a brilliant end to a pretty much perfect festival. 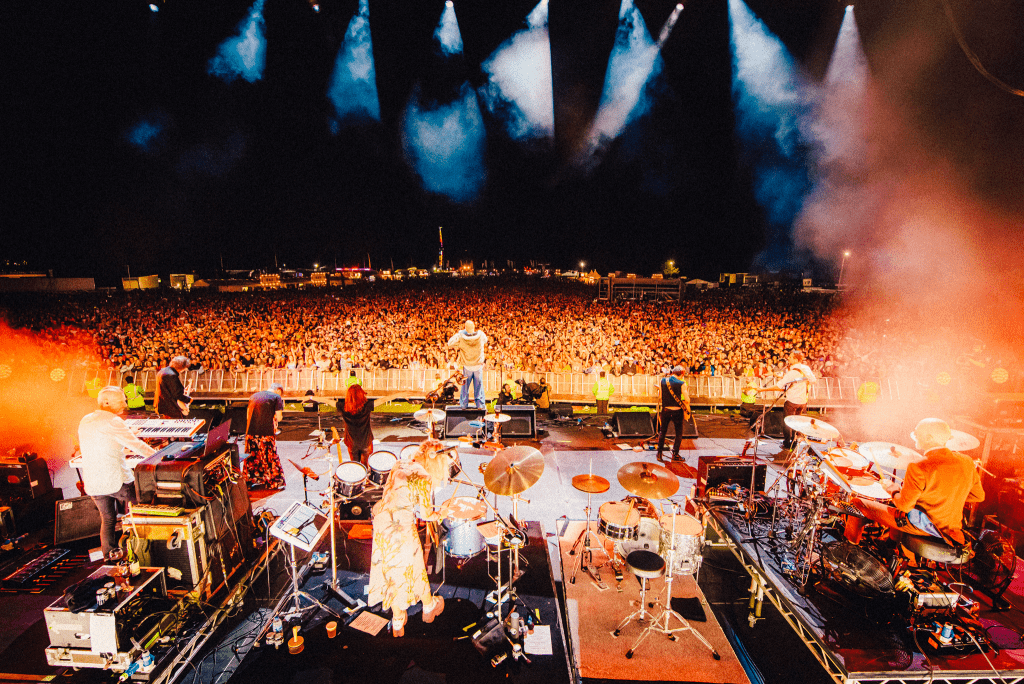 My first visit to NBHD Weekender and I saw enough in 1 day to think that they really set the template for inner city future mid-sized festivals. Its the perfect size, with 3 stages and I only really had 1 significant clash of what I wanted to see. If we can replicate this across the UK then live music and festivals have a very fine future ahead. I shall be back next year and will stay for longer!!

Next years dates are in May so watch out as an announcement on line up could be imminent.