For seventeen years New Found Glory have been a household name in the pop punk world, influencing countless bands and delivering an unrivalled endurance in their live shows. To honor their newest album, Resurrection, Saturday night saw the streets of Leeds overrun by pop punk fans of all ages as they poured into the O2 Academy to see the legendary Florida band at the Pop Punk’s Not Dead Tour. But of course, it wouldn’t be a true pop punk gig without a handful of supporting bands to get the crowd warmed up with some precautionary moshing and genuinely good performances. 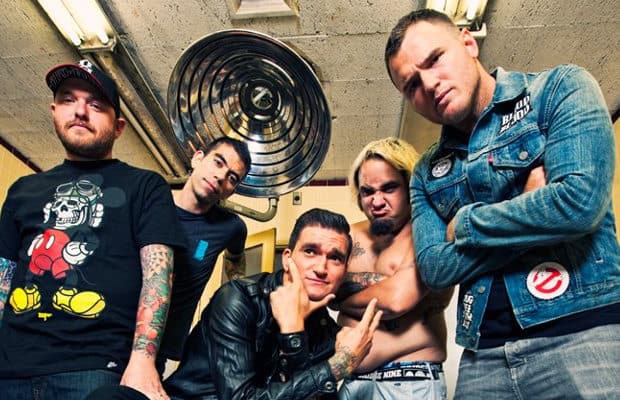 The stage is christened with a dynamic set from Dublin rockers, Only Rivals, followed by a spirited and catchy as hell performance from Candy Hearts. As the night goes on and the venue slowly starts to fill with hungry fans, the auspicious State Champs take the stage to deliver a lively set that sees some of the night’s first serious crowdsurfers being wafted toward the stage, setting the tone for the rest of the evening. Finally for the openers, The Story So Far drop an intrepid set with front man Parker Cannon telling the crowd they’re ‘not rowdy enough’ and encouraging circle pits to start the evening off in style.

As the lights dim and the nearly packed venue fills with cheers and screams from old and new fans alike, the overwhelming anticipation in the air is unmistakable. To build on that anticipation, the stage remains black bar a video projection of famed American Actress, Judy Garland singing ‘Battle Hymn Of The Republic’, leading to an emphatic entrance from New Found Glory, greeted by screaming fans. The walls of the O2 Academy echo with ‘Understatement’, bringing the energy of the crowd to the brim right from the start.

The set continues to drop beloved classics with ‘Better Off Dead’, ‘Hold My Hand’ and ‘Hit or Miss’ as the pop punk pioneers exhume an intensity that shows they’re at the top of their game, even after seventeen years of being together. With a welcomed combination of old and new songs such as ‘Selfless’, ‘Something I Call Personality’ and ‘Don’t Let Her Pull You Down’, New Found Glory show a pure appreciation of their fans through guitarist, Chad Gilbert’s exclamations of gratitude throughout the set. The band’s unwavering dynamic sets their live show apart from others, made obvious through the enthralled crowd screaming each word and melody back to vocalist, Jordan Pundik, who isn’t caught standing still once. The night continues with a generous dose of pits in the crowd through the energetic and constantly entertaining show.

As the night draws to a close the first part of the set ends with ‘My Friends Over You’, lifting the crowd from their feet to shout the lyrics of their youth in an energetic ‘final’ song. After leaving the stage to fervent chants from the crowd, the band return for the encore with bassist Ian Gruskha followed back onstage by drummer Cyrus Bolooki, Pundik and Gilbert to deliver more classics in ‘Sonny’ and ‘Forget My Name’ followed by ‘Intro’ straight into ‘All Downhill From Here’. The Pop Punk’s Not Dead Tour brought pop punk in its purest form to Leeds for an unforgettable night of pints, pits and power chords.