Tonight is a night so full of support and care that we get lifted into the air and left there to hover in appreciative spirit for the entire evening. Yeah, we can float now, isn’t it cool? The events in the Philippines are tragic to say the least, but if there’s one way to bring people’s undying support together it’s through music, and the line-up tonight is an incredible one, full of lesser known and better-known artists who we now believe could solve the world’s disasters. And these guys aren’t playing for personal gain, hell no. These bands play music only because they love it, and tonight is stark proof of that. In fact, the donations and efforts being made could potentially change this cynic’s perception of the human race. 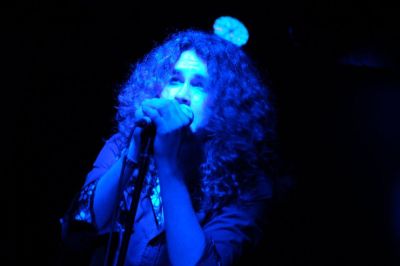 The night kicks off – well, “kicks off” wouldn’t be an appropriate way of describing it, this first artist is fused with a fascination for the melancholic – with local solo man Nathan Luke who steps up with an acoustic guitar, strums gently (in a similar fashion to how a working man might start the day with a few menial tasks before the heavy duty stuff takes him over) and then moves the audience with his emotion-fuelled vocals. Just wow! Music is never complete without the heartfelt words of a hopeless romantic. Then Zak Ford takes the stage with more hard-hitting vocals, enhanced by the gliding and plucking of a cello. Sweet sounds!

Then comes Boss Caine, an act this writer has been eager to see for a while now, and the almighty low mood instigator, Disappointment, thankfully didn’t make an appearance. Thank you for staying at home today, Disappointment, you’re a c*nt anyway. Err, where were we? Yes, this band are a joy, front man Daniel Lucas approaching the mic with reverence as well as mass talent. Their tracks put you into a phased out, speculative mindset similar to the way you feel when you listen to Springsteen or Neil Young. Speaking of which, the band end their set by bringing on guests to cover Young’s ‘Helpless’, a meaningful tribute, and one of the many highlights of the night, and then the Caine crew leave the stage for Chris Helme to take the centre, and we are greeted with more of those bliss acoustics, but this guy brings a more electric sound to the table. Wonderful songs, wonderfully performed. Check him out if you haven’t already!

Now the night gets flipped around and rocketed into the…too much. …And The Hangnails blast out some serious energy. If you’re one of those guys who think that two pieces can’t produce powerful as all-hell tunes, this band will change your mind. Those drums are so f*cking epic, if you closed your eyes you wouldn’t believe the madness was emanating from a minimal kit. The vocals and guitars stretch and encapsulate in equal measures. And finally, without forgetting about the absence of Aimie J Ryan, We Could Be Astronauts take the pace down a notch but bring out the big guns. There’s some serious variety going on here, every track pumped with a hundred paces, yet another shining reminder of why we love rock so much. Take to the skies guys, and go beyond. Become astronauts of musical fusion. Or don’t, if that’s your desire. In the crowd’s eyes you already are.

Many thanks to all the artists who played tonight! A wonderful evening for a wonderful cause.